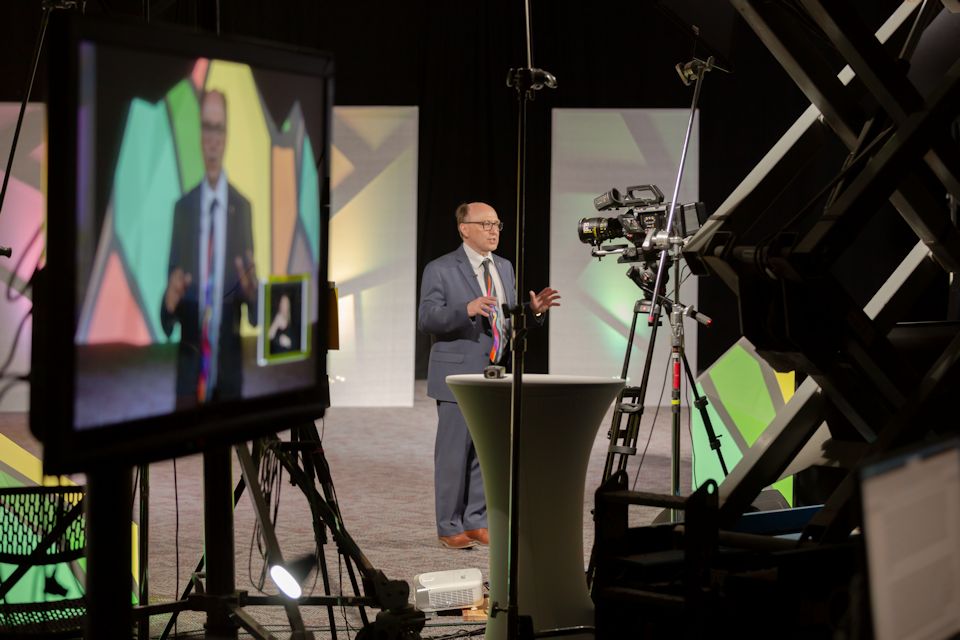 Bishop David Bard has not missed an annual conference session since 1984. He believes that conference can be a means of grace, whether the sessions are held in-person or online.

Let me confess to you that I really miss not being together in person for annual conference. I miss the handshakes and the hugs. I miss not being asked for a picture. I miss preaching to a gathered group of people. I miss laughing with you, singing with you, praying with you, and even helping us work through tough issues together. I am exhausted when it is all over, but it is joyous exhaustion.

Among the joys I will miss again this year is meeting the children of clergy or lay members who are also part of annual conference. It has been my pleasure to shake the hands of youth moving toward adulthood, to get a hug from a child who was having such a good time with his annual conference friends he did not want to leave, to hold a baby. I am very much looking forward to being together in person next year.

I was not an annual conference kid myself. The very first annual conference I was registered for was one I never made it to. I was a seminary student, and I was to be interviewed by my district committee on ordained ministry at the annual conference session that year to be certified as a candidate. That was important to me because I was planning on graduating from seminary a year later and wanted to be eligible for probationary membership when I graduated.

Julie and I were living in the Minneapolis-St. Paul area while I was in seminary, and the Minnesota Annual Conference session would be in Duluth that year. Julie was working in downtown Minneapolis, and we were expecting our first child, due about six weeks later. I packed the car and went to pick Julie up from the bus stop to head for Duluth. The only problem was our son was anxious to come into the world. Julie’s water had broken. She ended up in the hospital. Our son, who we named David, was born a week later.

I never made it to annual conference, but my district committee was gracious enough to have me listed as a certified candidate, pending a later interview, so I would be eligible for probationary membership when I graduated. That was 1983, and I have never missed an annual conference since 1984.

Conference. It is a unique feature of the Wesleyan or Methodist stream of the Christian tradition. While we often think of the decision-making authority of conference, its meaning in our history goes much deeper. In his book The Methodist Conference in America, the well-respected Methodist historian Russell Richey notes that John Wesley recognized Christian Conference as one of five instituted means of grace, the others being prayer, searching the Scriptures, the Lord’s supper, and fasting (p. 19). Richey writes about the meaning of conference, “On conference hinged religious time, religious space, religious belonging, religious structure, even religiosity itself” (13). Early Methodists, according to Richey, “did church, conducted business, shaped themselves in a gracious, conferencing fashion. Conference was spirituality, community, God’s order. It was revival, fraternity, and polity” (202).

In his own writings about conference, contained in the volumes of “Minutes of Several Conversations between the Rev. Mr. John and Charles Wesley, and others,” we get a sense of the profound hope this gathering contains for Methodism. “It is desired that all things be considered as in the immediate presence of God. That we may meet with a single eye, and as little children who have everything to learn. That every point which is proposed may be examined to the foundation, that every person may speak freely whatever is in his heart, and that every question which may arise should be thoroughly debated and settled.” (The Works of John Wesley, v. 10, p. 844). The reality, as is suggested in the title to the “minutes,” was that John Wesley himself settled many of the debates.

Of the quality of dialogue for Christian conference, Wesley also proposed a high ideal.  “Are we convinced how important and how difficult it is to order our conversation right? Is it always in grace? Seasoned with salt? Meet to minister grace to the hearers?” (856-857).

Methodist history holds out high aspirations for conference, and we know we don’t always attain them. Yet I don’t know as I have ever left an annual conference, as frustrating or challenging as it may have been, without also knowing that I had been touched in some deep and profound way by God’s grace. Worship is often wonderful, particularly singing together. We remember those who have served with us and are no longer with us. We celebrate with gratitude those retiring from active ministry. There are handshakes, hugs, smiles, pictures, conversations. The service of recognition, commissioning and ordination rarely fails to touch something deep within.

I remember the year our son, that boy born in a way that interrupted annual conference, came forward at the call for persons feeling God’s Spirit moving them, perhaps to ordained ministry. He did not end up going in that direction, but it was an important moment for him and me.

Annual Conference is so different when done virtually, and there is much I miss. At the same time, even meeting in this way, annual conference can still be a means of grace, a way to note religious time, religious space, religious belonging, religious structure, even religiosity itself. We have the opportunity, even online, to conduct ourselves in a gracious, conferencing fashion and to be religious community. Due to the wonders of technology, more people have the opportunity to share in some of the special moments of annual conference.

As I head to annual conference this year, as every year, I go expecting that in some way, it will be a means of grace.  May it be so for us all.