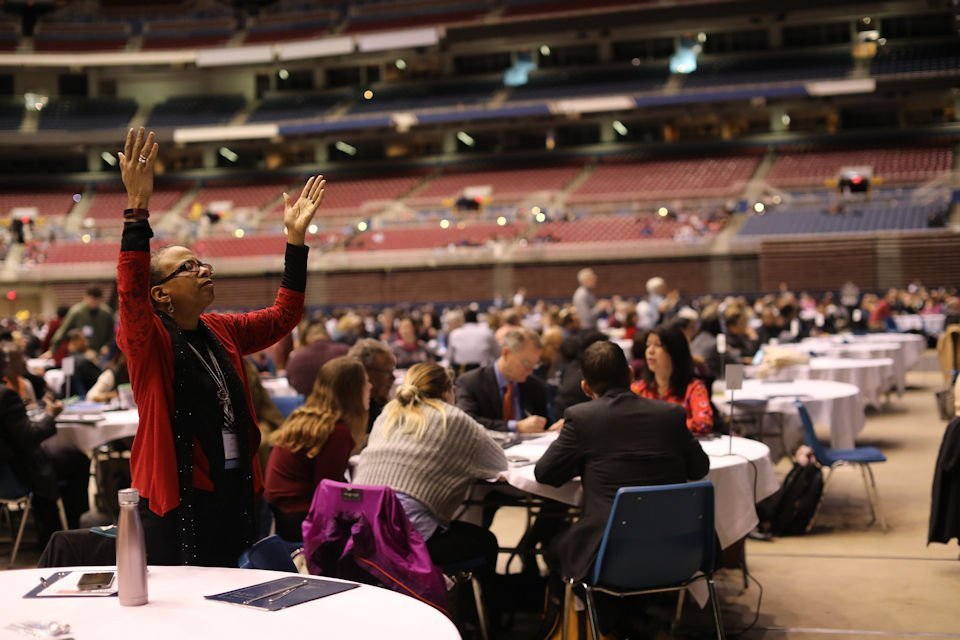 Cheryl Jefferson Bell, delegate (standing) from the Great Plains Conference, raises her hands in prayer during the Feb. 23 morning of prayer at the 2019 Special Session of the United Methodist General Conference in St. Louis. ~ umns photo/Kathleen Barry

Will the denomination act toward schism or splinter? The author says it’s still too soon to tell what might happen. He urges careful consideration of consequences. 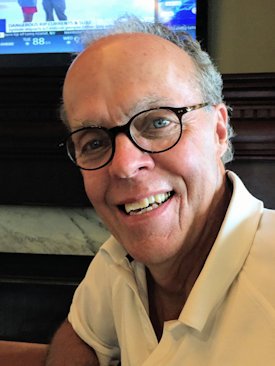 Before and after the Special General Conference in February, there was a lot of conversation about the potential for “schism,” often compared to the division which occurred in 1844 when the Methodist Church divided geographically over slavery. The northern half remained as the Methodist Episcopal Church and the southern conferences organized as the ME South. Both branches thrived as major denominations for almost a century until they reunited in 1939. Prior to last month’s General Conference, the Wesleyan Covenant Association (WCA) was preparing for a such a break, having tentatively called their “Convening Conference” for April, 2019.

Several months earlier, the WCA released the results of their survey of 9,102 people on their email mailing list; 2,666 responded. They asked a variety of questions about what would happen depending on the action of the 2019 General Conference. For example, “If the General Conference adopts the One Church Plan, I think my local church would leave the UMC.” About 1,700 persons responded “agree” or “strongly agree”. In other words, 1,700 individuals thought their congregation would leave if the One Church Plan passed. There is no way to know how many congregations were actually represented, but it if all these responses reflected individual congregations, that’s 1,700 congregations out of 31,867 United Methodist churches in the USA. At the time, Mark Holland, writing for United Methodist Insight said, “The reality is that the UMC is not facing schism so much as a splinter by one well-organized group.” (United Methodist Insight, January 23, 2019)

Now, of course, the tables have turned. The One Church Plan was not approved and the Traditional Plan supported by the WCA passed. Now the question is, “What about the “progressive” side? Will they decide to splinter?” Since most annual conferences in the U.S. have passed resolutions in opposition to the “Traditional Plan,” will the WCA still decide to leave? In all but a few conferences, the election of delegates for the next General Conference has been dominated by centrist and progressive candidates with key leaders of the WCA rejected. How will that affect the election of bishops at the 2020 jurisdictional conferences and the action of the 2020 General Conference?

Here in Michigan, for example, immediately after the Special General Conference, a large number of clergy and laity witnessed to their opposition to the action of that Conference in the “Michigan Statement” (www.michiganstatement.org). Then in June the annual conference session moved in the same direction, including the approval of two openly gay candidates on the track to ordination. With the same thing happening in almost every conference, it does begin to look more like a schism than a splinter.

Or what if the WCA breaks to the right, the progressives break to the left, leaving the hulking skeleton of what we know as The United Methodist Church somewhere in the middle? Could we potentially have three brands of Methodism? What becomes of the Central Conferences in the Philippines, Africa and Europe in any of these scenarios? Since particularly Africa is heavily dependent on the vast amount of funds flowing from the U.S., how would a schism or a splinter affect them? Where would Africa University get its support? And what would become of the Publishing House and the extensive network of seminaries, colleges, universities, hospitals, nursing homes, social service agencies and denominational boards, commissions and agencies which have been built up over 200+ years of United Methodist history? What about the significant assets of the denomination in buildings, properties, endowments and reserve funds? If push comes to shove, how many clergy would be willing to withdraw and cast their lot with a much smaller itinerant system with fewer opportunities for their future ministry in either the WCA or the progressive camp? More importantly, what does it say about our witness in a divided world when we as the church cannot find a “way forward” together?

I am not a prophet, but it seems clear we are headed for either a schism or a splinter. In any case, all these questions and many more have yet to be answered. It is too early to know the full impact of St. Louis or this round of annual conference sessions. There are numerous intended or unintended consequences of any kind of schism or splinter and before we move in that direction, United Methodists should think long and hard about what it will mean for the future.