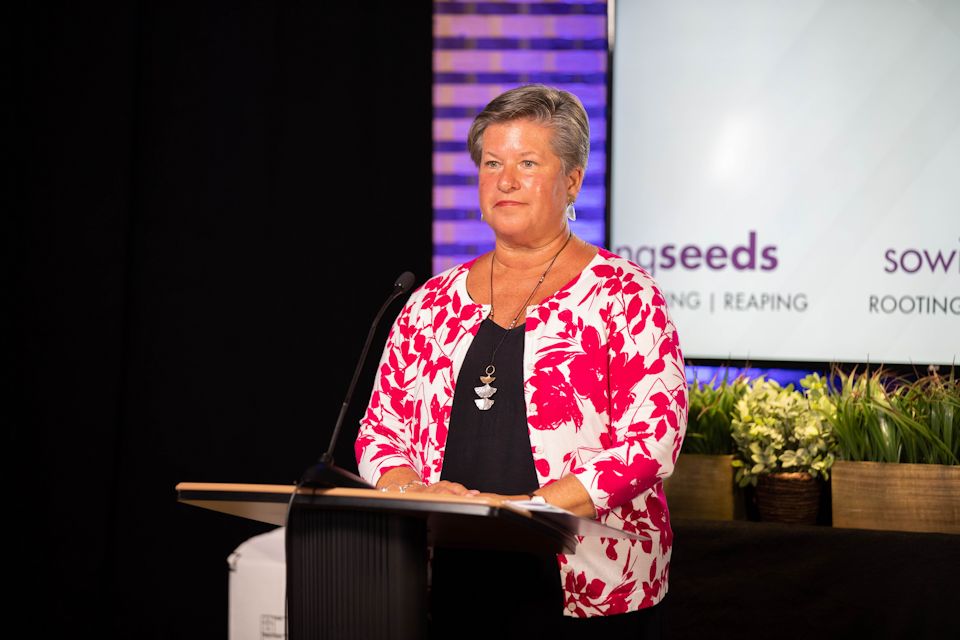 Nichea Ver Veer Guy spends many hours behind the scenes as the chairperson of the Commission on the Annual Conference. She leaves that post this year after shepherding a very unique annual conference hosted online rather than in-person. ~ mic photo/Aaron Word

Every annual conference session celebrates the achievements and the service of people. Here are some of the names and faces of honor at the 2020 Virtual Michigan Annual Conference.

July 27, 2020 | LANSING – The year 2020 has been a tough one for persons marking major milestones, such as graduation. The circumstances for high school and college seniors across the nation are similar for clergy and laity in transition in The Michigan Conference. Celebrating the Journey of Ministry, a significant segment of a typical conference, was not able to be included in the virtual session. There were, however, several recognitions of jobs well done.

The John Buxton Award for Creative Leadership is a tradition of The Detroit Conference that has been continued in The Michigan Conference. On Monday afternoon, the 2019 recipient of the Buxton Award, the Rev. Don Emmert, made the presentation to this year’s honoree. Emmert said, “For any who are not familiar with John Buxton, John was a long-time lay member of the conference, well-known for his work through the Board of Pension and Health Benefits.” Forty years ago, Buxton led others in a major financial effort with lasting impact. “Originating from those decisions a generation ago, in 2019, approximately $4 million in pension and health liabilities were successfully funded without one penny of that amount billed to the local church,” Emmert explained.

He then revealed why the 2020 presentation is special. “This year’s recipient of the John L. Buxton Award for Creative Leadership is Susanne Buxton.” He added, “This year’s recipient knew John personally. They worked together. Not only that, they lived together because they were married.” A member of Royal Oak First UMC, “Sue has demonstrated faithful leadership in a variety of ministry settings over the last many years,” Emmert said. These included: 12 years as head usher of the Detroit Conference; president of the Detroit Conference United Methodist Women, 1997-2000; delegate to the North Central Jurisdictional Conference in 2000, alternate to General Conference that year; conference facilitator since the early 2000s. Sue Buxton retired as facilitator at the end of AC 2020. Jennifer Peters now steps into that critical role.

“Like all our clergy, the district superintendents and I have become adaptive as we worked during this time of coronavirus,” Bishop Bard noted. He then thanked two persons leaving the Appointive Cabinet. “Elizabeth Hill led us with steadiness rooted in her deep faith in Jesus Christ and her profound love for the church,” he said of the cabinet dean and superintendent of the Heritage District, who now enters retirement. “The Rev. Jeff Maxwell stepped up to lead the Central Bay District mid-year. I am profoundly grateful,” Bard said. Maxwell now returns to retirement. After expressing gratitude for their service, Bard announced that the Rev. Dr. Jerry DeVine would be the dean of the cabinet for the coming year. The new superintendent of the Heritage District is the Rev LuAnn Rourke. The Central Bay District Superintendent is the Rev. John Kasper.

Bishop Bard also recognized the service of Nichea Ver Veer Guy, chairperson of the Commission on the Annual Conference. “I first met Nichea when we both served on a planning team for the North Central Jurisdictional pre-General Conference gathering,” Bard recalled. “I saw there her deep faith and commitments, as well as her organizational skill. Nichea, you have been a joy to work with,” he said, thanking her on behalf of the entire Michigan Conference. The Rev. David Eardley moves into the chair of the commission at this time.

As for others, like Sue Buxton, Elizabeth Hill, Jeff Maxwell, and Nichea Ver Veer Guy, there would be no standing ovation or applause ringing through the assembly hall for outgoing lay leaders Anne Soles and John Wharton. Bishop Bard, however, offered them personal thanks and gratitude from the annual conference. “Few of us will ever forget that moment when the Detroit and West Michigan Annual Conferences last met in joint session in 2018, when in closing worship Anne Soles, who had been the West Michigan Conference lay leader, and John Wharton, who had been the Detroit Conference lay leader, took the light from separate candles and together lighted a single candle.”

He spoke to the broader context, filled with challenges. “A new conference was born, born amid denominational strife and social uncertainty, born at a time when religious participation is declining and things which divide seem ascending, born in a state where the middle class was born, and, as with the rest of our society, a state that continues to need to reckon with its history of mistreatment of indigenous persons and its injustice toward persons of color.”

He continued, “To that new conference, Anne and John each brought their own particular light as lay leaders, their own unique gifts to this work.” He praised their shared passion for the laity of the church … Their leadership was critically important as The West Michigan and Detroit conferences came together to form The Michigan Conference for which they have served as lay leaders. They will always have that distinction.” The new lay leader of The Michigan Conference is Annette Erbes, who will be introduced in next week’s edition of mifaith.

One of the most cherished events – historically, spiritually, and personally – of any annual conference session is the Service of Recognition, Commissioning and Ordination. Not only a “mass gathering” of the type not able to be safely held during the pandemic, ordination and commissioning require the bishop laying hands on each individual. That sacred act will take place at the 2021 annual conference. In the meantime, the Clergy Session held on Tuesday, July 28, had the authority to ratify candidates for ordination as “full members” and candidates for commissioning as “provisional members” of the Michigan Conference.

Clergy Assistant to the Bishop John Boley observes, “So, we are in the unique position of having provisional members who are not commissioned and full members who are not ordained.” Nevertheless, these new membership statuses will allow those persons to function in their new membership roles and to receive salary and benefits commensurate with their new status. May next year’s celebration with colleagues, family, and friends be doubly sweet.

Bishop Bard expressed his congratulations to these persons and acknowledged that it was not an easy decision to forego ordination. “We talked about individual services, but that didn’t capture the fullness of the community we celebrate. I look forward to being able to commission, ordain, and recognize these persons next year. We would be standing and applauding for you at this point. Know your clergy colleagues are doing that from wherever they are participating in annual conference.”

He later added, “It is a strange time to be in ministry.” He repeated, “I have deep grief that we are not doing ordination. It is poignant that an act as simple and powerful as laying hands on someone else has become a dangerous thing. We’ve got to be so careful with the virus.” He then sang a verse of The Servant Song “as a prayer for all of us.”

Fifty-two clergy persons were appointed to retirement as of July 1. Typically, these individuals would be recognized during Celebrating the Journey of Ministry. In 2020 retirees were named in a video montage during Clergy Session. After the montage aired, Bishop Bard noted, “This is another moment when we would stand and applaud. Know friends that we are doing that in our hearts.”  A future gathering time for the 2020 retirees hinges on the unfolding pandemic. Like the ordinands, they will be publicly recognized at the 2021 Annual Conference. Click here for a listing of their names.

United Methodists across The Michigan Conference join Bishop David Bard in saying, “One of the things I really miss about not being together in person is such celebrations.” While hugs and handshakes and congratulations could not be offered face-to-face, God’s blessing surely rests on those named in this report.