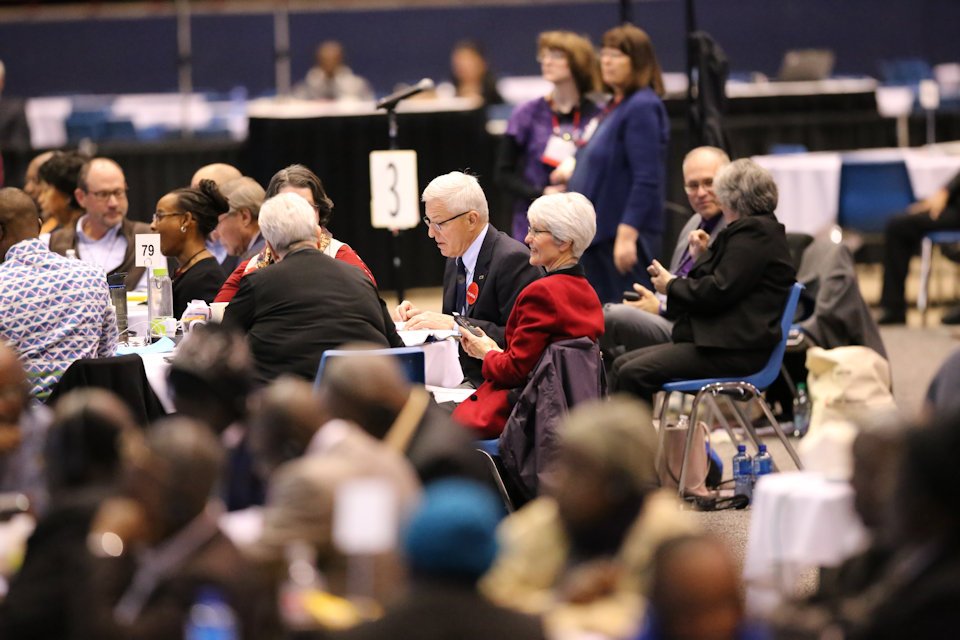 It has been an eventful three weeks since delegates to the 2019 General Conference left St. Louis. Members of the Michigan Delegation shown here in their designated place in the center of the plenary floor. ~ mic photo/Mark Doyal

Three weeks have passed since the delegates returned home from St. Louis. In the meantime, Michigan United Methodists join others across the connection in responding to actions of GC 2019.

In June of 2017, a special teacher was invited to the joint annual conference session of The Michigan Area. To members assembled for the first time at Grand Traverse Resort, the Rev. Susan Beaumont presented sessions on the topic, “Leading in a Liminal Season.” She defined “liminality” as, “a transitory space, betwixt and between.” Beaumont noted that both the denomination and Michigan’s conferences were living between something that was ending and something that has not yet begun.

By March of 2019, the Detroit and West Michigan conferences are in their third official month of life together as a fully united organization. But the season of liminality of which Beaumont spoke continues for The United Methodist Church. The uncertainty that existed between the adjournment of the 2016 General Conference in Portland and the convening of the specially called 2019 General Conference in St. Louis did not resolve; it has only deepened.

The Traditional Plan was adopted by delegates as was a petition regarding a disaffiliation process for churches. The Judicial Council will meet in April to determine how much of what was approved is constitutional. Further, questions around improper voting will soon be investigated by a special task force set up by the Commission on the General Conference. Add to that the need to elect delegates and draft legislation for the upcoming 2020 General Conference in Minneapolis (April 5 deadline for those petitions) at this year’s Annual Conference. “Liminal” indeed.

During the three weeks since delegates returned home from General Conference, much has happened. Churches held prayer vigils and town halls within hours of the closing of the conference. Pastors engaged their congregations in conversations during worship on that first post-GC Sunday, March 2.

Bishop David Bard called Michigan’s Elders, Deacons, and Local Pastors to worship and dialogue at Midland First United Methodist Church on March 9. The bishop said afterwards, “I was under no illusions that sharing in these means of grace would easily heal all hurt or bridge all differences.” Then he added, “Rather, my hope is that all who attended experienced moments of God’s grace.”

On March 16 Bishop Bard attended a gathering, “Where do we go from here?” sponsored by Michigan Conference MFSA (Methodist Federation for Social Action). One hundred sixty persons met at Lansing Central UMC around next steps following GC2019.

Bishop Bard will also be present at Swartz Creek UMC on March 23 as the Michigan Wesleyan Covenant Association meets for reflection, prayer and discussion of General Conference 2019.

Seven major newspapers across the state published The Michigan Statement on Sunday, March 17. This “letter to our LGBTQIA+ siblings and their allies from Michigan United Methodists” was signed by over 2,000 individual clergy and laity. The statement concludes with the words, “We believe that God is not yet finished working within The United Methodist Church. We commit ourselves to creating the inclusive church God intends us to be.”

The Board of Ordained Ministry is the one official body of The Michigan Conference to take formal action since the General Conference adjourned on February 26. In a statement released on March 13, 2019, the BOM said: “In honor of the ministry we share and in lament regarding the decisions of the 2019 Special Session of General Conference of The United Methodist Church, we, the Michigan Conference Board of Ordained Ministry, are compelled to reaffirm how we fulfill our discernment responsibilities since our inception as a Conference board.”

The statement outlines the BOM’s approach to their work with candidates for licensed and ordained ministry and concludes: “As the Michigan Conference Board of Ordained Ministry, our compass has been, and will continue to be, the indicators given by the Holy Spirit of authentic call, of evidenced readiness, and well-demonstrated effectiveness in the work of ministry. We offer this public statement in the certain hope that our siblings in professional ministry will celebrate with us the task we share.” Click here for the full statement of the Board of Ordained Ministry.

The words of Susan Beaumont, spoken in June of 2017, continue to offer meaning for our shared life today. She acknowledged the discomfort and pain of liminal living: “Liminality is a space we hate to occupy but it’s where the biblical God is continually taking us … in order for God to work with us to do remarkable things.” Perhaps her counsel for Michigan United Methodists 22 months ago applies now, as well. “Lead with presence” leaving behind judgment, cynicism, and fear in order to experience, “a fresh breath of creativity that emerges with letting go.”

Bishop Bard will soon announce four opportunities around the state, between now and Annual Conference, for continued conversation. Watch MIconnect for details.