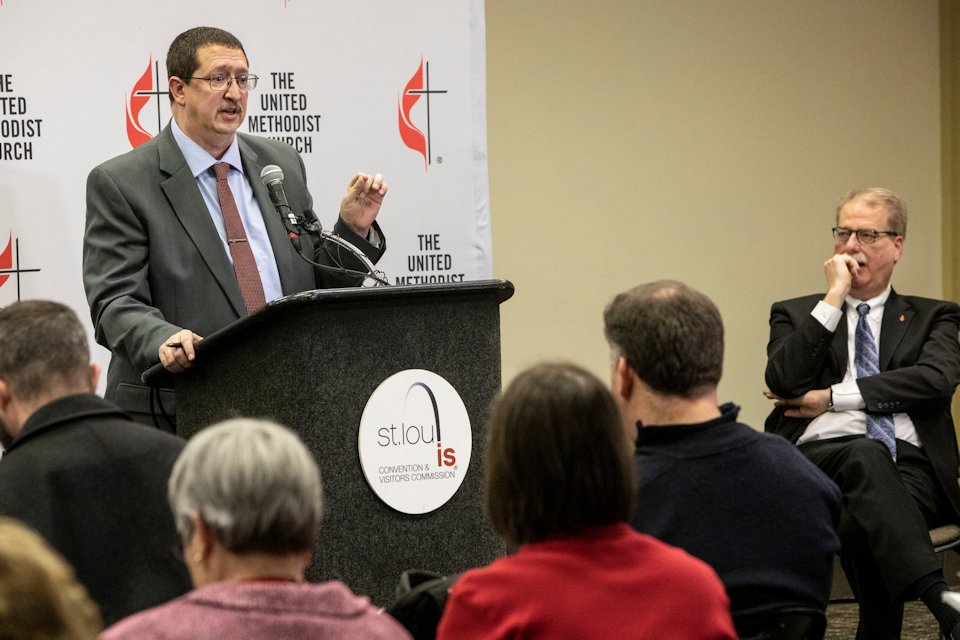 Gary Graves, secretary of the conference speaks to the press following the conclusion of the United Methodist General Conference in St. Louis. To the right is Bishop Kenneth H. Carter. ~ umns photo/Kathleen Barry

The multinational Commission on the General Conference held an emergency meeting by teleconference March 16, after a preliminary review found that “a very limited number” of ineligible people potentially obtained credentials to vote. The commission has not reported a precise number.

The group named 12 of its members to serve on the task force, and authorized staff members Sara Hotchkiss, business manager, and the Rev. Gary Graves, secretary, to negotiate with auditing firms to help with the work.

“The task force of commission members was created to work with the secretary and business manager of the General Conference to address matters related to credentialing, voting and other systemic issues of the 2019 special session,” Kim Simpson, the commission’s secretary, announced at the meeting’s conclusion.

Most of the two-hour meeting took place in closed session to allow members to engage in negotiations, discuss personnel and consult with an accountant. All three activities are listed as exceptions to the denomination’s open-meetings rules. For meeting participants, the teleconference started as early as 6 a.m. and as late as 9 p.m. depending on their location around the globe.

Graves said the task force expects to report its findings to the full commission before the group’s next regularly scheduled meeting in the fall. But the date for that meeting has yet to be set.

The commission held the meeting after Graves revealed March 14 the possibility that people who were correctly denied delegate credentials later were able to procure them.

The revelation of potential voting irregularities follows a highly contentious General Conference in which more than 800 delegates aimed to set the denomination’s direction in its longtime debate over homosexuality.

By 438-384, voters adopted the Traditional Plan, which reinforces the denomination’s bans on same-sex weddings and “self-avowed practicing” gay clergy and adds enforcement measures.

Graves told United Methodist News Service that the number of possible ineligible voters was too slim to affect the final outcome of support for the Traditional Plan or the defeat of the rival One Church Plan. The latter would have left questions of marriage up to individual clergy and churches, and ordination up to annual conferences.

However, voters later decided by a two-vote margin, 402-400, to substitute a minority report for Petition 90066, disaffiliation legislation that would allow churches, within limitations, to leave the denomination while keeping church property.

Because voting is by secret ballot, Graves said, General Conference organizers do not know if the possible ineligible voters supported a particular outcome.

Denials and charges are already flying even before the task force begins its work.

Both bishops and their sons contend that the two men were duly elected reserve delegates. Each of the denomination’s regional units, called annual conferences, elects a certain number of delegates to General Conference. A conference can elect as many reserves as they choose.

Bishop Unda issued a statement on March 17 recounting a conversation with Graves during the February 2018 Council of Bishops’ meeting, in which Graves advised him to organize the election of reserve delegates to the special 2019 General Conference. Unda said reserves were elected during the annual conference meeting in July 2018 and that his son, Germain Unda Mupasa, was elected as a reserve.

Unda Mupasa also said that he voted as a reserve delegate. He is listed on General Conference attendance records as a reserve East Congo delegate, and is listed in the Feb. 25 Daily Christian Advocate as an East Congo reserve delegate, although he was not named in earlier published lists. The Daily Christian Advocate is the official record of General Conference.

Bishop Kasap provided to United Methodist News Service a list of elected delegates and reserves that he said General Conference officials had before the Feb. 23-26 meeting started in St. Louis. His list of delegates elected in 2018 shows his son as the seventh “replacement reserve” delegate. Kasap Kachez is not listed on General Conference delegate attendance records.

The annual conferences list delegates and reserves and the order of election in their conference journals, which are provided to the General Council on Finance and Administration, the denomination’s finance agency. However, the agency does not have the journal of the 2018 South Congo Conference meeting.

When the New York Annual Conference met in special session on March 16, the General Conference 2019 delegation from New York issued a call to the denomination in response to the voting irregularities.

Both the Traditional Plan and disaffiliation legislation face a review in April by the Judicial Council, the denomination’s top court. The requests for constitutional review came before the issue of ineligible voters became public.

The court had earlier identified constitutional problems in both the Traditional Plan and the original version of Petition 90066.

General Conference, the only body that officially speaks for the entire United Methodist Church, typically meets every four years. Its next gathering will be in Minneapolis in 2020.