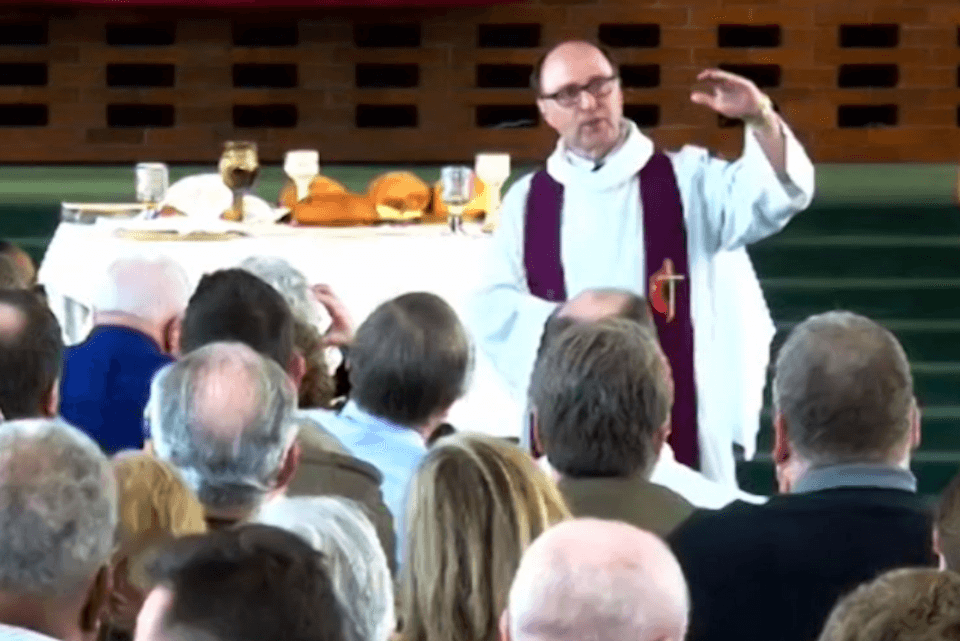 The Listening Session held on March 9th began with, "O, for a Thousand Tongues to Sing." Later in the morning those present voiced their questions and concerns about actions of the 2019 General Conference. ~ photo courtesy Mark Doyal

Clergy from across The Michigan Conference filled the sanctuary of Midland First UMC last Saturday. It was a time of worship, witness and listening.

MIDLAND, MI — Hundreds of clergy from across the state gathered March 9th at Midland First United Methodist Church to share reactions to the recently concluded special session of the General Conference in St Louis, MO. Michigan United Methodist Bishop David A. Bard framed the session around worship which also included time for clergy to share their reactions and questions surrounding the outcome of General Conference.

On February 26, the General Conference acted to affirm portions of the Traditional Plan. The Traditional Plan maintains current language around LGBTQIA inclusion and ordination, and traditional language about marriage and the limitations on clergy officiating at weddings. Enhanced enforcement provisions were also added. The constitutionality of some petitions has yet to be determined by the United Methodist Judicial Council. None of the provisions will take effect until January 1, 2020.

Before the gathering Bishop Bard stated, “I welcome the opportunity to be with our clergy to hear what they are experiencing following General Conference.” He added, “I know they have experienced a variety of reactions, from pleased to pained, from deep disappointment to a deep sense of relief. Some see opportunities lost and some see disaster averted.”

According to Bishop Bard, at this time no churches have indicated they plan to leave The United Methodist Church.

“I was very pleased with the attendance at Saturday’s gathering,” Bard reported. “The conversation expressed hurt, pain, anguish, questions about the future, and anger.” Acknowledging that deep differences remain evident among the elders, deacons and local pastors serving the congregations in the Conference, the bishop noted that, “the tone throughout was calm and respectful.”

After the period of questions and response, the morning ended with communion and anointing with oil. “I was under no illusions that sharing in these means of grace would easily heal all hurt or bridge all differences,” Bard said. “Rather, my hope is that all who attended experienced moments of God’s grace.”

Bard further reflected, “The realities in our congregations are complicated. Not everyone who wanted more space created for LGBTQIA persons in the church are theological liberals. Not every person who holds a traditional view of marriage and human sexuality supported the Traditional Plan approved at General Conference.”

The Bishop acknowledged that some clergy are dealing with church members ready to exit the denomination. “Some LGBTQIA persons and their families are simply done with The United Methodist Church and some are determined to remain. I urge our clergy and congregations to pause and reflect on what has happened, rather than react, which will allow us to all better respond.”

The Michigan Conference has not taken a stance on decisions made at General Conference. About 2,000 Michigan clergy and laity will gather in late May in Traverse City for their annual conference where the Traditional Plan and how to respond is expected to be discussed.