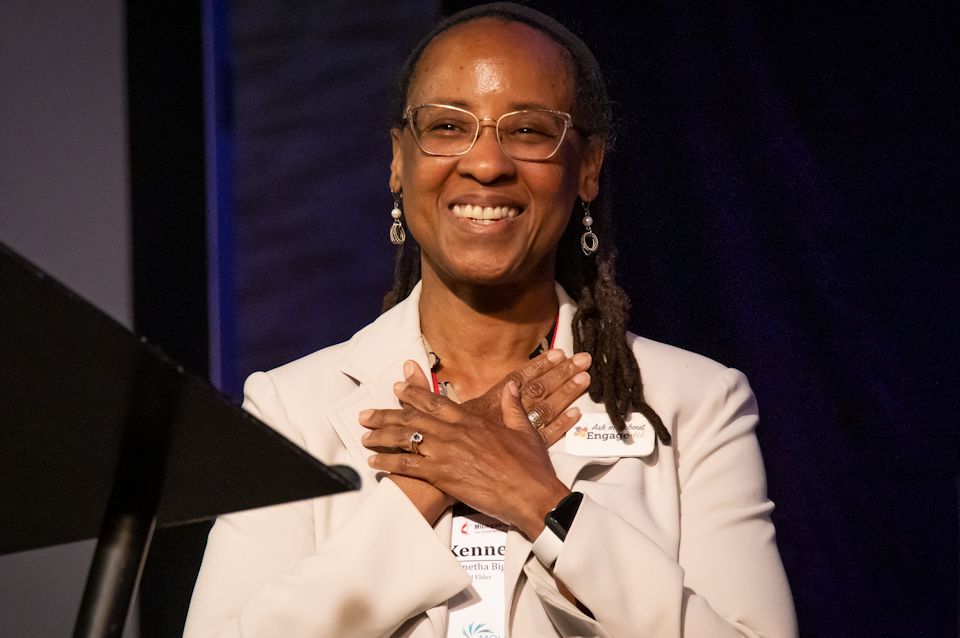 The Rev. Kennetha Bigham-Tsai thanks members of the Michigan Conference for endorsing her as an episcopal candidate on Friday, June 3, 2022. She will be among those considered for election as bishop when the North Central Jurisdictional Conference meets Nov. 2-5, 2022. ~ MIphoto/Jonathan Trites

The Rev. Kennetha Bigham-Tsai was endorsed for episcopal election by the Michigan Annual Conference on  June 3, 2022. The next North Central Jurisdictional Conference will meet on November 2-5, 2022.

June 3, 2022 | ACME, Mich.– Members of the Michigan Annual Conference returned from their lunch break on Friday to an afternoon focused on the conference vision of “Christ-centered, bold, and effective leaders.” Fitting with the theme of the hour, Bishop David Bard announced the endorsement of the Rev. Kennetha Bigham-Tsai as an episcopal candidate in the North Central Jurisdiction. Members had marked their ballots on Thursday as the day’s plenary ended. The vote count reported by the bishop the next day was 766 (83%) in favor of endorsement (154 not in favor).

Bard also reminded members that “Michigan has had quite a record of nominating women to the episcopacy, who were later elected.” He remembered Bishop Marjorie Matthews, a Michigan pastor who in 1980 was the first woman elected bishop of any mainline Christian church. Bishops Sharon Rader, Linda Lee, and Laurie Haller were other episcopal leaders from Michigan. Bishop Judith Craig, the third woman bishop of The United Methodist Church, served the Michigan Area from 1984 to 1992.

Bigham-Tsai’s name was placed in nomination Thursday afternoon by Laura Witkowski, co-chair of the Michigan Conference Delegation to General and Jurisdictional Conference. The delegation had endorsed Bigham-Tsai in January 2020 in anticipation of the NCJ elections scheduled for July of that year. However, the pandemic postponed the usual election cycle three times. When the Judicial Council ruled on May 20, 2022, that episcopal elections could take place later this year, the door opened to an additional endorsement by the Michigan Annual Conference.

In placing her name before the annual conference members, the delegation cited Bigham-Tsai’s experience with the worldwide church, deep faith, vision as a bridge-builder, commitment to full inclusion of LGBTQIA persons in the church’s life, and passion for racial justice as “equipping her to deal with what the denomination is currently facing and beyond.”

Since January 2018, Bigham-Tsai has served as the Chief Connectional Ministries Officer of The United Methodist Church’s Connectional Table. Before that, she served as superintendent of the Lansing District and pastored Kalamazoo: Milwood UMC and East Lansing: University UMC. Bigham-Tsai was elected as a clergy delegate to the 2012 and 2020 General Conferences and co-chairs the current delegation. In addition, she was elected an alternate for 2016.

In acknowledging the endorsement, Bigham-Tsai said, “Thank you so much, Michigan Annual Conference. You have walked with me for years in faithfulness and faith.” She added, “This call has been stirring in me for some time, but it must also stir in the Body of Christ.” She thanked all the clergy and laity who, “each step of the way has taught me to lead, preach, pastor, and how to be a grown up.”

She then asked for prayer for herself, her family, and the delegates preparing to elect bishops in November. She concluded, “[These are times of] trauma, separation, challenge, and excitement. God is doing a new thing in the church yet, still, and always. It’s a process of discernment. I offer myself, and now you offer me to the process.”

Before her nomination, Kennetha Bigham-Tsai presented the Delegation Report and co-chair Laura Witkowski. She introduced the delegation members present, saying, “They have survived the postponement of the General Conference three times. They have made it through a pandemic in socially distanced ways. They have met to discuss legislation that is only a dream.” The delegation received a standing ovation.

Witkowski reported that these delegates, along with 250 others from ten conferences, met through Zoom on November 10-11, 2021. The Michigan Conference hosted this virtual North Central Jurisdictional Conference. She said, “The focus was dismantling racism, the future of episcopal leadership in the NCJ, and the future of The United Methodist Church.”

She stated that the NCJ adopted three important items: the Covenant to Build BeLoved Community, an open letter by UMC leaders titled A Call to Grace, and A Narrative for the Continuing United Methodist Church from the Council of Bishops. (During Saturday legislation, the members of The Michigan Annual Conference affirmed these same items.)

Bigham-Tsai turned to the annual conference theme of resilience, saying, “Our resilience is based in our knowledge of who we are and whose we are. We are children of a God … We are United Methodists, a connectional people grounded in the hope we find in Scripture and energized by a Wesleyan theology of grace.”

The Delegation Report ended with a personal statement of resilience from Witkowski. She shared a memory from her experience in youth group. “I was so grateful to be part of a church where I could ask questions,” she said. “I continue to be grateful that my son is also part of that same church where he can speak up and ask big thoughtful questions about Jesus and God as he grows in his faith, too.”

See a full transcript of the Delegation Report.

Bigham-Tsai was endorsed as The Michigan Conference’s nominee for the open episcopal office in the North Central Jurisdiction. Nominations that are not endorsed by the conference are also accepted. Click here for the links to the application and covenant.