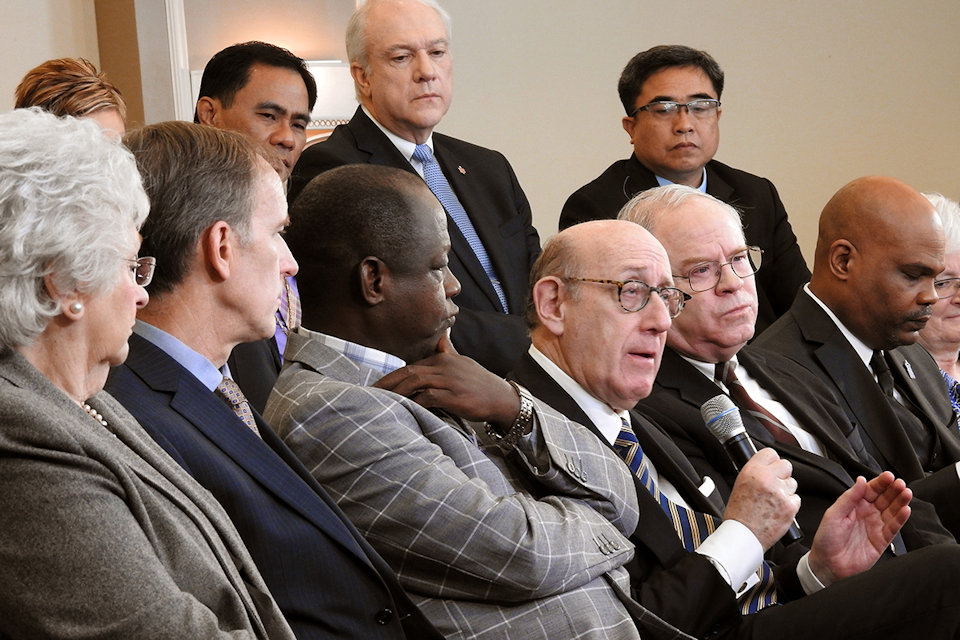 Kenneth Feinberg (holding microphone), speaks during a livestreamed panel discussion in Tampa, Fla., with members of the team that developed a new proposal that would maintain The United Methodist Church but allow traditionalist congregations to separate into a new denomination. Feinberg moderated the work of the team that created the proposal, called the "Protocol of Reconciliation & Grace Through Separation.” ~ um news/Sam Hodges

It was love of The United Methodist Church that brought 16 — sometimes hostile — people to a point of agreement for a path forward for the worldwide church.

Even though the agreement is to split, participants still talked about loving each other in a live-streamed discussion Jan. 13 to explain how the Protocol of Reconciliation & Grace Through Separation was formed.

“We started with quite a bit of tension and, really, hostility in the room,” said Bishop Christian Alsted, Nordic-Baltic Episcopal Area. “But a sense of hope and the possibility of finding common ground emerged. This was a rollercoaster ride … sometimes we wanted to get off but all stayed.”

Front and center of the group was famed mediator Kenneth Feinberg, who helped the United Methodists representing strongly held, diverse viewpoints, get to a yes.

Feinberg said the question he posed to the group was, “What is the alternative to decades of strife, tensions, and stress?”

Jan Lawrence, representing progressives, said the team was blessed to have Feinberg.

“To be successful, we felt like we needed something different,” she said. “Our answer to that was having a professional mediator join us.”

Feinberg, who donated his services to the denomination, said he knew from the first day that he had the right group of people in the room. He also said he also had two secret weapons: Rick Godfrey and Wendy Bloom of Kirkland and Ellis, a Washington and Chicago law firm. 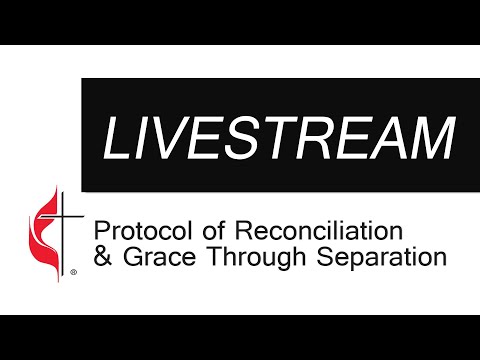 Tanton said one of the most asked questions since the announcement of the protocol is, “Why is it the traditionalists are the ones to leave?”

The Rev. Keith Boyette, representing traditionalists, said, “By agreeing to leave, the traditionalists have chosen to set the church free from this conflict.”

At the end of the 2019 special General Conference, the traditional side won the vote, but the conflict did not end, he explained.

Progressives and centrists made it clear that they would continue to resist and were not willing to leave the denomination.

People also are wondering about who was and was not included in the mediation team.

Feinberg said that with too many people, mediation won’t work.

“Despite the parameters of the size of the group, we still had a pretty diverse group of people representing a broad theological perspective,” said the Rev. Junius Dotson, representing centrists. There were also conversations with others outside of the 16 in the mediation room, he added.

The group had to agree on restructuring proposals, governing proposals, and finances. The work unfolded over six two-day sessions.

As part of the process, the group brought in church financial experts to arrive at the decision of $25 million for traditionalists to start a new denomination, $39 million for ethnic caucus and Africa University and $2 million for seed money for any other denominations that might plan to start.

If the protocol is adopted, the process for deciding where someone would affiliate is similar for clergy, annual conferences, and local churches explained Bishop Thomas Bickerton.

“We will help each person in the determinations they need to make in this very tender and vulnerable time for the church,” he said.

A team from this group is now working on legislation that has to be constitutional and translated into the official languages of the church, said the Rev. Tom Berlin, centrist.

Ultimately, it is the delegates who will decide on whether the protocol is accepted.

“If this or a similar plan does not pass, it will be catastrophic,” said Bishop John Yambasu, Sierra Leone. Yambasu called the first meeting of traditionalists, centrists, and progressives together after the 2019 General Conference.

He left the 2019 conference filled with concern, he said.

“Going back home, I heard a voice say to me, ‘John, you’ve got to do something.’”

Berlin said all the meetings began in prayer and in moments of tension, they sought the guidance of the Holy Spirit.

“Those prayer moments were opportunities by the entire team to recognize human limits,” Yambasu said.

Click here to read the initial responses of Michigan leaders to the proposed plan.