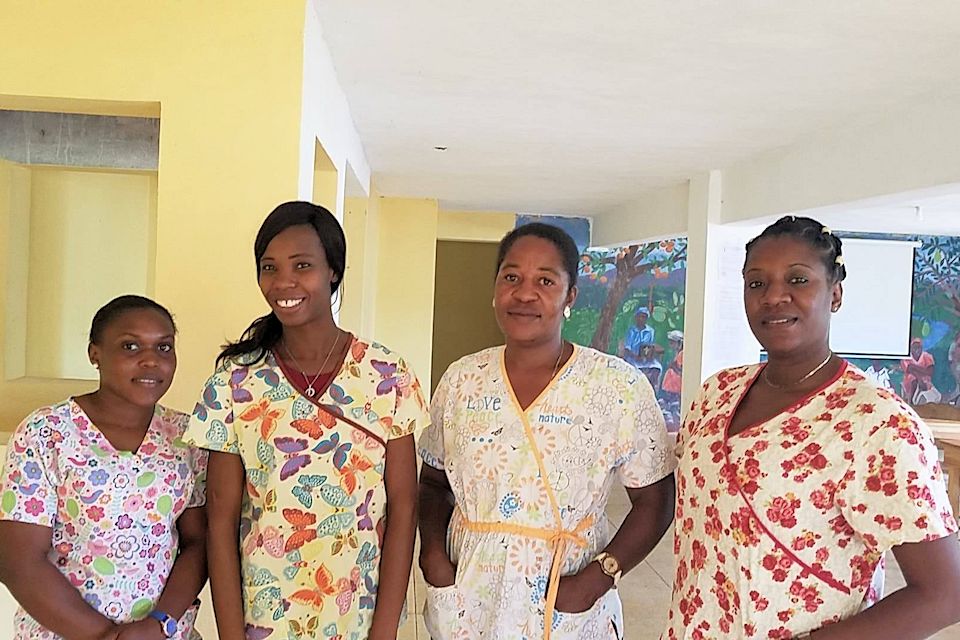 The Haiti Covenant Partners of the Michigan Conference are concerned about the country’s vulnerability to COVID-19. Chronic poverty, hunger, and cultural practices are challenges to the prevention of the disease.

It’s been ten days since Michigan residents heard Governor Gretchen Whitmer announce an executive order to stay home and stay safe. In the state and around the nation today, persons are experiencing degrees of irritation over this interruption in their regular routine and long-held expectations. Many feel a mixture of emotions, ranging through resignation, impatience, grief, and fear.

But consider what the COVID-19 experience is like in a place where the regular routine is already bleak and brutal. The Rev. Karl Zeigler, Chair of the Michigan Conference Haiti Covenant Partners, says, “Consider sheltering-in-place. In Haiti, that’s nearly impossible to implement. Just imagine living in a small home with six to ten people – often three generations – trying to live in a healthy environment.” Zeigler adds, “Having safe drinking water and dealing with human waste was of critical concern every day before the current health crisis.”

Zeigler was in touch with others in ministry in Haiti on March 31 and shared the following report. Few COVID-19 tests are available in Haiti, and only 15 cases have been identified. But preventative steps are being taken. The Haitian government has called for social distancing and suspending all public meetings of more than ten people. This means schools, churches, banks, and many businesses are either closed or open limited hours.

“The Boy Scouts have set up hand-washing stations all over the country, and all American-style grocery stores have hand-wash stations at the doors,” Zeigler says. It is unclear how long supplies will last, but “most store employees are wearing surgical masks as an added precaution.”

While food is accessible in the capital, Port Au Prince, rural areas are suffering from critical shortages, especially fresh fruit and vegetables. “The U.N. has indicated the possibility of severe food insecurity is at an all-time high,” Zeigler says.

On April 2, 2020, Bishop Jean Lesly Dorcely, General Superintendent of the Haiti District, reported. “The Coronavirus is affecting Eglise Methodiste. The first impact is that churches are shut down, and this means that normal contact between ministers and their congregations have been cut off.” As in the U.S., pastors need to adapt. The bishop adds that “some ministers are conducting worship electronically using Facebook. This has limited success because many people do not have internet service and cannot participate. The fear of the unknown is very serious, and ministers cannot be reassuring to their flock.”

Haiti’s land border with the Dominican Republic, its neighbor east on the island, is closed. All flights in or out of Haiti have been canceled, and ports are closed. The last charter flight to repatriate American citizens left Monday, March 30. The current estimate is that flights will not resume for 2-3 months. Zeigler adds, “It is unknown how long port closure will last due to the large number of food imports that are needed.”

There’s good news, as well. Terrie Eisenmann, a member of the Michigan-Haiti Covenant Partners, applied for funding from United Methodist Women of Detroit: Metropolitan Church for supplies and training in the use of Sawyer Water Filters. This request was made before the pandemic occurred. While Eisenmann and the team from Edmore: Faith UMC are unable to travel to Jeremie, Haiti, to do this training, the funds did arrive in February.

In Zeigler’s words, that meant “Buckets in the right place at the right time.” Five-gallon buckets were purchased and transported to Jeremie. “With the threat of COVID-19, the need for handwashing stations was critical,” Zeigler explains. “While the buckets were supposed to be used for filters, they were re-purposed with the purchase of water spigots and a case of soap.”

Valerie Mossman-Celestin, U.S. Executive Director of Haitian Assets for Peace International (HAPI), was able to Skype with HAPI staff on March 31. “They report that their largest challenge is staying home because they live day-to-day.” HAPI makes its home in Mizak, a mountain village that’s a three-hour drive from Port Au Prince. “No one with symptoms of coronavirus has reported to the clinic,” Celestin observes. “The majority of cases in the country are those returned from international travel. So, people are watching to see if there is a local community spread of the disease.” HAPI is recognized as a primary ministry of Michigan Conference Haiti Covenant Partners.

Reports from Mizak confirm that food is the first need now. Mario Damis, IT Director and Coordinator of HAPItech, says, “If you tell a Haitian to stay home for one week, they will already die because they have no food. They prepare food for each day or the next.” As for some children in the U.S., “No school, so no one has food at school. Our number one need is food because then more people can stay home,” Damis adds.

At present HAPItech classes are suspended to discourage contagion. Damis is considering setting up small groups of less than ten persons each so that students can complete the exams that were due the week government restrictions were put in place.

Measures to prevent the spread of the virus run counter to traditional agricultural practices. Mossman-Celestin explains. “Late April, early May is the primary planting season in Haiti, and even that is a ‘team sport,’ done in solidarity. A group of farmers get together, called a ‘konbit’, and form a line across the field with their picks to break the ground, and they move forward in unison, shoulder to shoulder, preparing the ground for seed. They continue until everyone’s field is ready.” That technique does not lend itself to physical distancing; a grim choice between infection or famine.

She also adds that an economic crisis, “the worst I have seen since my first trip to Haiti in 1998,” was raging before the pandemic struck, characterized by galloping inflation, devalued currency, and food shortages. “At least 90% of the population is not rushing out with their debit card to stock up and hunker down,” Mossman-Celestin says. “There is a small middle-class population in Port Au Prince, but that’s rare in rural Haiti, where most work in the informal economy and sell a product daily and buy their ‘daily bread.’”

Scarcity works against the hygiene practices required to slow the spread of COVID-19. Water in rural areas is carried long distances by foot or on donkeys. Residents in cities often rely on rain catch barrels on rooftops delivering water by gravity through pipes. “Water is used sparingly for bathing, washing, and cooking,” Mossman-Celestin recalls. “A shower ration may be two soup cans.” Further, handwashing is often done in pairs “with persons pouring small amounts of water over another’s hands.”

Social and cultural customs in Haiti are also raising the risk factors and making prevention of the virus more difficult. Mossman-Celestin describes the living arrangements in a typical Haitian home. “Many Haitians share their bedrooms and beds with multiple persons,” she remarks. “I had a Haitian co-worker, in her 20s, who rented a room in the same apartment with me. It was her first time sleeping alone, and she suffered nightmares and HIGH anxiety—as did others I knew.”

Mossman-Celestin reflects that there are those in the U.S., who like their personal space, but who still experience stress over physical distancing. “I can’t help but speculate on the mental health aspects of social distancing in a culture, like Haiti’s, whose survival has been built upon solidarity that includes physical closeness,” she says.

Further, according to Damis, physical distancing presents a transportation challenge for Haitians. “Everyone still depends on public transportation, but now the drivers are limited to ten people, which doesn’t cover their expenses. They cannot continue long like that.” Tap-taps, converted Toyota pick-ups with benches in the back bed, commonly drive at full capacity, including men hanging from the outside of the vehicle. Motorcycles seen on Haitian roads frequently carry four passengers.

Dr. Lolo, the Medical Administrator for HAPI, reports that to date, no Mizak residents show signs of infection. Anyone with symptoms will be sent to St. Michel Hospital in nearby Jacmel, the third-largest city in Haiti. The population of Haiti is 11.3 million. The estimated number of ICU beds is 30.

The Felisane Health Center remains open in Mizak for prenatal exams and deliveries. Start Right educational meetings are suspended temporarily. The artisans in the village are making soap and sharing it with those who visit the clinic.

One of HAPI’s employees recently suffered a miscarriage due to malarial fever. While malaria medications are free in Haiti and usually readily attainable, Chloroquine has disappeared from pharmacy shelves during the COVID-19 health crisis. “Whether or not Haiti gets hard hit with COVID-19, the rainy season is approaching and with it comes malaria. We need Chloroquine,” Mossman-Celestin asserts. “Global hoarding of Chloroquine will be a killer in places like Haiti.”

Mossman-Celestin states, “Most of us are at least a little anxious in the U.S. These are challenging times, even deadly. But this country has great resources and the ability to act to procure care for our citizens.” She offers the reminder that Haiti looks to the international community for assistance, even as the international community is overwhelmed with their own health needs and economic crisis.

Bishop Dorcely says, “These are very difficult times for us all, and we need your continued support. Please pray for the people of Haiti and Eglise Methodiste d’Haiti as we pray for you and your countries.”