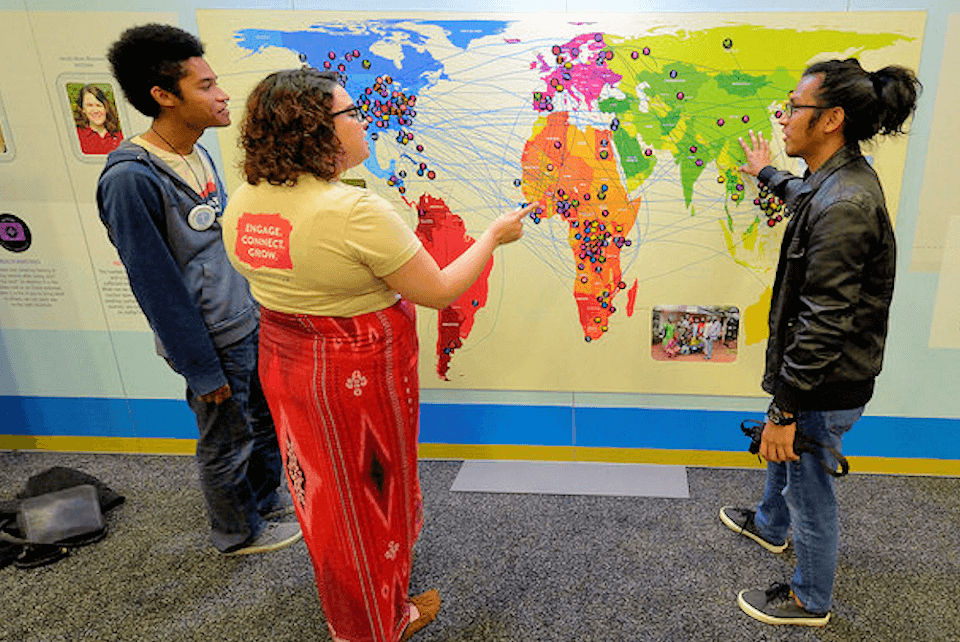 A map on display at the 2016 General Conference illustrates the "From Everywhere To Everywhere" nature of United Methodists in mission around the globe. ~ umns photo

Bishop Laurie Haller takes a personal look at an awesome global enterprise … the mission of The United Methodist Church.

My first real mission experience was in the summer of 1972 when Mennonite Disaster Service asked for volunteers to help with flood relief in Wilkesbarre, PA after Hurricane Agnes. It was one of the deadliest and most costly storms in US history. I was a teenager and spent several days cleaning mud out of flooded homes. My most vivid memories were the awful smell and the deep gratitude of residents who had lost virtually everything.

Twenty-five years later, the church in Michigan that Gary and I were serving established a partnership with a Methodist Church in Cuba. My two school-age daughters and I were part of the first mission team that stayed with the pastor of the Herradura Methodist Church for a week. We worshipped, ate, served, and prayed with Methodist Christians who had very little materially but had a depth of spirituality, hope, and joy that was humbling. We distributed clothing and other necessities to our new friends, and we also visited a number of missions/house churches that lay leaders of the church had started.

As I preached in the church on Sunday morning, armed policemen were standing in the back of the sanctuary. I remembered the words of the Swiss theologian Emil Brunner, who wrote in 1931, “The church exists by mission, just as a fire exists by burning. Where there is no mission there is no church; and where there is neither church nor mission, there is no faith.” I wondered, “The faith of the Herradura Christians is so deep. Who was ministering to whom?” I have kept this hand drawn picture by a little girl in Cuba in my Bible for the past twenty years.

Last week I was able to put words to my sense that mission is always a two-way street where the givers and recipients are not always self-evident. I had a chance to visit the General Board of Global Ministries (GBGM) headquarters in Atlanta as part of the Ministry Study Commission and learned that The United Methodist Church is in mission from everywhere to everywhere. General Secretary Thomas Kemper reminded us of the building blocks of mission in The United Methodist Church.

Purpose:Connecting the Church in Mission

Vision:The General Board of Global Ministries equips and transforms people and places for God’s mission around the world.

Recently, two Global Mission Fellows from Zimbabwe and Malawi and a missionary from the US were detained and held by authorities in the Philippines, where they were serving and sharing God’s love to the world. 18,000 signatures from 110 countries were presented to release these young United Methodists, who were held in a country where The UMC is strong. Because of the persistent efforts of GBGB, an appeal from the Council of Bishops, and countless prayers, all three young adults were released.

Approximately 60% of the annual budget of Global Ministries is funded through apportionments. The rest comes from ordinary United Methodists like you, who go from everywhere to everywhere when your church supports a missionary or a mission project. You make a difference every time your church pays its world service apportionments, and you change the world whenever you make a contribution to UMCOR or go on a mission trip.

From everywhere to everywhere. From Wilkesbarre to Cuba, to the Philippines, the church exists by mission. Where is your place in God’s work around our world?

~ reprinted with permission from Bishop Laurie Haller’s blog, “Leading from the Heart,” September 10, 2018.