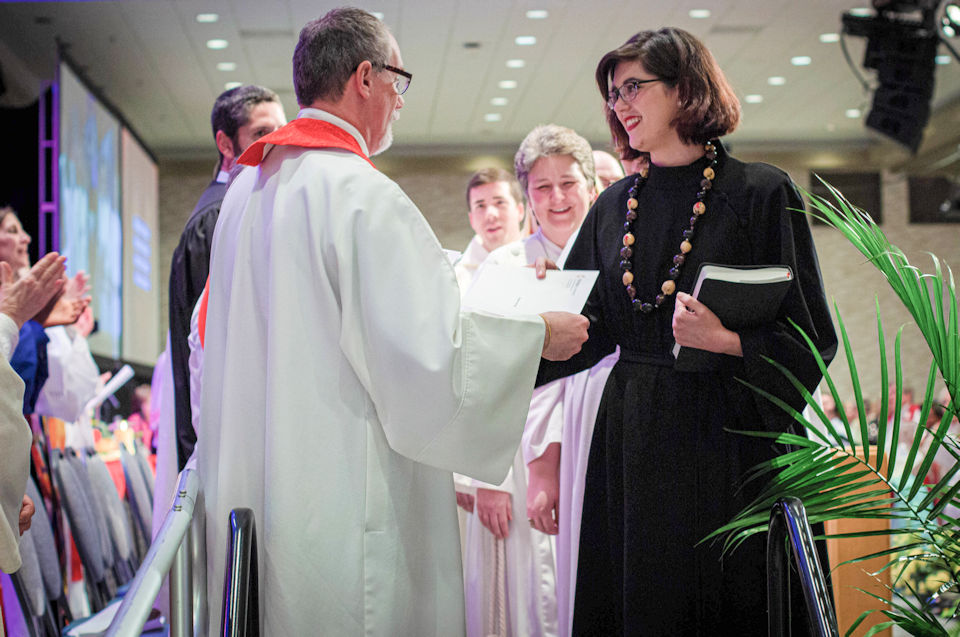 Elizabeth Hurd is greeted by the Rev. Barry Petrucci, Order of Elders Chair, during the the Service of Ordination and Commissioning on June 2, 2019. Leslee Fritz and Alex Plum follow her off the stage.~ mic photo/Jonathan Trites

This is the first article in a new series, “For a time such as this.” The theme is based on Rev. Jennie Browne’s sermon at the 2019 Michigan Annual Conference.

The Chapel of the Holy Trinity in Staunton Harold is typical of many small, ancient chapels in England, but it has a unique distinction. It was built during the civil war which pitted the Protestants against the Catholics with dreadful consequences. Building a chapel in such tumultuous times was an act of defiant faith. A plaque over the entrance reads: “In the year 1653 when all things sacred were throughout ye nation either demolished or profaned, Sir Robert Shirley, Baronet, founded this church; Whose singular praise it is to have done the best of things in the worst of times, and hoped for them in the most calamitous.”

Obviously, the conflicts tearing at the fabric of the United Methodist Church today do not hold a candle to those destructive years in England. But in the face of the pitched debates and potential schism in the denomination, there are still young adults who chose to enter the ministry of this divided church. In a day when it would be fair to ask why you would want to move toward ordination at this time, these persons have sensed God’s call and will not be dissuaded. They hold the future of the church in their hands, and they face the future with hope.

This series of articles will share the journey of some of the provisional elders and deacons who were commissioned at this year’s Michigan Annual Conference. They are the men and women who choose to “do the best of things in the worst of times.”

Alex grew up in Swartz Creek United Methodist Church. He credits his youth pastor Rev. LuAnn Rourke and the Disciple Bible Study Program for “…laying the foundation for my personal Christian discipleship.” The Rev. Terry Gladstone, an ordained Deacon and member of the Detroit Conference staff at the time, invited Alex to become a summer Mission Intern. Alex worked with the Rev. Faith Fowler at Cass Community Social Services. Fowler and the unique ministry of Cass in the urban setting enabled him to experience alternatives for ministry beyond the local church. Alex says that serving as a Mission Intern and participating in the Young Leaders Initiative, “…helped me see, feel and do ministry in ways that felt authentic to my desire and aptitude to do public health work and connect the church with the world.” Today, he is doing just that. Alex Plum is employed by the Henry Ford Global Health Initiative at Henry Ford Hospital coupled with his local church appointment at Cass Community United Methodist Church. After the probationary period, he will be ordained as a Deacon, literally connecting the church and the world in the area of public health.

Elizabeth, recently appointed as the pastor of the Caledonia United Methodist Church, was pursuing a degree in teaching at Saginaw Valley and spending her summers as a counselor at Lake Louise Middle School Camp. For five years, she worked with children and youth as a Mission Intern. During that time, Elizabeth says, “I felt a deep calling to walking with people on their faith journey, connecting them to God and helping them recognize God’s love and grace in their lives.” Terry Gladstone was the first to encourage Elizabeth to move toward ordained ministry. Then her youth leader, the Rev. Alecia Williams, also an ordained Deacon, mentored her and gave her space to grow in her sense of call and the use of her gifts.

When asked about their “hopes and apprehensions for the church,” Alex and Elizabeth both said those hopes and apprehensions were linked. Alex said, “My hope is the same as my apprehension—that I will be able to do this authentically and that being ‘set apart’ will be fulfilling and not alienating. Authenticity is my greatest hope, wanting folks to be able to see God in my words, my actions, and my love.” He said he finds hope in young people who spend their summers working with families in poverty, in campers who experience the Creator in creation, and in the everyday stories of health and healing happening both in the place where he works and the city of Detroit.

Elizabeth said, “My hopes and apprehensions for becoming an Elder are tied together. I have a lot of hopes and apprehensions about what the United Methodist Church is going to look like in the future.” She believes the church is at what she calls “…a changing point. I believe God is luring us toward something new, and that is both exciting and terrifying.” She finds hope in the conviction that this is not our church, but God’s church and that God is not done working with us yet.

Sir Robert Shirley, Baronet, would agree, and John Wesley would be proud of these rising leaders who hold out hope for the future. They are ready to commit their lives to the ordained ministry of the church. They are ready “to do the best of things in the worst of times and hope for them in the calamitous.” Elizabeth and Alex are prepared to lead us into a hopeful future in the name of Jesus Christ.