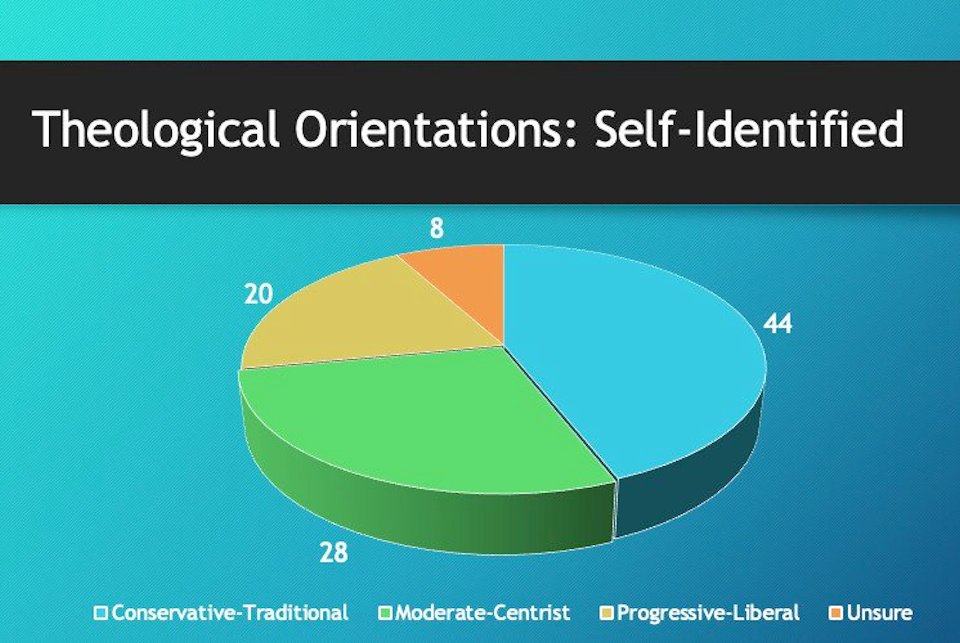 A recent survey dug into theology-related views of United Methodist laypersons in the United States. Results were strikingly varied.

The United Methodist Church is a big tent theologically, and people with conservative or traditional religious beliefs make up the largest group under that spreading canvas.

Of those contacted, 44 percent identified themselves as conservative/traditional in religious beliefs, 28 percent as moderate/centrist and 20 percent as progressive/liberal.

“Oftentimes we think the denomination is equally divided. It was important for us to see that the plurality of people see themselves as more conservative,” said Chuck Niedringhaus, who oversees research for UMCom.

The survey dug into United Methodists’ views on various theology-related subjects, including the Bible, Jesus, salvation, the Resurrection and the afterlife.

Beliefs and priorities held by the self-identifying groups proved, in some cases, strikingly varied.

“There are significant differences in how we’re approaching being United Methodists,” Niedringhaus said.

For example, the survey asked whether the primary focus of The United Methodist Church should be saving souls for Jesus Christ or advocating for social justice to transform the world.

“Essentially, they’re focused on different ends of the mission statement,” Niedringhaus said, referring to the denomination’s official goal to “make disciples of Jesus Christ for the transformation of the world.”

The United Methodist Church’s struggle for unity is hardly new, and its longstanding, split-threatening conflict over homosexuality is to be addressed at a special session of General Conference, occurring Feb. 23-26, in St. Louis.

The communications agency did a 2015 survey on United Methodists’ views on same-sex marriage, after a U.S. Supreme Court decision legalized such unions across the country.

The new survey did not ask about homosexuality or any other social issues, but instead sought to find out whether basic theological differences might be driving divisions within the denomination, Niedringhaus said.

UMCom contracted with the firm Research NOW, which obtained online questionnaire responses from 541 U.S. residents last fall. (Logistical and informational challenges made it impossible to extend the survey to church members in Africa, Europe and the Philippines, Niedringhaus said.)

All the respondents were laity who either belong to a United Methodist church or attend one regularly, but who do not serve as local church leaders.

The survey was balanced geographically, so that areas where United Methodist membership is strong, such as the Southeast, had more respondents than where that isn’t the case, such as the West.

On some matters there was broad agreement. For example, large majorities of all three self-identifying groups believe in Jesus’ birth from a virgin, his crucifixion in order to reconcile humans to God and his resurrection in bodily form.

By big margins, conservatives, moderates and liberals understand God as creator of heaven and earth and believe God’s grace is available to all.

But only 50 percent of liberals believe in a literal hell, compared to 82 percent of conservatives and 70 percent of moderates.

One question asked respondents to choose the most authoritative source of their personal theology.

An overwhelming majority of conservatives, 86 percent, said a relationship with Jesus is the only way to salvation. Sixty-four percent of moderates agreed with that, and 54 percent of liberals did.

The self-described moderates generally ended between conservatives and liberals in the results for specific questions. But often they were closer to the conservative position.

“I don’t think you can add the moderates and progressives and say that’s where the church is,” Niedringhaus said. “Theologically, many (moderates) are more traditional.”

The survey showed that women are more likely than men to hold liberal/progressive views and that church attendance is strongest by conservatives.

The average age of conservative respondents was 55, and that of moderates and liberals was 48.

Niedringhaus said there will be briefings on the survey for church agency leaders after the special General Conference.

“There’s a big theological gap,” he said. “At the very least, boards and agencies should be looking at this data.”