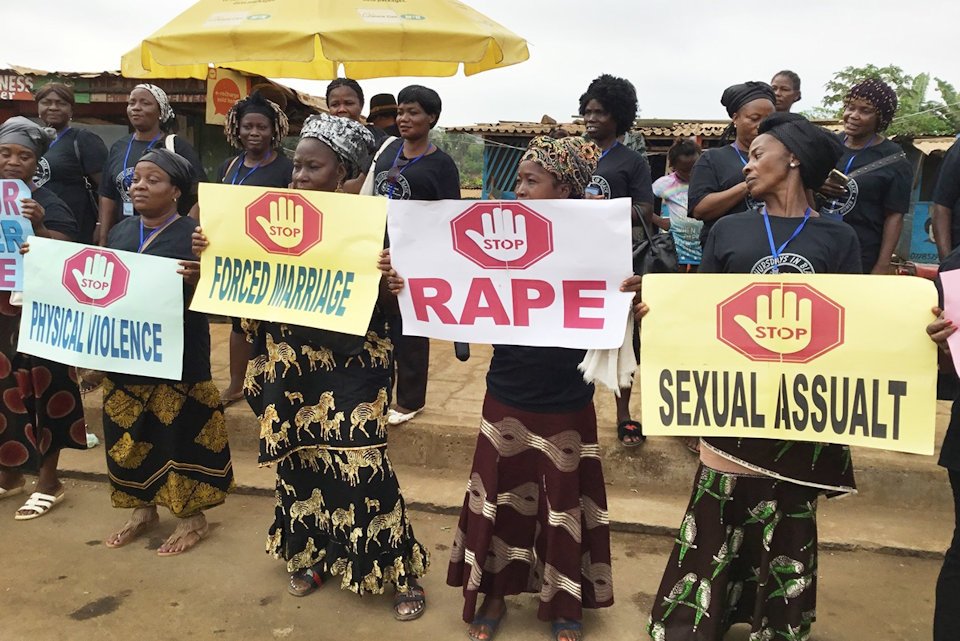 United Methodist Women in Liberia staged a peaceful demonstration in the streets of Margibi County against the growing waves of violence against women and girls.

“The issue of violence against women is not unique to The United Methodist Church. This is an age-old global problem, so we must tackle it as a societal problem,” she said.

The day of the march, January 24, 2019 was declared “Black Thursday,” and every woman attending the 72nd annual session of United Methodist Women in Liberia wore black.

Nelson pointed out that what affects one woman affects all women and it is the vision of United Methodist Women to turn faith, hope and love into action for women, children and youth.

As part of its five-year strategic plan, Nelson said, the group intends to help women and girls who have been affected by violence.

“We will help victims of violence by providing safe homes, psychosocial counseling, legal services, medical services, livelihood skills, scholarships to pursue education, advocacy and awareness that will seek to end these vices against women and girls,” she said.

Pastor Rose R. Farhat said the group’s advocacy is for all women.

“We are the voice for the voiceless, and in our advocacy, we will include all women as we strive to make disciples for Jesus Christ and offer life in all its abundance to the Liberian people.”

“Through these partnerships, our support is primarily for scholarships and training activities that will empower women of the church and state,” Farhat said.

She encouraged women of The United Methodist Church in Liberia not to shield family members who are abusing their daughters through rape or other forms of abuse.

“Stop hiding the wrongs that are done to our young girls in the name of protecting your marriages,” she warned.

As the Connectional Table director of the church in Liberia, the Rev. George Wilson said the church needs to support women in their advocacy but also expand it to include young boys who also are affected by rape and other forms of sexual abuse.

“We support the advocacy of the women as a church, but it should not be limited to only women, because there are young boys who are abused sexually right in this city,” he said.

He wants the women to work with the church human rights office in order to expand their services to all affected people.

This year’s UMW annual gathering, held Jan. 21-27, included presentations from various speakers who drilled the women on their human rights in the church and state. The gathering brought together more than 200 women from all over Liberia.

Retired Judge Gladys Johnson challenged the women to speak out against the evils in society, starting with the church.

“Tell your leaders what they are doing wrong while they are ministering the words of God in the church and the communities,” she said, adding that women always have been at the helm of addressing societal ills in the country.

She called on women throughout Liberia, including United Methodist Women, not to ignore the growing wave of wrongs in the Liberian society, even if they are among those benefiting.

“Start with your husband or child if you earnestly think that what they are bringing home is more than what they actually work for or earned,” she said.

Johnson encouraged United Methodist Women to lead a simple demonstration against rape, which has become prevalent in rural communities in Liberia.

“Your inaction will mean a support for the perpetrators of this terrible evil against women, especially young girls,” she said.

“As a former member of the Supreme Court bench, I know what it means to speak against the wrong actions of church and government leaders, but that is what you are called to do as a church.”