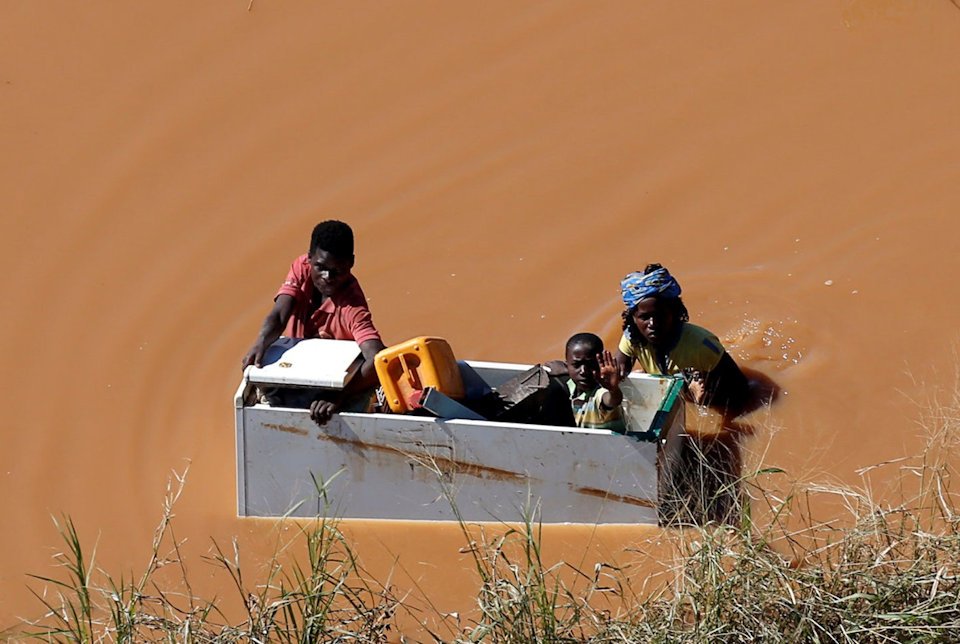 A child is transported inside an empty refrigerator during floods after Cyclone Idai, in Buzi, outside Beira, Mozambique. The United Methodist Committee on Relief has allocated three $10,000 grants for immediate, emergency short-term funding to meet basic human needs of those affected in Mozambique, Zimbabwe and Malawi. ~ umns/Siphiwe Sibeko, REUTERS

United Methodists gathered at an ecumenical service to support cyclone survivors as relief efforts ramped up in the hardest-hit areas of Mozambique.

Under the leadership of the Rev. Arlindo Muduma Francisco, director of ecumenical affairs for the council, people gathered to pray and donate money and goods to assist their brothers and sisters affected by the heavy storms in the central region of Mozambique, mainly in the cities of Beira, Chimoio, Tete and the surrounding villages.

The death toll from Cyclone Idai, which made landfall in Beira on March 14, rose to 750 people across Southern Africa, with more than 446 reported dead in Mozambique, according to Celso Correia, the country’s Minister of Land and Environment.

The Rev. Eurico Gustavo, a United Methodist communicator based in Beira, said recovery efforts are beginning in the hard-hit city.

One of the main roads that connects Beira with the rest of the country has been temporarily rebuilt to make transporting people and goods easier.

“Material things are destroyed and we lost even our dear ones, but we thank God because we are alive and we’ll carry on,” Gustavo said by phone.

Mozambique Area Bishop Joaquina Filipe Nhanala, who was in the North Conference and unable to attend the solidarity service, issued a statement on the disaster and relief efforts.

How to help … give to UMCOR’s International Disaster Response #982450.

“I thank all people of goodwill within and outside the country who hold Mozambique in their prayers and thoughts. I know there are many, also, who have contacted me inquiring on what kind of support they could provide to assist those affected. I have informed them that we, basically, need everything from shelter, food, clothes, school and hospital buildings and their supplies. We need to rebuild or build new parsonages and chapels. Many things have been destroyed,” she said.

“I lament that we lost many fellow Mozambicans. …  I hold all Mozambican people and especially those directly affected in my prayers of consolation.”

The bishop also expressed gratitude for the support of churches and the United Methodist Committee on Relief, which issued a $10,000 grant last week for emergency short-term funding to meet basic human needs in Mozambique. UMCOR also allocated $10,000 grants for Zimbabwe and Malawi, which were affected by the storms.

Respeito Chirrinze, UMCOR’s disaster management coordinator in Mozambique, has visited Beira and is coordinating with other non-governmental organizations on follow-up response, according to Laurie W. Felder, UMCOR’s director of international disaster response.

She said Chirrinze also is working to distribute the grant money, noting that the biggest needs he is seeing right now are for aquatabs to purify water, mosquito nets and temporary shelters for those who have been displaced.

During opening remarks at the solidarity service in Maputo, the Rev. Felicidade Chirinda thanked those who have responded with prayers and donations.

“As a body of Christ, we understand that when one member suffers, we all suffer. I encourage you to always remember those who are suffering in your prayers and generosity,” she said.

Chirinda is the chair of the ecumenical body and the first clergywoman to hold the council’s highest position since it was created in 1948.

“We have come here to worship God and at the same time to pray and seek guidance on what, as a church, we can do to help our brothers and sisters,” she said.

All donations made at the service — money, clothes, shoes, school supplies and food — were handed over to officials with the National Institute for Disaster Management. Fatima Fernanda, the group’s delegate in Maputo, gave a brief update to the congregants.

“As of today, 344,811 people are directly affected” by the disaster in Mozambique, she said, noting that additional rain worsened the damage caused by the storms and cyclone. She said 2,867 classrooms have been destroyed, with more than 86,000 students affected.

The Rev. Joao Damiao Elias Muhale, a United Methodist and secretary general of the Mozambique Christian Council, said the group not only preaches the Gospel through words, but also through deeds.

“This solidarity service campaign is part of our call and duty as a Christian institution who are compelled to follow Jesus’ teaching of love, care for the neighbor and the least of these, especially those in danger and in need.”