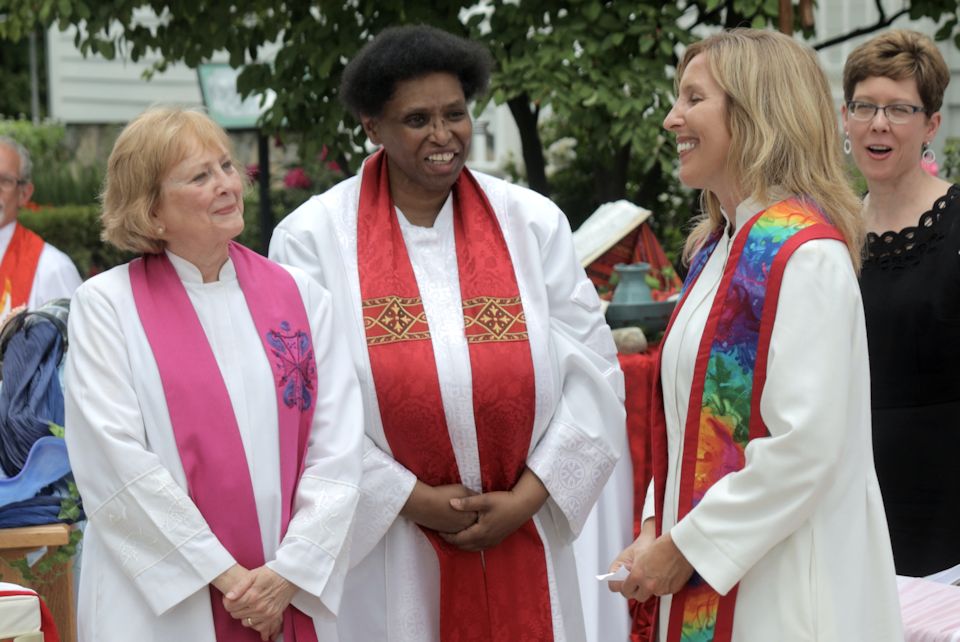 L-r: The Rev. Lynn Pier-Fitzgerald, the Rev. Dr. Margie Crawford, and the Rev. Tania Dozeman celebrate Tania's ordination as an Elder in The Michigan Conference. This year's service of Recognition, Commissioning, and Ordination was held at Troy Historic Village on June 8. ~ mic photo/Mark Doyal

The 2021 Service of Recognition, Commissioning and Ordination blended the traditional and the new as Bishop David Bard blessed 36 candidates for ministry on June 8 at Troy Historic Village.

The day a clergy person is ordained often is a memorable career highlight for a pastor. It is the culmination of years of internal debate about answering a call from God, education, many interviews and lots of anxiety. It is the pinnacle of recognition and the sending forth into a career of professional ministry.

The Michigan Conference worship service for Recognition, Commissioning and Ordination (RCO) of clergy historically has been held in a chapel, auditorium or grand hall packed with family, friends, and conference clergy colleagues.

The 2021 Service of Recognition, Commissioning and Ordination was held at Troy Historic Village on June 8. The ceremonies will be broadcast on the Michigan Conference website and Facebook page June 13 at 1pm. Join in the celebration!

But as the Michigan Annual Conference continues to celebrate this year’s theme of “Sing the Lord’s Song” in a foreign land, the 2021 service has moved. It will take place outside in front of a historic church at the Troy Historic Village, with just a few dozen people and many health safety protocols in place as a result of an unprecedented pandemic.

“The service falls in line well with this year’s theme of singing the Lord’s song in a foreign land. It will look stranger than a normal ordination service for us,” said Nancy Arnold, Michigan Conference events planner. “It takes place in a historic village. We have some ties to old Methodism, which reminds us to sing in a very different place. We only have one musician, the Rev. Caleb Williams, present and minimal crew. It is a very limited number of people on site.”

The service will be broadcast on the Michigan Conference website and Facebook page June 13 at 1pm. It also will be posted on the website for later viewing.

Conference planners expanded the service to include the 2020 and 2021 ordination classes following last year’s postponement due to the pandemic. (See pages 34-39 of the Program Guide for names and faces.)

“There will be 36 candidates, including five transfer candidates who will be recognized, at this service,” said Rev. Lindsey Hall, the RCO coordinator for the Board of Ordained Ministry. “It will be outside this year. But we also are including traditional hymns, including a newer tradition of Bishop David Bard singing a solo verse of ‘The Servant Song.’”

One ordinand is excited and nervous about the service. “This is a big change for my ministry,” said Rev. YooJin Kim, pastor at Onaway and Millersburg churches. “The different way of holding the ceremony is taking another step into nature and being under the big sky. God calls us in that same way.”

Hall noted a personal sadness as she planned for this year’s service. “Many persons have received a tug at their heart at the RCO service to consider going into the ministry,” said Hall. “While we won’t have the response to the call in this year’s ceremony, please visit with a pastor or district superintendent if you feel that knock on your “door.”

The service will be conducted in front of the former First United Methodist Church of Troy church building that has stood at the Troy Historic Village since 2003. Originally built as an Episcopal Church in 1837 on Square Lake Road near Livernois Ave., a Methodist congregation purchased the church for a few hundred dollars in 1868. As the congregation grew, a classroom, kitchen, and community gathering space were added. According to historic records, in 1880, the women of the church oversaw the construction of an accompanying home, which served as the minister’s parsonage.

“Many months ago when we were planning for this service, we knew we wanted an outdoor venue due to the COVID-19 outbreak,” Arnold said. “We first looked at concert spaces, but those locations weren’t scheduling. Jen Peters, our current conference facilitator, former conference registrar and clergy spouse at Flint Court Street, knew what it would take. And she had been hired last year as the executive director at the Village.”

This year is a highlight for the many THV volunteers. “We have worked with the Troy Garden Club for years and they maintain our garden beds,” Peters said. “While sprucing up this year, they are working toward bringing great beauty to this event.”

A 2020 deacon candidate for ordination said he thought the original postponement and changes in the service were fitting with his journey to ordination. “During my ordination journey, I first received a “not yet” at the conference level,” said Rev. Rodney Gasaway, a deacon serving at Livonia Newburg and Chelsea First UMCs. He said he also experienced several other delays in his process, including the final ceremony. “I was disappointed last year when the decision was made to postpone, but I now see the delay as one more step in my journey.

“There is a special feeling when taking part in something in a historical setting,” Gasaway added. “Traverse City is beautiful, but being at a historical church rather than an auditorium feels more personal. It presents a historical connection or feeling of being part of something older and grand.”

Each of the 36 honorees has been permitted to have two guests, which includes their sponsor, present for the service. “We are grateful to the United Methodist Foundation for sponsoring our reception following the service for the limited number of guests,” Arnold said.

“With all of the changes this year, we certainly are in a strange land, but we’re comfortable,” Arnold said.

Melding traditions and adjustments in a new location have been a challenge for conference planners. Likely for the 36 honorees, it simply will add an unforgettable setting for a memorable life event.