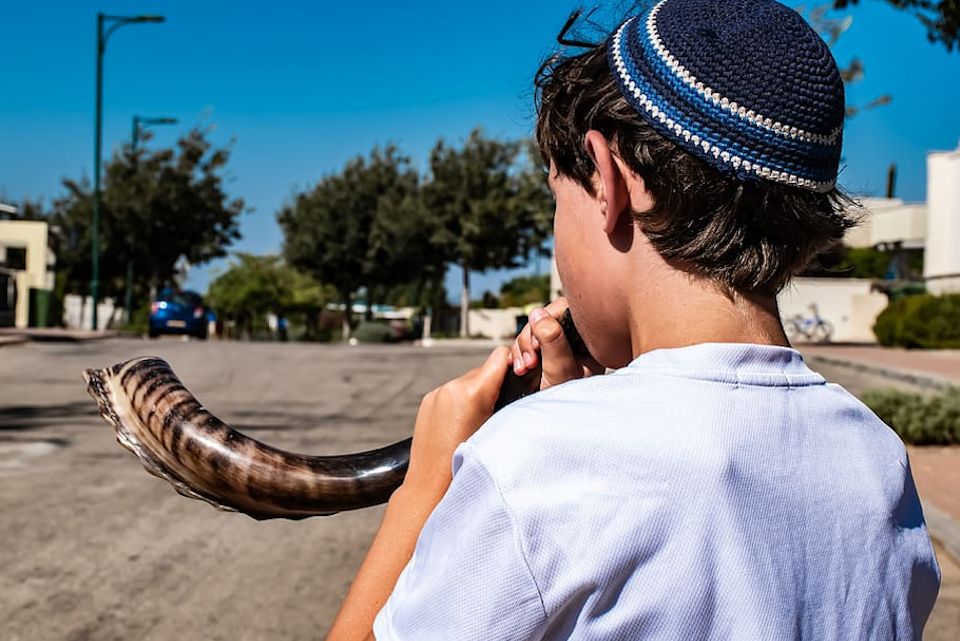 Glenn Wagner explains, "The story of Abraham is read on Rosh Hashana, and the shofar (ram’s horn) is blown like a trumpet to serve as a reminder that God allowed Abraham to sacrifice a ram instead of Abraham’s son Isaac."~ Creative Commons photo

This month Jews will observe two of their holiest days, Rosh Hashanah and Yom Kippur. Jesus would have surely observed these holy days. So, we remember them, too.

September is an important month for the Jewish people. This month Jews will observe two of their holiest days: Rosh Hashanah and Yom Kippur. Recalling these Jewish traditions can help us better understand our Christian beliefs. Lessons from these important holy days can also help us navigate through a time of great personal and communal stress.

“I know this may come as a shock to some of you,” offered the distinguished Christian theology professor at an interfaith Jewish-Christian dialogue, “but we need to acknowledge that Jesus was not a Christian!” There were a few gasps in the room followed by silence, as the seismic implications of his pronouncement settled into the consciousness of the mostly Christian audience. The Jewish attendees nodded knowingly. The professor’s truthful claim was not a surprise to them.

He continued, “Jesus was not Roman Catholic, Orthodox, Lutheran, Baptist, Methodist, or Evangelical. The name ‘Christian’ wasn’t even used for followers of Jesus until almost a decade after his death and resurrection. According to Acts 11:26, Jesus’ followers first called themselves Christian at Antioch, the place where Paul and Barnabas were commissioned as missionaries.”

The professor added, “Jesus was Jewish. He was born to Jewish parents. He was circumcised, as were all Jewish male children. All the scripture that Jesus held sacred was what Christians call the Old Testament. The New Testament had not even been written while Jesus was living in Judaea. Jesus worshipped in the Jewish Temple in Jerusalem and taught in Jewish synagogues in places like Nazareth and Capernaum. Jesus was crucified as a Jew. Jesus’ genealogy in the Bible links him to a long history of prominent Jews like the patriarch Abraham and the great King David.”

He continued, “The vast majority of Jesus’ followers were also Jewish, including all 12 of his disciples. Those who first followed Jesus believed that their allegiance meant being a good Jew who also believed in Jesus and his teachings. It was not until years after Jesus’ death and resurrection that Christianity severed from Judaism over a conflict concerning the Christian acceptance of uncircumcised gentiles into full communion.”

The biblical scholar remarked, “The term, ‘Christ,’ which is the root for our word ‘Christian,’ is a title reserved by the Jews for their King and or their High Priest. It means ‘The anointed one’ and refers to the sacred anointing oil kept in the Temple and used only for the anointing of the High Priest and the King. Christians believe that this Jew, Jesus, is the Christ.”

“We should also remember,” taught the Professor, “the Apostle Paul wrote in his letter to the Romans that non-Jews who were accepted into Christian fellowship were like the branch of a wild olive tree that has been grafted into the cultivated Jewish tree. (Romans 11:17-24)  From the beginnings, Christians have been encouraged to value Jewish heritage.”

That presentation gave me a deeper appreciation for the important Jewish roots of the Christian faith.  I have been privileged to worship on special occasions with Jewish friends in their synagogues. Jewish contributions to our culture are significant. There are many points of similarity between Judaism and Christianity. Jews and Christians both observe the Ten Commandments, believe in prayer, compassion, generosity, and worship God.

This month Jews will observe two of their holiest days. Jesus would have surely kept these sacred days. Rosh Hashanah, the celebration of the Jewish New Year, will take place beginning on the evening of Friday, September 18th, and continue until the evening of Sunday, September 20th. Many Jewish families will gather over this weekend for special meals and worship as they welcome the year 5781 on the Jewish calendar.

According to Wikipedia, “Rosh Hashanah is a time of judgment and remembrance, on which God reviews and judges a person’s deeds in the past year. It is also a time of prayer and penitence. All debts from the past year are supposed to be settled before Rosh Hashanah. Many Jewish people in the United States seek forgiveness from friends and family before this event.

Some Jewish people will also perform the tashlikh on Rosh Hashanah. This is the custom of reciting prayers near naturally flowing water, such as a stream or river, and symbolically throwing one’s sins away in the form of small pieces of bread or other food. Faithful Jews will often avoid work on Rosh Hashanah and spend much of the day in the synagogue where the regular liturgy is expanded. The story of Abraham is read, and the shofar (ram’s horn) is blown like a trumpet to serve as a reminder that God allowed Abraham to sacrifice a ram instead of Abraham’s son Isaac.

Yom Kippur is connected to the story of Moses and the exodus from Egypt when God freed the Jews from slavery. Scholars differ on the actual date of the Exodus with estimates ranging from 1486 to 1186 BCE. The book of Exodus remembers their sin of worshipping a golden calf while Moses was on Mount Sinai receiving the Ten Commandments from God. When Moses came down from Mount Sinai and saw the golden calf, he was enraged and burned the idol his people had turned to in his absence. He then returned to the top of the mountain asking forgiveness from God.

Moses received that forgiveness on the 10th day and again descended from the mountain. From then on, Yom Kippur has been observed ten days after Rosh Hashanah as a climax to this season of penitent new beginnings.

Yom Kippur translates from the Hebrew as “day of atonement” or “day of cleansing,” and serves to remind us that God is God and we are not. Our freedom and our future are in God’s hands. I recognized on my visit to the wilderness of Sinai that without God’s mercy, God’s grace, God’s active presence, and willing obedience to God’s commandments, survival as a community in the wilderness is doubtful. Yom Kippur is an important annual reminder of our need for God and God’s guidance.

For nearly 26 hours from sundown Sunday until sunset Monday of Yom Kippur this year, Jews observing this day of atonement will abstain from food and drink as a means of self-denial and compassion. Some people may not even brush their teeth, wash, or bathe because the acts involve water.

The history of Yom Kippur also remembers a ritual practice known as “scapegoating” that traces its roots to Moses’ brother Aaron who was the first Jewish High Priest.

The scapegoat is one of two kid goats. As a pair, one goat was sacrificed (not a scapegoat), and the living “scapegoat” was released into the wilderness, taking with it all the sins and impurities of the penitent people. The Yom Kippur practice of sending the scapegoat away for the good of the people first appears in Leviticus 16:21-22.

“Then Aaron shall lay both his hands on the head of the live goat, and confess over it all the iniquities of the people of Israel, and all their transgressions, all their sins, putting them on the head of the goat, and sending it away into the wilderness by means of someone designated for the task. The goat shall bear on itself all their iniquities to a barren region; and the goat shall be set free in the wilderness.” — Leviticus 16:21-22, New Revised Standard Version

The annual Yom Kippur practice of scapegoating to atone for sins was discontinued in 70 AD after the destruction of the Jewish Temple in Jerusalem. In 2013 The Washington Post reported on an e-scapegoat service offered to allow Jews to heap the burden of their remembered sins onto the back of a virtual goat to help facilitate a new spiritual beginning. After listing of sins, the virtual e-goat is sent to carry them off into the internet wilderness of the world-wide-web.

Christians believe the death of Jesus on the cross was the one full and sufficient sacrifice offered on our behalf by God that atones for the sins of the world. But Christians, like Jews, are known to spend time, often during the season of Lent, seeking to cleanse life of sins that interfere with faithful devotion and service.

Despite Christian belief in the sufficiency of Jesus’ sacrifice as an atonement for all sin, the ancient practice of scapegoating is still being practiced in secular ways. Instead of sending a goat into exile, the practice can be seen when a team falls short of expectations, and the coach is fired so that “the team can move in a new direction.” Fixing the blame on someone and making the sacrifice satisfies rabid fans displeased with the disappointing season. Similarly, politicians facing heat from the electorate for policy decisions gone awry have been known to cast the blame and fire an underling to help change the narrative for the masses and to lessen political fallout.

We can all be grateful for these Jewish observances of Rosh Hashanah and Yom Kippur. After months of pandemic forced separation and an increasingly contentious political climate, it feels right to set aside time for spiritual renewal and penitence. It is good to confess our individual and our corporate sins honestly. It is important to work at healing fractured relationships and to repay our debts. It is healthy to publicly acknowledge again that we desire for our sins and their toxic effects to be washed away so that we may experience new beginnings. Those who wrestle in the mud appreciate the value of a good shower.

It is also essential, as followers of Jesus, to remember that we find our forgiveness purchased not with the blood of a sacrificial goat nor with a list of our shortcomings tossed in a river, but through the life of Jesus given for us on a Jerusalem cross over 2,000 years ago.

J.W. Alexander wrote of this sacrifice in a hymn in 1830 entitled “O Sacred Head Now Wounded.”

O sacred Head, now wounded,
with grief and shame weighed down,
Now scornfully surrounded
with thorns, Thine only crown;
O sacred Head, what glory,
what bliss till now was Thine!
Yet, though despised and gory,
I joy to call Thee mine.