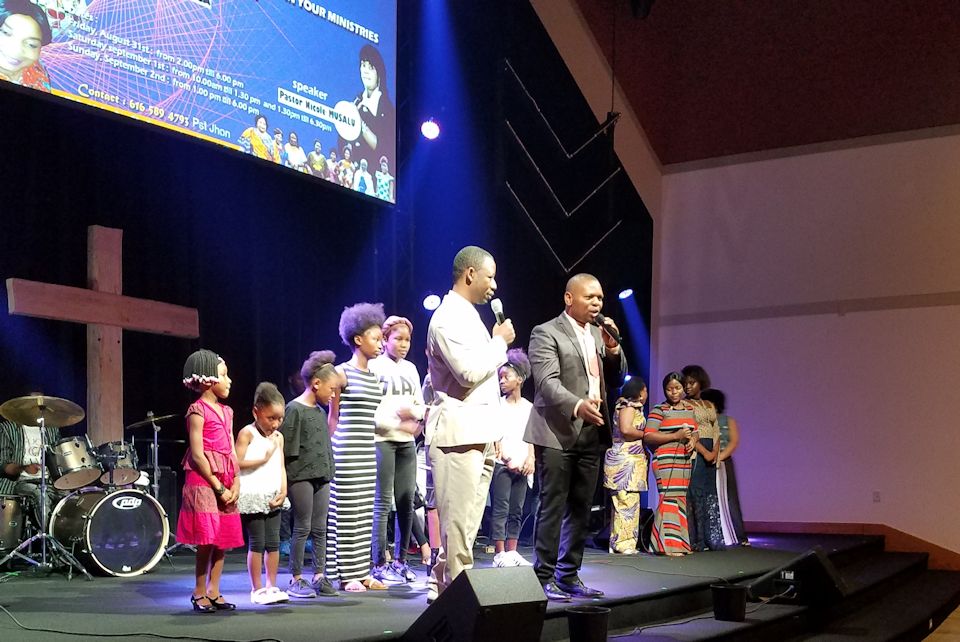 Pastor Banza Mukalay, front left, founded the Restoration Community Church to be in ministry with Congolese immigrants in Grand Rapids, MI. The congregation welcomed the family of Patrick Lyoya while meeting at the South Wyoming campus of Cornerstone UMC. (Note...they are not present in this file photo). ~ photo courtesy Kay DeMoss

On April 4, Patrick Lyoya was killed by a Grand Rapids Police officer. His pastor, Banza Mukalay of Restoration Community UMC in Wyoming, MI, remembers a brother and a friend.

Pastor Mukalay says Patrick came to Restoration United Methodist Church in Wyoming, MI about five years ago. Like Mukalay, he fled his homeland of the Democratic Republic of Congo to escape the continued violence which would claim almost 3.8 million lives between 1997 and 2003. Patrick’s family spent 11 years in refugee camps in Malawi before finally being admitted to the United States in 2014, coming to settle with the rapidly growing African diaspora in Grand Rapids. Like most refugees, they were eager to become self-sufficient and both he and his parents found work in various jobs to support the family. When he died, he was 26 years old.

“We left our homeland and came here,” said the pastor, “to find safety, security and freedom and to avoid the violence back home and now this happens.” Pastor Mukalay was ordained as a United Methodist Elder in Congo, then spent 15 years in refugee camps in Tanzania before arriving in Grand Rapids. He founded Restoration Community United Methodist Church to meet the needs of the growing African refugee community in the city. They first met in South Wyoming UMC, then moved to Wesley Park United Methodist Church.

Obviously, Patrick Lyoya’s death has had a profound impact on the congregation. The pastor says, “We were shocked. We couldn’t believe something like this could happen in the United States. We are shocked, frustrated, and discouraged to see a young man killed like an animal.” One of Pastor Mukalay’s concerns is the children of the church and community. He says refugee families came to this country so that their children could flourish and thrive. “I only have one son,” he said.  “I have had to try to help him when he asks, ‘How can this be?'”  Then of course, on top of their own trauma, the tragedy in Grand Rapids was followed by the shooting and deaths of Black Americans in Buffalo. “Our children are scared,” Mukalay said, “and they wonder, ‘Why did we come here if this is what happens?’”

For the congregation, this has also been a time to draw together for comfort and for hope. Pastor Mukalay is grateful for the support of Bishop David Bard and Midwest District Superintendent Margie Crawford. He says, “As United Methodists, we are one!  We are the church! We are the Body of Jesus Christ, so let’s be united.”  Mukalay believes Michigan United Methodists need to “join hands and go together to the community preaching the love of Christ and showing the love of Christ if they are to change the hearts and minds of people around them.”

When asked what other churches can do in a time like this, Pastor Mukalay said, “We need to know you stand with us. We need to see your faces, white faces. We need you to come and worship with us so we know we are not alone.”