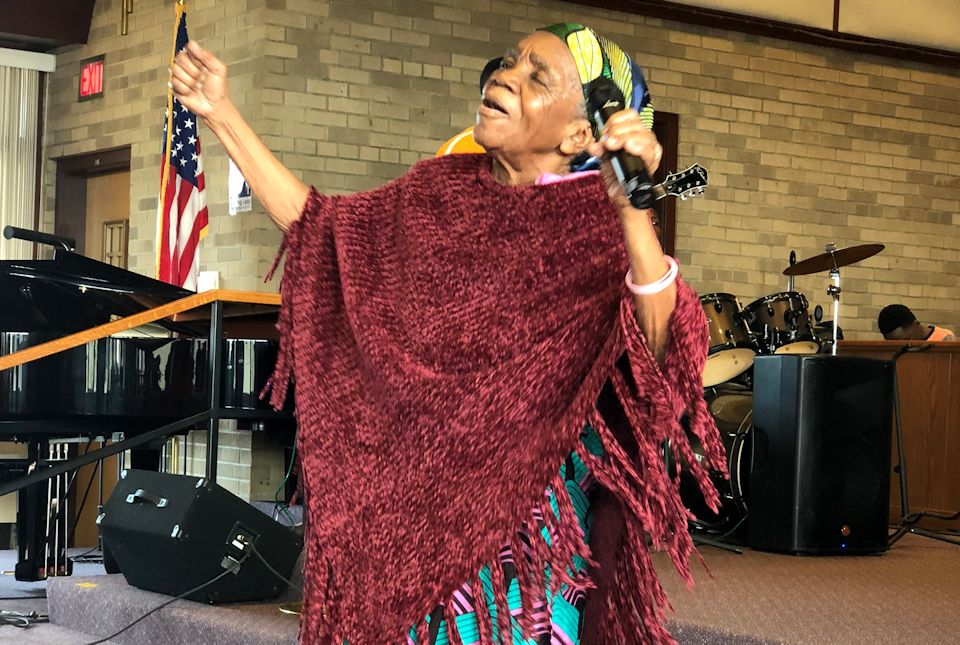 Wyoming Wesley Park UMC worship in English. Restoration Community Church worships in Swahili. But they share a language of welcome.

If you are around Wesley Park United Methodist Church in Grand Rapids on a Sunday, you might hear the spontaneous shout of “Karibuni!” which means “Welcome” in Swahili. It is the shared word of greeting between the traditional members of Wesley Park UMC and the African worshipers at Restoration Community Church. It reflects the warm relationship which has developed between the two congregations as they share their life together.

Restoration Community is the work of Pastor Banza Mukalay, a refugee from Congo. Born into a United Methodist family in Congo, he was forced to flee his homeland and spent 15 years in a refugee camp in Tanzania before he and his family were able to come to Grand Rapids. In 2009, while still in the refugee camp in Tanzania, he was ordained as a United Methodist pastor. They were finally granted permission to immigrate to the USA in 2012.

Very soon, he and his family, along with several other Congolese families, came to worship at South Wyoming United Methodist Church, and the pastor, Rev. Marcia Elders, said, “…our lives were changed. Many of our friends had gone on mission trips to other parts of the world, but for my spouse David and me, the world came to us. It didn’t take long to discover that Banza was an ordained United Methodist pastor.  Then I knew God was doing a new thing!”

Within a year, about 150 Africans were worshiping in Swahili each week. When South Wyoming Church became a campus of Cornerstone, they continued to worship there until renovations on the building led them to move to Wesley Park UMC and Restoration Community was formed. Pastor Banza says, “It feels like home to us. We are happy to be at Wesley Park.”

Now retired, Rev. Elders says, “It has been a joy to watch the growth of this UMC mission congregation. It has been exciting to witness refugee men, women, youth, and children come together to worship God in their native tongue, to care for each other, and to welcome newly arriving Congolese refugees who come to Grand Rapids.”

Rev. Dean Prentiss is the pastor of Wyoming Wesley Park UMC. He says the host congregation has welcomed the Africans into their shared space and life. They have created an “Acts Council,” including representatives of both groups to pray, share concerns, work out conflicts, and plan together. Dean says, “It’s been an absolute joy to be one family. Pastor Banza glows with the love of Jesus Christ as he helps newly arriving immigrants learn English, get jobs, and settle into life in Grand Rapids. He is a sign of hope and strength for his people.”

On Sundays, the Wesley Park congregation worships in the morning. The Restoration congregation gathers at 1:00pm with worship lasting until about 3:00pm, then fellowship until 6:00pm. They meet for prayer on Saturdays from 10:00am until 3:00pm.

The congregation is predominately Congolese, but it also includes persons from Burundi, Uganda, and Rwanda. The common thread is the Swahili language and the shared African identity. But Pastor Banza says the goal is not just to reach African immigrants. “The goal,” he says, “is to have Americans join us in a shared vision of transforming the world through the disciples of Jesus Christ.” The vision of the congregation is based on Acts 2:41-43, where, he says, “…the church came together, shared all things in common and saw many being saved.”

Restoration is not only interested in what they can do in Grand Rapids. They have already raised funds and sent mission teams back to Africa to minister to refugees among the 70,000 persons in camps in Tanzania.

Rev. Prentiss says, “We are so glad Restoration has found a home with us. Wesley Park has learned that we are all connected in Christ, and we are blessed to have them with us.”

Restoration Community is one of three new ministries reaching out to African immigrants in Michigan. French United Methodist Church, launched in January at Embury UMC in Birmingham, is seeking to minister to immigrants from the French-speaking countries of Africa such as Ivory Coast as (Cort d’Ivoire), where there is an active United Methodist Church. Conference Staff person Dirk Elliott reported, “We had the official launch for French UMC on January 26, and Embury Church was filled.”

Under the leadership of the Revs Rob Cook and Eric Mulanda, Mt. Hope UMC in Lansing has welcomed immigrants to the point that one-third of the worshiping congregation is African. They have a Swahili choir and an expanding ministry to new arrivals in the community.

Across the state of Michigan, the United Methodist Church is saying, “Karibuni! Welcome to the African immigrants coming to our state.  “Karibuni, in the name of Jesus Christ!”