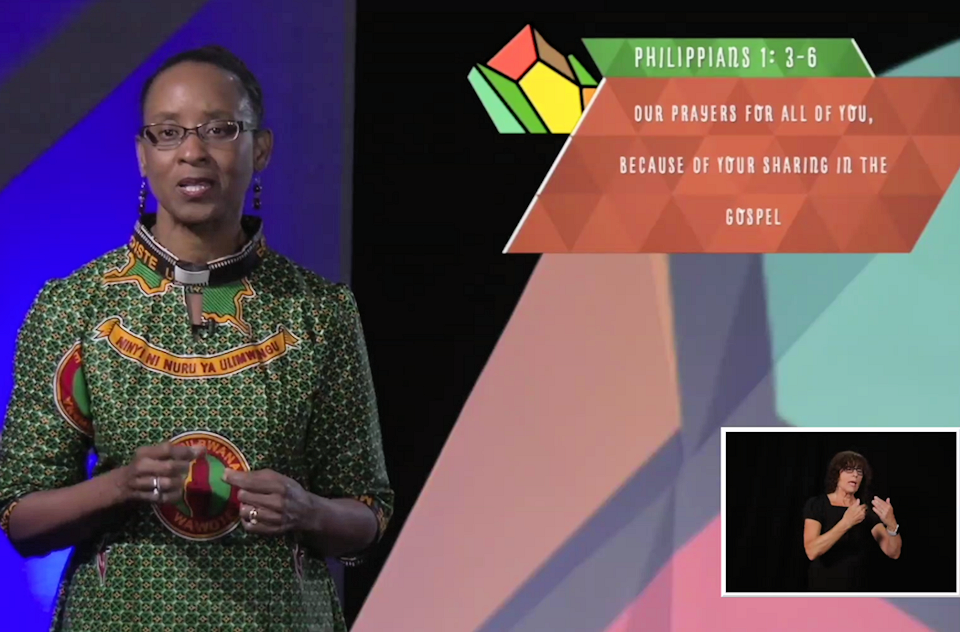 The Rev. Kennetha Bigham-Tsai joined co-chair Laura Witkowski in sharing the report of the General/Jurisdictional Conference Delegation at the Michigan Annual Conference, Friday, June 4, 2021. They looked back over the year of waiting during the pandemic and forward to the year leading up to the General Conference in August 2022. ~ mic screenshot

The June 4, 2021 session of the Michigan Annual Conference featured various reports with a focus on Anti-Bias/Anti-Racism, justice, mission, and Michigan Conference’s connection to United Methodists around the globe.

June 4, 2021 | LANSING — The Friday session of The 2021 Michigan Annual Conference featured reports with bridges for Michigan United Methodists to enter the world and transform it.

There were opportunities to engage in anti-bias, anti-racism work within the conference, with the Native Americans and hungry children in the state, and covenant partners in Liberia. The report of the Michigan Delegation to General/Jurisdictional Conference and the opportunity to endorse a candidate for the episcopacy were moments of claiming and celebrating the connection with the worldwide United Methodist Church.

Members heard invitations to become active in ministries of justice and support missions near and far.

The Rev. David Eardley, senior pastor of Rochester: St. Paul’s United Methodist Church, serves as the chair of the Commission on the Annual Conference Session. He addressed members during opening moments of the session on Friday. “I encourage us to celebrate the incredibly diverse pathways and legacies of the people of The Michigan Conference,” he began.

“In our commitment to live into the Acts of Repentance to Native and Indigenous Peoples, I would like to take the time to honor the First Peoples of this area for caring for this abundant place,” he added. Eardley named the members of the Anishinaabe nations: the Ojibwe, the Keepers of Faith; the Odawa, the Keepers of Trade; and the Potawatomi, Keepers of the Fire. “Even when injustice stripped away the wealth of soul and land of the Anishinaabe peoples, they persevered and never lost dignity,” Eardley explained.

Eardley continued, “Immigrants would come to these shores fleeing famine and poverty. This place would become the final passage of a Underground Railroad to freedom for the African slaves and the cities would become the peace-filled homes to Vietnamese, Guatemalan and Middle Eastern refugees of violence.” He also noted that Michigan residents advocated “all the way to the Supreme Court” to protect transgender people and recognize same-gender marriage. Still, unjust treatment continues, barriers of hate still exist, and the struggle for recognition for rights persists.

He concluded, “At this time as we come together as The Michigan Annual Conference, we humbly ask forgiveness. The United Methodist Church has too often been silent and complicit in these harms. To all our siblings, on behalf of Michigan United Methodists, we recognize the past atrocities that were inflicted upon you out of racism, injustice, and doctrinal abuse. We honor you,” Eardley concluded. A moment of silence followed.

The Rev. Jon Reynolds, Chair of the Liberia Ministry Partners of The Michigan Conference, reminded members that a Covenant Partnership was originally established between the Detroit and Liberia conferences in 1999. “Over 20 years, our conferences have worked to bless one another and support the ministries of each country. We graced each other’s annual conferences and our covenant led to the creation and continued support of the Bishop Judith Craig Children’s Village in Liberia,” Reynolds said.

When the new Michigan Conference was formed, the affirmation of a new covenant was planned. A delegation from Michigan traveled to the Liberia Annual Conference in February 2020. They witnessed a nearly unanimous approval of the new relationship, which was signed by Bishop Samuel Quire.

The Ministry Partners have identified education, clean water, and agricultural initiatives as the primary needs for support. Reynolds stated, “It is unclear whether Michigan and Liberia conferences will end up in the same denomination after the next General Conference. … I am thankful for the relationships that we have built with our sisters and brothers in Liberia. I celebrate that we can find common cause in ministries addressing basic human rights and essential community development.”

Members of the Legislative Committee approved the Covenant Ministry Partnership with Liberia Annual Conference (Resolution #2021-18) with a 98% vote of affirmation, placing it on the Consent Calendar. The members of the Annual Conference confirmed that action by adopting the Consent Calendar on Friday morning. Bishop Bard noted, “This is a gift of our global Church. It is a relationship that will continue to bear fruit. The Michigan Conference has the opportunity to give and to learn and receive. In that there is grace.”

Bishop David Bard made introductory remarks stating, “Racialized thinking, the elevation of whiteness, and discriminatory and oppressive behaviors have long been a part of our history, and they are antithetical to the gospel, to the teaching that all human persons are created in the image of God and that God’s grace is available to all people.” Those realities led the bishop to form an Anti-bas/Anti-racism Working Group in The Michigan Conference. He invited the co-chairs to speak to the importance of this work.

The Rev. Dr. Kevin Smalls began, “We have seen, like never before, the polarization of America … two of those matters that have continued to emerge are something we cannot ignore, sweep under the carpet or avoid. That is the matter of racism and bias.” He called for the church to be bold in its denouncement of racism and bias. Smalls denounced police engagement, bias imposed on students, parents, and communities, and vandalism toward churches supporting racial equality.

He noted the working group has met and began “the necessary process to carve a path that will equip and support congregations that seek an avenue to address racism and bias; to equip pastors with tools to lead congregations and communities through this most important work.” Smalls asserted “Now is the time for all to reclaim the promise made at our baptismal and membership vows,’to resist evil, injustice, and oppression in whatever forms they present themselves and to accept the church as a people of all ages, nations, and races.”

The Rev. April Gutierrez said the efforts of the working group are to equip the Michigan Conference to lead in this area in a way that recognizes the desire to live as a Beloved Community, informed by our Methodist history in the abolitionist movement.”

Gutierrez outlined the resolutions that members would consider during Saturday’s legislative session: 1) affirm the ABAR working group, its membership, and leadership, amenable to the Conference Leadership Council; 2) provision of training and support for Cross Racial/Cross Cultural Appointments in collaboration with the Board of Ordained Ministry and Cabinet; and 3) ABAR training for active clergy, conference, and district staff every four years beginning in 2022.

Gutierrez ended, “After listening to each other and the communities we are part of, [the ABAR working group] believes this is a good first step. We expect this to be difficult and uncomfortable work that will leave each of us changed in different ways. We believe this is the work God is calling us to in this moment.”

Bishop Bard added, “This work is essential to our journey with Jesus, for it is soul work as well as community work.”

The Rev. Perez began with hope. “We live in a challenging time, but also in a time of great possibility. At this moment in our denomination’s life, I believe the Annual Conference is the most functional connectional structure and the place where The United Methodist Church will find its way into the future God is calling it to.” Perez named this season of challenge and possibility, “Both/And.”

The Director celebrated the “historic public health effort to vaccinate for COVID-19” and the emergence from the global pandemic. But he cautioned that “The impacts of COVID-19 — physical, mental, and spiritual — will be felt for years to come.” He lifted up food insecurity as a major concern. “To put it simply, people in Michigan are hungry.”

Perez noted, “The number of children who are food insecure increased by 63% over the past year. This means that over half of the children living in Michigan do not have enough food to eat on a regular basis.” He thanked churches and UM-related non-profits in front-line ministries, “operating pantries, hosting feeding programs, and actively seeking to disrupt the cycle of generational poverty.”

He concluded by outlining the “one small step to respond” represented by the fifth 5K sponsored by The Michigan Conference. “We are talking one small step to respond” by walking, running, or riding anytime between June 3-6. Perez also recommended resources curated by Kathy Pittenger, Conference Coordinator of Children’s Initiatives, that teach about food insecurity in Michigan.

Co-Chairs of the Michigan Conference Delegation to General and Jurisdictional Conferences made a joint presentation on Friday afternoon.

Laura Witkowski and the Rev. Kennetha Bigham-Tsai spoke of the early months following their election at the 2019 Michigan Annual Conference. “The Michigan Delegation is the youngest and most diverse ever elected,” Witkowski said. “We began our service expecting a General Conference in May 2020,” Bigham-Tsai noted. “We developed a Vision Statement, and began reading the 1,061 pages of information and legislation in the Advance Daily Christian Advocate (ADCA).” Witkowski reminded members that it was a special Michigan Annual Conference in March 2020 that sent the Protocol of Reconciliation and Grace Through Separation to the docket of that 2020 General Conference.

When the pandemic struck and the Commission on the General Conference postponed the assembly not once, but twice, the Michigan Delegation began to meet on Zoom. “Dust has been gathering on our ADCA, but we have not been idle,” Witkowski remarked. The co-chairs outlined ways they have prayed for The Michigan Conference and participated in the Intercultural Development Inventory, “beginning the work of dismantling racism in the UMC.” They also outlined ways delegation members have been active in connectional ministries in and beyond Michigan.

“As a delegation, we have constantly sought connection,” Witkowski noted. “We met with the Minnesota delegation, with whom we share Bishop Bard. We attended the Pre-General Conference Briefing and met with other NCJ delegates in Illinois, and with local churches — Troy UMC and Big Beaver UMC. We have also worked with delegates around our worldwide connection on the future of the UMC, affirming the Christmas Covenant and continue to support the Protocol.”

A reading of sections of the Delegation’s Vision Statement ended the report of the Delegation. The co-chairs read the words of Philippians 1:3-6, Witkowski concluding, “‘We are confident of this, that the one who began a good work among you will bring it to completion by the day of Jesus Christ,’ … or whenever General Conference actually happens.”