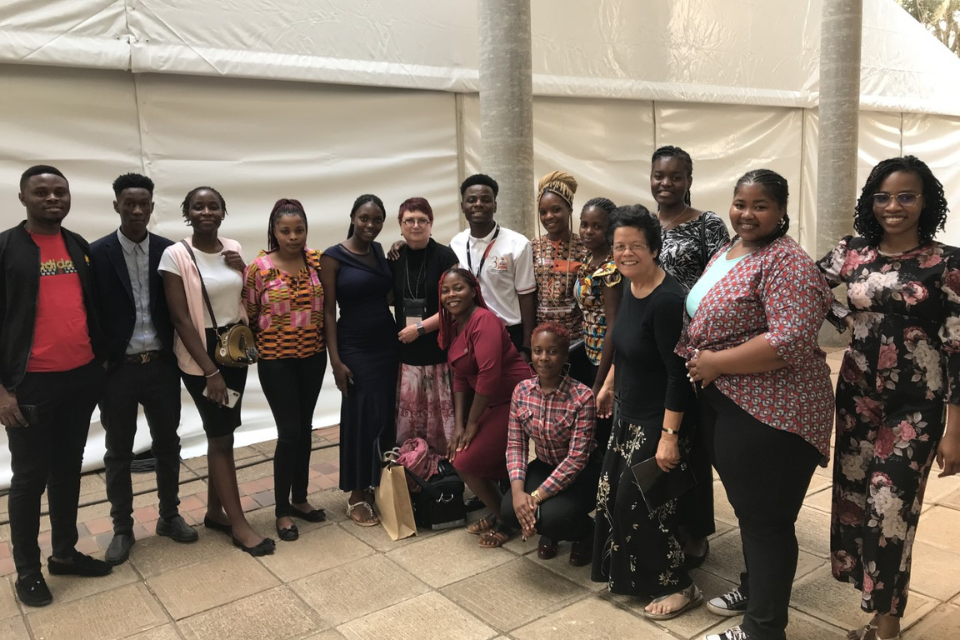 Over 3,000 guests gathered on Oct. 22-23 to celebrate the 30th anniversary of Africa University, a United Methodist institution with a deep relationship with the Michigan Conference that has grown to become a leader in higher education in Africa. A group of 85 United Methodist clergy and lay persons from the United States, including one Michigan pastor, joined the festivities.

Rev. Jennifer Jue, an ordained elder from the Michigan Conference and the pastor of Jackson: Brookside, Trinity, and Calvary UMCs, traveled to Africa University as a financial supporter of an endowed scholarship for women studying theology and pursuing full-time ministry.

Located in Mutare, Zimbabwe, Africa University has a mission to raise up world-class leaders from all over the continent. The first class of 40 students from six African nations began their studies in 1992, the year marked as the university’s anniversary. Today, there are over 3,000 students (over 500 part-time) from 28 African countries. Africa University boasts a 97 percent graduation rate, with 712 graduating in 2022. There are now over 10,000 alumni.

Close ties between Africa University and the Michigan Conference have been evident since the university’s beginning. The Rev. Dr. Roger Ireson, a former pastor of St. Timothy’s UMC in Detroit, was instrumental in the founding of the university when he was General Secretary of the General Board of Higher Education and Ministry (GBHEM). In 1988, the year Ireson was elected General Secretary, General Conference approved the “Africa Initiative,” which provided initial funding for what would eventually become Africa University. Ireson also recruited three other Michigan United Methodists as part of the team that created the university.

More recently, Iowa Bishop Laurie Haller visited Africa University in 2018 for the dedication of the Ubuntu Center, a 46-bed guest center for visitors. Several years earlier, as the superintendent of the Grand Rapids District of the West Michigan Conference, Haller led a successful fundraising campaign where some 450 churches in Michigan raised $500,000, which was later matched by an anonymous donor, bringing the total to $1 million.

Rev. Jennifer Jue first learned of Africa University while in seminary at Garrett-Evangelical Theological Seminary, in Evanston, Ill., when the Rev. Dr. Beauty Maenzanise, dean of the theology faculty, presented a lecture in 2007 on the nation of Zimbabwe and Africa University. Jue was inspired by what Africa University was doing for theological education for women in Africa and felt moved to establish an endowed scholarship to support future students.

As a long-time educator before entering full-time ministry, Jue believes in the value of education to equip young people to serve with intelligence, skill, and integrity. She said, “I believe the youth and young adults of the world should all have access to quality education and be provided with the educational foundation needed to serve their communities and nations.”

Jue’s desire to pay it forward and financially assist women studying theology was also influenced by the fact that she had received scholarships as a student at Garrett-Evangelical and understands the financial burden theological education can become.

During last month’s visit to Africa University for its 30th anniversary, Rev. Jue valued meeting students and learning their names, nationalities, and areas of study. She said it was amazing to witness the power of education to change lives and impact students from different countries as they study and fellowship together on one university campus. “It was a joy,” she said,” to experience these students’ excitement and commitment to their educational experience . . .  and then hear their plans to return to their countries as leaders in different areas.”

Another highlight for Jue was worshiping together in Kwang Lim Chapel during the thanksgiving worship service on Sunday, Oct. 23. It was a wonderful opportunity to thank God and reflect on the past, present, and future of Africa University. It was a holy, spirit-filled space with music and jubilation. Jue reflected, “The Africa University choir and their spirited music is always a highlight, as students from different countries of Africa come together and praise God in song and movement.”

For a taste of the celebration and worship that Rev. Jennifer Jue and others from all over the world experienced at Africa University, watch the summary video below, created by the East Ohio Conference.

Financial gifts of any amount are welcome to support student scholarships at Africa University. Those who are interested can give through this Advance link. If you are an EngageMI church, report the giving amount to the Michigan Conference since Africa University is an approved International General Advance Project.