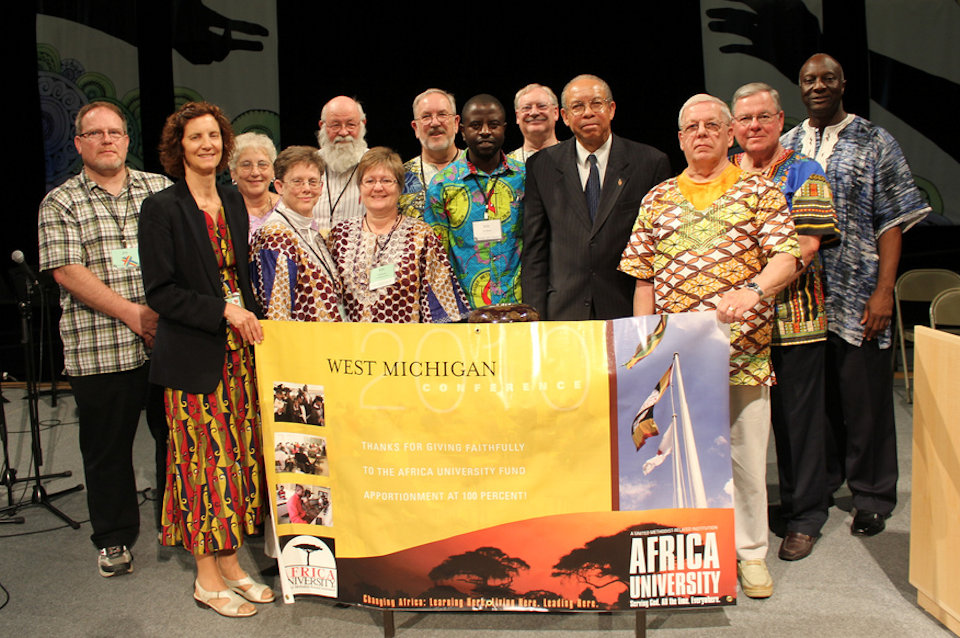 Iowa Bishop Laurie Haller visited Africa University to see the Ubuntu Center, the final product of a $500,000 fundraising campaign she led while a district superintendent in Michigan.

As the superintendent of the Grand Rapids District in the West Michigan Conference, Haller led a campaign toward the construction of the center, which provides a place for people to stay on campus.

“We wanted to do something meaningful at Africa University and worked with James Salley to determine the needs at the institution,” she said during the October visit to the Zimbabwe campus.

Salley, associate vice chancellor for Institutional Advancement for the university, said visitors needed a place to stay on campus, so a retreat center was proposed.

About 450 churches in West Michigan raised $500,000, which was then matched by an anonymous donor, bringing the total to $1 million.

“It was a wonderful thing. It helped us come together for a common purpose. Some rooms at the center have plaques honoring individuals, churches and districts for their substantial donations,” said Haller.

Those who contributed at least $20,000 have a room named after them.

Haller, now bishop of the Iowa Episcopal Area, was accompanied by her husband, the Rev. Gary Haller, and a nine-member team from Iowa that included five district superintendents.

At a dinner held in her honor, Salley said Haller caught the vision of Africa University and dreamed of building a meeting place that would also be a place of peace and reconciliation.

Ubuntu is an African term for humanity to others. Literally, the word means “I am what I am because of who we all are.”

The Ubuntu Retreat Center is a 24-room accommodation facility on a hill overlooking the Kwang Lim Chapel. The center has allowed the university to save money on accommodations for meetings and transportation costs, said Isidore Fungai, the university’s acting director of Information and Public Affairs.

Before the center was built, visitors stayed in hotels in Mutare, a city almost 20 kilometers (about 12 miles) away. They had to be driven to the school and returned to their hotels daily.

“Most visiting groups now make use of Ubuntu Center and the university has realized a substantial amount of revenue from it,” said Fungai.

Irene Chibanda, the university’s bursar, said the Ubuntu Center had contributed significantly to the university’s finances by reducing hotel bills that used to be paid for accommodation outside the campus.

“We are now able to host our visitors, board members and external examiners. For the full year ending 30 June 2018, we got over $36,000 income from the center,” Chibanda said.

“People compare it to local hotels and this has given us good publicity,” she said.

But Salley noted the lasting contribution of the center is more than dollars and cents.

“It is also in the fact that it allows for more informal, intimate and impactful interactions than we ever had with stakeholders and friends when most of them stayed off campus,” he said.

The center allows visitors time to take in the natural beauty of the campus. “You can spend a bit of time in conversation with students and staff after dinner, outdoors or in the halls of residence and share about your life experiences, spiritual journey and hopes for the future,” he said.

The Zimbabwe Tourism Authority has recommended the center be publicized because it can compete with some of the best accommodations in Manicaland, the province in which Africa University is located, he said.

Because of the quiet atmosphere, some people have stayed at the center for weeks while writing their memoirs or conducting workshops in the center’s two conference rooms.

“This is a good facility which exceeded my expectations. The place is very clean and the people are phenomenal,” said Kiboko, who stayed at the center.

The Rev. Gayle Wilcox of Cedar Falls, Iowa, said staff members were very welcoming and went beyond what was required to make guests comfortable.

“The Ubuntu is a great place for connecting with people from across the globe. I was impressed by the private bathrooms, which are not usually found at retreat centers. The beds were wonderful and comfortable,” Wilcox said.