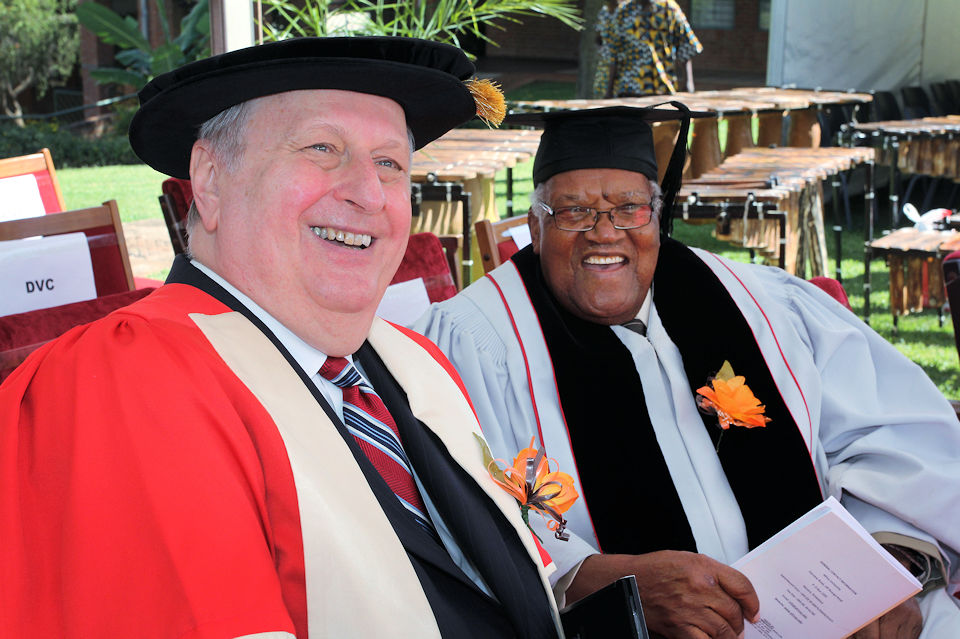 The Rev. Roger Ireson and the Rev. John W. Z. Kurewa, both received honorary Doctors of Letters for their contributions during the March 23, 2013, 20th anniversary celebration of Africa University. Ireson was top executive of the United Methodist Board of Higher Education and Ministry when the university was approved in 1988. Kurewa was the university's founding vice chancellor. ~ UM News photo/Kathleen Barry

The Rev. Dr. Roger Ireson provided key leadership in the birthing of Africa University. He reflects on how a century-old vision took shape in Zimbabwe.

In 1898 Bishop Joseph Hartzell stood on the peak of Mt. Chrimba and looked out over the broad valley surrounding the Old Mutare Mission in what was then Southern Rhodesia. He had a vision of children and young adults coming from across Africa to a place of learning in the valley. Almost a century later, that vision came to fruition in 1992 when the first class of 40 students from six African nations gathered for their first semester at Africa University. Today the university boasts about 1,800 students from 36 countries and over 4,000 graduates serving across the continent. It is one of the great success stories of United Methodist connectionalism and would never have come to pass without the commitment and financial support of the General Conference, annual conferences and local churches around the world. And a Michigan pastor, the Rev. Dr. Roger Ireson, was at the helm for many of those early years.

In 1988, Roger was the pastor at St. Timothy’s United Methodist Church in Detroit when he was elected General Secretary of the General Board of Higher Education and Ministry (GBHEM). That was the same year the General Conference approved the “Africa Initiative” which included $2.5 million per year for the quadrennium for the initial funding for a new university. Roger remembers that even in the interview for the job the significance of this project for the new General Secretary was stressed. It would be the first General Conference approved United Methodist university on the African continent, built upon a long history of Methodism’s commitment to education in seminaries and schools like Old Mutare Mission around the world.

One of Roger’s first tasks was to gather the team to create the new university. One of the people on that team was Dr. John Kurewa, a classmate of Roger’s at Garrett-Evangelical Theological Seminary in the 1960’s. Kurewa would ultimately become the first vice chancellor of the school. Roger called upon Methodist educators from around the world whom he had known as a PhD student at Manchester and Cambridge and through his many contacts from living abroad. Other Michigan United Methodists included Harold Stanton, layperson from Birmingham, Michigan, the Rev. Ted Halsted, pastor of Redford UMC and the Rev. John E. Harnish, staff member at GBHEM.

Roger says, “My first glimpse of a global vision was at Methodist-related DePauw University and then at Garrett where I met people from around the world. All of that, along with the experience of working in a predominately African American city and multi-racial congregation, prepared me for this position.” Working with bishops from Africa and Dr. Ken Yamada, staff member at GBHEM, they created a plan for a truly African university which would draw on the British, Belgian and French educational models being used in Africa at the time. Roger says, “The amazing thing is that almost 30 years later they are still using some of those initial outlines as the basis for the curriculum.”

The grand opening of Africa University took place in April, 1994, with several thousand celebrants from around the world including Robert Mugabe, president of Zimbabwe. Looking back on those times, Roger said, “It’s really incredible to think about all the behind-the-scenes negotiations and roadblocks we had to deal with. In one year, I made seven trips to Zimbabwe! That’s a lot of miles in the air!” One of the major challenges was working with the Zimbabwean government and President Mugabe to create the legislation which would enable the establishment of a private university. “Though Zimbabwe had state universities,” Roger remembers, “there were no laws or policies to guide private colleges. We had to work from scratch and now other denominations are moving forward with similar projects.”

For the record, the university in Zimbabwe was not the only new global educational initiative undertaken while Roger was at GBHEM. The first Methodist-related university in Argentina opened and after the fall of the Soviet Union new seminaries were created in Estonia and Russia. The International Association of Methodist-related Schools, Colleges and Universities, which Roger helped form, now includes institutions from more than 80 countries. “It was an exciting time”, Ireson said, “to be part of a global church living out John Wesley and Frances Asbury’s commitment to education.”

At the 20th Anniversary of Africa University, Ireson was awarded an honorary Doctor of Letters degree. With pride Roger said, “Even though I have received eight honorary degrees from Methodist-related institutions around the world, this one means the most to me.” In 1996 the classroom building for the Faculty of Agriculture, Natural Resources and Humanities was named the “Ireson/Kurewa Center” in honor of these two key figures who were central to the founding of the University. It created a pattern where every building includes the name of an African leader paired with an individual from outside the continent.

In September, 2019, Roger was given the Albert Nelson Marquis “Lifetime Achievement Award” in recognition of his global leadership in higher education and he continues as the Founding President Emeritus of the International Association of Methodist-related Schools, Colleges and Universities.

Reflecting on his work with Africa University, Roger says, “After all these years, Bishop Hartzell’s vision has come to pass, and we were privileged to be part of it. You can see God’s spirit has been at work. Thanks be to God!”