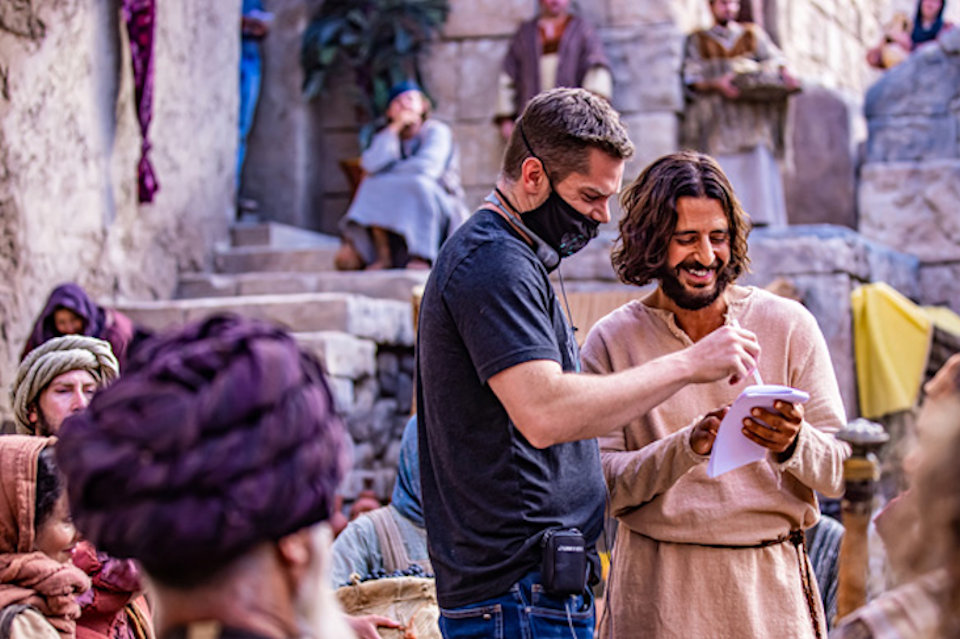 Director Dallas Jenkins (left) speaks to actor Jonathan Roumie on the set of “The Chosen,” a television series that portrays Jesus "through the eyes of those who met him.” The Rev. Chappell Temple of Christ United Methodist Church in Sugar Land, Texas, is doing an evening study based on the popular show. Photo courtesy of VidAngel.

Rev. C. Chappell Temple talks about his congregation’s experience with “The Chosen,” a TV program that invites viewers to glimpse Jesus through the eyes of those who knew him.

A United Methodist congregation in Sugar Land, TX, is gaining new insights into the Gospel stories of Jesus, thanks to an eight-week summer study series based on the popular TV program, “The Chosen.”

Created, directed, and co-written by American filmmaker Dallas Jenkins, “The Chosen” invites viewers to glimpse Jesus Christ through the eyes of those who knew him.

The Rev. C. Chappell Temple, lead pastor at Christ United Methodist Church, heard about “The Chosen” from a member who was excited about the series. Temple decided to check it out.

“We began watching and became intrigued with the quality and depth,” Temple said. “We have since become supporters of the project, which is crowdsource-funded, and have followed the series as it is unfolding.”

Now Temple and his colleagues are wrapping up an eight-week, Sunday-evening study of “The Chosen” (season one) as part of their regular discipleship programs that run concurrently with children’s and youth programming. While he has used some of the curriculum developed by “The Chosen” team, Temple primarily provides his own content to accompany viewing an episode and discussion.

“The response has been quite good,” he said, “with upward of 100 folks joining us in person for each session. The programs are held in our sanctuary, and the teaching content, along with a link to the episode, is also posted on our church’s website, so we also have many who are participating online later in the week.

“Overall, our folks have loved this study and are finding numerous insights into the gospel through it,” Temple added. “‘The Chosen’ is mostly filmed here in Texas. Our hill country is remarkably similar to the hill country in Israel,” where several Christ United Methodist members have taken part in study programs led by biblical scholar Jack Beck and held in conjunction with Jerusalem University College.

A pilot for “The Chosen” aired in 2017. The first season, introducing Jesus and the calling of his first disciples debuted in 2019. The second season launched on Easter Sunday 2021 and highlights the beginning of Jesus’ public ministry and what happens as word of his ministry begins to spread.

“What has struck me the most,” said member Jan Randolph, “is feeling like I’ve had a personal time with Jesus. The way things are portrayed draws you in so you feel like he’s calling you.”

Participant Etta Green agreed. “Every time I spend time with ‘The Chosen,’ combined with my memories of exploring Israel, reading and studying the Bible, and listening to faith leaders,” she said, “my faith becomes more alive for me. I believe I am understanding how to love better.”

Temple appreciates that “The Chosen” presents “a rather winsome and inviting picture of Jesus, along with humanizing the disciples and their lives,” he said. “It suggests that the problems people have today are not really all that different from those faced by the ones whom Christ called to ‘come and see.’”

He referenced the depiction of Nicodemus in season one. “The portrayal,” Temple said, “provides a fascinating window into the struggle that even ‘good, religious’ individuals may have in discovering what it really means to follow God, and it is a welcome corrective to the often-one-sided depiction of Pharisees as hypocrites. At the same time, the series has offered a clear sense of what the call to discipleship involves, both for those who walked with Jesus then and who walk with him now.”

Sidebar topics focus on such subjects as tax collecting in the first century, the meaning of Shabbat, Jesus’ relationship with children, the role of Andrew in the Gospels, the type of fishing that took place on the Sea of Galilee, wedding customs in Galilee, pawnshops in antiquity and the role of the Sanhedrin.

Temple noted that the 4,000-member Christ United Methodist Church is in what sociologists describe as the most diverse county in the United States. “Our congressional district,” he said, “is estimated to be one-fourth each Anglo, African American, Hispanic and Asian, with a large Indian population. The congregation reflects the community though it skews more Anglo.

“Although the other three pastors and I lean more traditional and orthodox,” he continued, “other staff members here are progressive, and the membership similarly falls into various theological and ecclesiological camps. The church finds its unity in mission and is extremely active in both local and global outreach programs, including an extensive prison ministry.”

Temple said he has found “The Chosen” to be both engrossing and encouraging, touching both intellectual and emotional levels.

“In providing background and context each week,” he explained, “I have emphasized that this is an example of ‘sanctified imagination’ that is clearly extra-biblical and yet, at least from my perspective, not out of accord with the biblical story. In places, the writers have used dramatic license clearly, speculating that Nicodemus visited in Capernaum, for instance, a possibility but nothing which any Scriptural text would lead us to conclude. The series departs slightly from what the Gospels would imply by moving the midnight conversation between the Teacher of Israel and the Messiah to a rooftop in Capernaum rather than in Jerusalem as John 2 and 3 would suggest.

“Likewise,” Temple added, “suggesting the backstories of several of the disciples takes us from the biblical texts into fictional filler, but again, nothing that is implied runs contrary to the Scriptural witness and what might have possibly been. Casting Matthew as an individual with Asperger’s syndrome, for instance, is a bold suggestion, but it is not inconsistent with his role as a tax collector, and it makes his character perhaps the most intriguing of all to me.”

The biggest benefit of the entire project, Temple said, is “to offer a portrayal of Jesus that is neither unduly weak nor overly stern but is instead almost inescapably attractive. It is for that reason that I am fully supportive of the series and hopeful that it will indeed, as its producers are hoping, reach millions all around the world.”

~ Click here to watch the movie trailer on YouTube and to find a link to a free viewing of Season 1/Episode 1. Free Google Play app available here for watching the series.