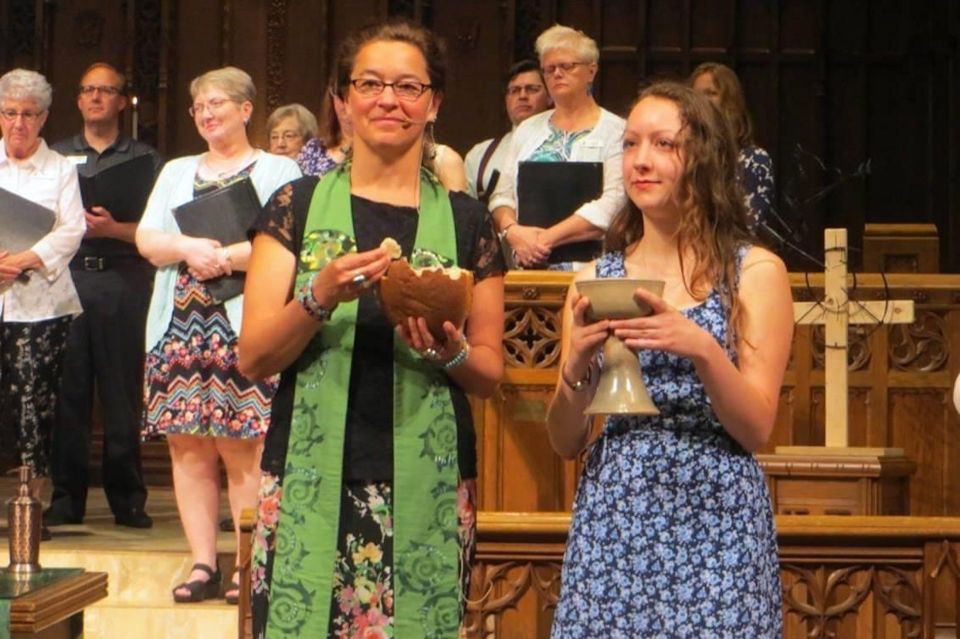 Audra Hudson (r) and her aunt the Rev. Julie Kline offer communion at First United Methodist Church of Kalamazoo, MI, in 2016. Julie was serving as Associate Pastor of the church at that time, and Audra was about to start two years of service in Tacoma, WA as a US-2. ~ photo courtesy Audra Hudson

Jan Kline thinks her late husband, the Rev. Ken Kline, is smiling broadly in heaven this month. Their daughter the Rev. Julie Kline now serves as the first female senior pastor at Kalamazoo First United Methodist Church. And their granddaughter Audra Hudson became the first female director at the Central Michigan University Wesley Foundation since the organization’s founding female chaplain some 100 years ago.

As the two women push through the proverbial “glass ceiling” that often seems to limit career advancement for women, they also connect back with their Methodist roots through their family tree. In his career, Ken served as a local pastor; campus chaplain at Ferris State, Central Michigan, and Western Michigan universities; and chaplain at Clark Retirement Community in Grand Rapids. He died in 1989 before Audra was born.

“My aunt has been a wonderful mentor and friend to help me discern my call,” Hudson said. “So many other members of the family also are encouraging and rooting for me. But it has been so special to have a family member who has been there, who is a woman in ministry, and can be honest about the challenges and the joys of ministry.”

A graduate of Michigan State University, Julie earned her masters of divinity from United Theological Seminary in Ohio and was ordained in the United Church of Christ. She has served at Kalamazoo First as associate pastor for the past 14 years. On July 1, she began her appointment as senior pastor at the same church.

“This is a unique appointment,” Kline said. “We don’t frequently move from associate to lead. The district superintendent and Bishop took some risk. Appointing the first woman to that pulpit and the risk to think that moving the associate to lead will be the best fit so this church will continue to be strong and vital.”

Being appointed as senior pastor during a pandemic also has created new challenges and possibilities.

“One of the things I hope we can grow into is becoming a church without boundaries,” Kline said. “This crisis in many ways has put us into a new perspective – how does the church function outside the church building? How does the church go to the people without being defined by the physical building?

“What would it look like if we created house churches like in ancient days in the book of Acts. That might create some stability during this time of crisis. Then, when we can gather back together again, we will have a stable presence.”

David Lundquist, a close friend of the Kline family since Ken’s appointment to the WMU Wesley Foundation in the mid-1970s, thinks Julie will provide inspirational leadership to the vibrant church. “Julie’s always thinking outside the box so we can stay fresh and new,” he said. “She has grown in her pastoral role. She’s been like a co-pastor. And that’s how she’ll approach teaming with our new associate, the Rev. Dr. Matt Weiler.” Also beginning his new appointment on July 1, Weiler most recently served at nearby Sunnyside United Methodist Church.

Both Julie and Audra continue to gain inspiration from Ken, who they each describe as a visionary. “My dad continues to be influential; he was a visionary,” Julie said. “He was legally blind, but he had eyes that others didn’t have. Who else could we touch and reach if we were bold enough? So, his fit in campus ministry was great because there you can do courageous things.”

Hudson agrees. “I’m carrying on a tradition,” she said. “(My grandfather’s) ministry was focused on justice and creating spaces for students to organize in the civil rights movement. He even received some discipline from folks who didn’t support him.”

The Rev. Scott Marsh, pastor at Coleman Faith United Methodist Church and board chair of the CMU Wesley Foundation, also sees Kline’s legacy continues. “I think Audra is very passionate around issues of justice. CMU Wesley has long had this as a tradition to help students come to a more educated understanding of issues of justice. I think Audra will continue that. She’s very much an advocate for environmental justice and racial justice. As we look to continue growing the future of the church, justice needs to be that primary focus so we can be relevant for the world.”

Another Methodist root both women acknowledge as a significant contributor to their faith formation is involvement in the United Methodist Church’s Global Mission Fellows program. Commonly referred to as the US-2 program, the General Board of Global Ministries places young adults ages 20-30 for two years in new contexts for mission experience and service. The program has a strong emphasis on faith and justice.

Both Hudson’s mother, Kathleen Kline-Hudson, and aunt went through the US-2 experience. “(The US-2 program) is a family affair or vein in our family,” Julie said. “For Audra to become a US-2 was not a great surprise. But we were delighted.“

After graduating from Kalamazoo College in 2016, Hudson headed to the far northwest as a US-2 community organizer at the Tacoma (WA) Community House.

“I coordinated community forums around immigrant justice, providing radical hospitality to mobilize around that,” she said. “I helped plan fundraisers and did advocacy with the legislature. It opened me to how many different ways justice works.

“As a community organizer, I was speaking to so many churches – but it was breadth work and not depth work. In campus ministry, I can journey deeper with a group for an extended period of time. I also realized in that work, even though I had a background as a cradle United Methodist, I needed more theological depth. I could do lay ministry without theological study, but I wanted to dive more deeply and have a theological grounding for faith-based community organizing and justice ministries.”

Upon the conclusion of her US-2 placement, Hudson moved to Garrett-Evangelical Theological Seminary as a member of the first cohort in a new degree program, master of arts in public ministry. “My concentration was on ecological regeneration – thinking about how issues of sustainability, environmental justice, and climate crisis impact us all, but particularly marginalized communities.

“I believe in young people,” Hudson said as she begins her work at CMU Wesley. “I don’t want to say they are the future of the church because they are here now. And as a young adult myself, they are vital to the life of the church, but they aren’t always given the proper care. They are hungry to know their Christian tradition and what it has to say about justice and love – a deep love that needs a commitment to our world for a common good and a transformation for healing and justice. I think that’s why Christ came. Young folks are looking for intentional learning and doing around this. Campus ministries are good places to discern how best to move forward, especially in a world that is suffering.

“Campus ministry is the laboratory of the church in many ways. Young people are hungry for this type of justice-informed ministry.  I’m excited to journey with students in thinking of our call to love one another fiercely and seek justice in our communities.”

While reaching to new positions and creating new spaces for people in Christian settings, both women express how they have been molded by those who came before them.

“My dad and mom were very influential in my decision to be a minister,” Julie said. “They both exemplified and role modeled that serving the world in the name of God can be done in a variety of ways. My mom was a social worker, and my dad a minister. We knew we needed to lift people up and look at everyone. All people are worth investing in. When we do those things, we make our communities much better.”

Kline sees the “lifting up” as a pillar of the Kalamazoo First congregation. “I am so excited to be part of a reconciling congregation,” she said. “My hope and a piece of my vision are that I want us to uncover and discover another layer of being in reconciling relationships. Another step is racial justice.”

Hudson also echoes her grandfather’s theme with college students. “When I say I’m called to justice ministries,” she said, “it goes beyond the family tradition and much more deeply a gospel tradition. Because that’s what God’s work in the world is – that’s what God’s love is. One very important element is that we have systems and relationships that honor each as God’s beloved. Unfortunately, our world isn’t set up that way. We need to see it as our Christian call to change that.”

Though Hudson never met her grandfather, her grandparents continue as a vital source of strength for her. Grandmother Jan just sent Audra a card reflecting that her grandfather is smiling for her new position.

“I’m living in the same parsonage where my grandfather lived when he was the pastor at CMU,” Hudson said. “I’m in this home where my mom grew up for part of her life, and my aunts and uncle grew up for part of their lives. I’m part of a legacy. There’s a spirit of my ancestors who have shaped me in my faith formation, and I’m continually reminded of that. I’m stepping into something larger than myself.”

~ Editor’s Note: Wesley at CMU and the other seven campus ministries across the Michigan Conference are currently engaged in a fundraising effort #withwesleymiumc. Their goal is to generate $20,000 in sustaining support. Interested in supporting student discipleship? Click here for more information and opportunity to contribute.