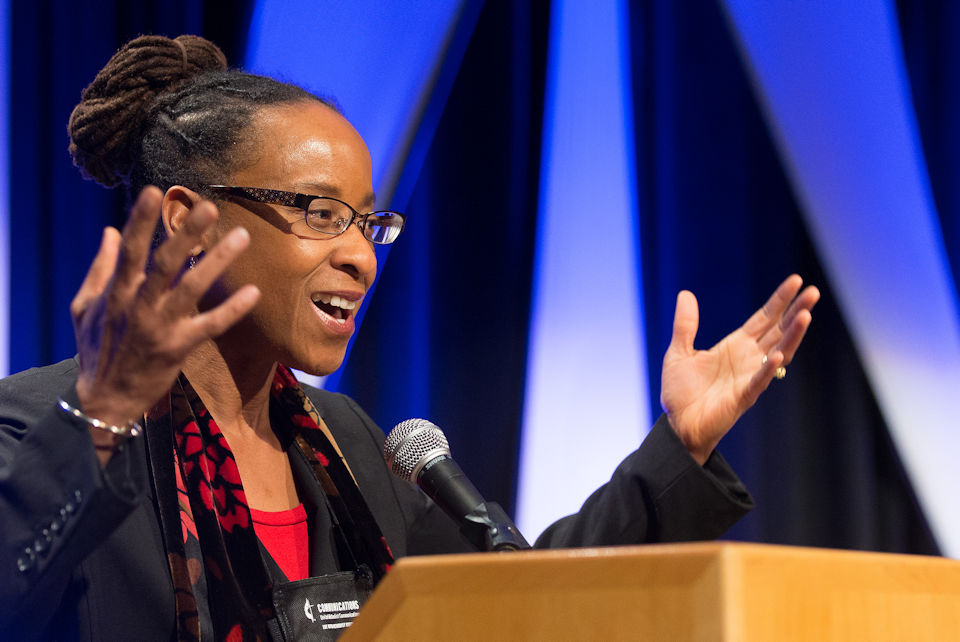 The Rev. Kennetha Bigham-Tsai addresses the Pre-General Conference Briefing in Portland, Ore., in 2016. Bigham-Tsai is chief connectional ministries officer for the United Methodist Connectional Table, which unanimously approved plans to host conversations around the globe about the church’s vision and mission. ~ UM News file photo/Mike DuBose

With General Conference now delayed to 2022, the Connectional Table hopes to bring more people into conversations that could help the denomination move forward.

The Connectional Table wants more United Methodists to have a place at the table.

On April 22, the denomination-wide leadership body unanimously approved a proposal to use the next year to host conversations around the globe about the future United Methodist Church.

“Is this an opportunity to see what is emerging, to see what new thing God might be doing?” asked the Rev. Kennetha Bigham-Tsai in introducing the proposal at the Connectional Table’s virtual meeting. She is the group’s chief connectional ministries officer.

The Connectional Table acts as a sort of international church council, coordinating mission and ministry across agencies and other church entities. The Book of Discipline, the denomination’s law book, also instructs the group to do its work by “listening to the expression of needs” and “addressing emerging issues.”

Bigham-Tsai acknowledged that The United Methodist Church is now facing a number of emerging issues that don’t lend themselves to the usual fixes.

“Is this an opportunity to see what is emerging, to see what new thing God might be doing?” ~ Kennetha Bigham-Tsai

After decades of conflict over the status of LGBTQ people, The United Methodist Church now faces multiple proposals to break up along theological lines, and plans already are underway for breakaway denominations.

General Conference, the denomination’s top lawmaking body, has final say about whether any separation plan is adopted. However, the COVID-19 pandemic has forced the global gathering to be postponed twice, with it now is scheduled for Aug. 29-Sept. 6, 2022 in Minneapolis.

During the delay, the Connectional Table plans to set up conversations where United Methodists from varied walks of life can meet to discuss the denomination’s identity, vision, connectionalism, and mission. The hope is to include people not usually heard at General Conference or big denominational gatherings.

The challenges the denomination faces require learning, not the leveraging of authority, Bigham-Tsai said.

“In other words, if we knew the answers, we would have deployed them by now,” she added.

The Connectional Table has the “Proposal for Conversation about Identity, Vision, Connectionalism, and Mission” on its website in English, French and Portuguese. Read press release

“We have a window now until the postponed General Conference, and I think it is a very good way to make constructive use of that time.” ~ Bishop Christian Alsted

Judi Kenaston, a Connectional Table member from West Virginia, told fellow members that the goal is for the conversations to enfranchise both General Conference delegates and other church members.

“What we are not planning to do at all is to try to write a vision plan on our own or try to write a strategic plan for the denomination,” Kenaston said. “We don’t want to focus this on developing new legislation, and we don’t want this to be a U.S.-centric conversation.”

In February, the group released a vision map titled “Out of Chaos, Creation: Imagining a Better Way of Being United Methodists.” The document, written with international feedback, calls on the denomination to be anti-racist and more global by decolonizing the denomination’s missional relationships and rejecting U.S.-centrism.

Among these guidelines is the statement that: “At the Lord’s table we meet eye-to-eye. Gathering at the table, we focus on what unites us across all borders: God’s infinite love and grace, revealed in Jesus Christ.”

“We don’t want to focus this on developing new legislation, and we don’t want this to be a U.S.-centric conversation.” ~ Judi Kenaston

However, the aim is to be more expansive than any slate of legislation.

“I think this is an important conversation that we will start around the church that I think will help us as we move forward. We have a window now until the postponed General Conference, and I think it is a very good way to make constructive use of that time.”

Bigham-Tsai said in a statement that she is praying that United Methodists around the connection “will join us around this table.”

“It is vitally important that we begin to clarify who we are and envision the future of our church together,” she said.