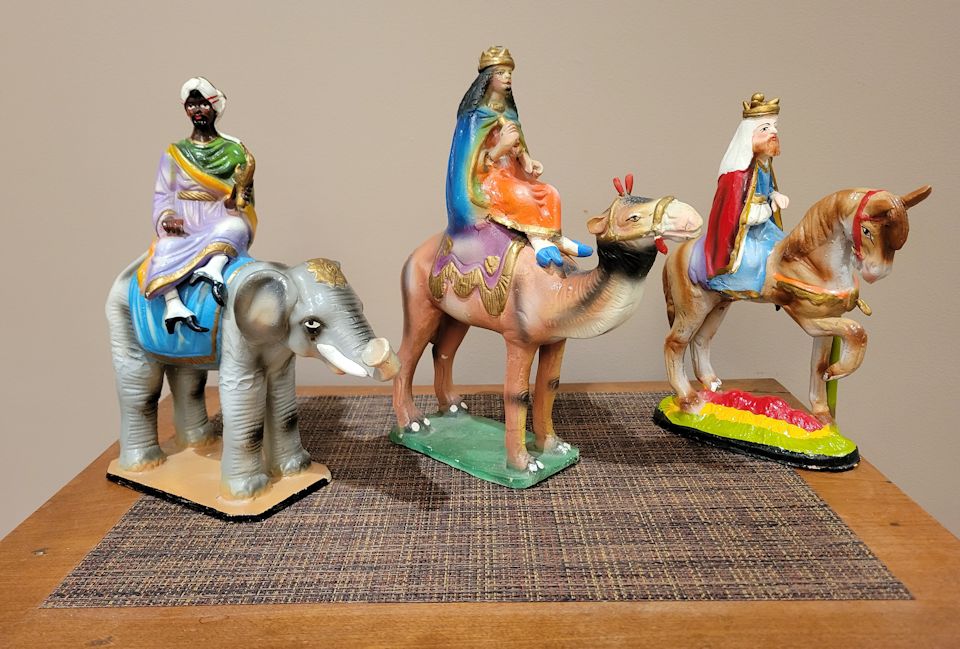 Traditional plaster figures from Mexico illustrate how the Magi are often portrayed as coming from three geographical and cultural areas — Africa, Asia, and Europe — referring to the three known continents at the time. ~ photo courtesy Kay DeMoss

Advent is a season full of traditions and experiences. Our journey to Christmas would not be the same without them. But how did they get started in the first place?

We know the stories in the Bible, attend Advent and Christmas Eve worship each year, listen to tons of Christmas carols, and have seen just about every Christmas movie and special. We United Methodists know a lot about Christmas, but like most things, there is always more to learn. Here are a few lesser-known tidbits.

John Wesley’s hymn-writing brother Charles wrote songs for the season from the very beginning. The first Methodist hymnbook, Hymns and Sacred Poems (1739) includes Charles’ “Hymn for Christmas-Day.” The song begins, “Hark how all the welkin rings, ‘Glory to the King of kings.'” Another Methodist preacher of his day, George Whitefield, would change the opening line to words we know much better, “Hark! the Herald Angel Sings.”

In a later publication, Hymns for the Nativity of our Lord, Wesley published 18 more hymns for the season. We still sing one of the songs in that collection, “Come, Thou Long-Expected Jesus.” The words in our United Methodist Hymnal today are almost exactly as Charles wrote them in 1745.

One wonders if Charles was the bigger fan of Christmas because his birthday is exactly a week before, December 18, 1707.

If you search for Christmas sermons by John Wesley, you won’t find any. He never published one.

One reason may be that when the Puritans rose to power in mid-1600s England, Christmas fell out of favor. Authorities passed laws attempting to prohibit the celebration of Christmas. On Christmas Eve, some towns even sent criers to call out, “No Christmas! No Christmas!”

It wasn’t until the mid-1800s, that Christmas had a resurgence in England. Queen Victoria and Prince Albert were of German background, and popularized the Christmas tree tradition in England. The popularity of Charles Dickens’ A Christmas Carol published in 1843 may also account for the holiday’s resurgence.

John Wesley’s Methodist movement began in England during those 200 years of Christmas suppression. As a result, there is no evidence they celebrated Christmas other than with a special worship service.

Many of the English emigrants to America at this time were also Puritans who were suspicious of Christmas celebrations. In 1600s Boston, they passed a law under which people were to be fined 5 shillings for not working on Christmas. It was not until 1870 that Christmas became a national holiday in the U.S.

Some speculate the Methodist preachers may have chosen to begin the founding conference of The Methodist Episcopal Church on Christmas Eve 1784 because they were all available. Methodists would later refer to that gathering as the Christmas Conference.

NATIVITIES ARE FILLED WITH SYMBOLISM

What our nativities lack in historical accuracy is often due to the inclusion of powerful symbolism. For example, the baby Jesus figurine sometimes has outstretched arms, despite the angels’ words to the shepherds that they would find him “swaddled and lying in a manger.” The open arms are a sign of welcome, an invitation to receive the salvation we know in Christ. Other elements like animals, trees, and wells also have symbolic significance. Read “Nativity scenes: More than meets the eye” to learn more about your nativity set.

Many United Methodists also participate in Las Posadas, a symbolic representation of the Nativity journey from the tradition of Latin American Christians. Each of the nine nights before Christmas, “commemorating the nine months Mary carried the infant Jesus in her womb and emphasizing his coming again,” explains The United Methodist Book of Worship, the people travel together to a home where a host family is prepared for a celebration. When the procession arrives, they knock on the door and follow a liturgy that uses Scripture to remind everyone of the one who offered Mary and Joseph a place to stay the night Jesus was born, and our need to welcome Jesus into our lives. After the liturgy there is a piñata and food.

It may surprise even those who have been Christians for years, to learn how little we know about the man who raised Jesus. Joseph is only mentioned in 16 verses in the Bible and none of his words are recorded. The Bible tells us only two things definitively. His dad’s name was Jacob, and he worked as a craftsman, probably a woodworker.

Everything else we know about Joseph, we infer from how he responds to the news that an angel visited Mary, his betrothed, and told her she will give birth to Jesus. This could not have been easy news to hear, but even in this moment, Joseph acts nobly and faithfully. He does all he can to protect his new family and follow God wherever he leads.

One of the roads Joseph and Mary are called to travel is one from Nazareth to Bethlehem where Jesus is born. The approximate 100-mile journey on foot, with possible help from a donkey, took an estimated nine or ten days. In a Get Your Spirit in Shape podcast episode, the Rev. Adam Hamilton shares the response he received from a mom who was nine months pregnant, “There’s no way Joseph was getting me on a donkey, if that was me!”

William Booth, a Methodist minister, started The Salvation Army in London in 1865. His passion for reaching the poor, homeless, and hungry with the gospel of Jesus Christ led him to open a mission to meet people’s physical needs. That mission continues to grow today.

Goodwill Industries is a similar organization with United Methodist ties. Methodist minister the Rev. Edgar J. Helms founded the organization in Boston in 1902. He hired and trained people in need of a job, to repair and resell donations he collected.