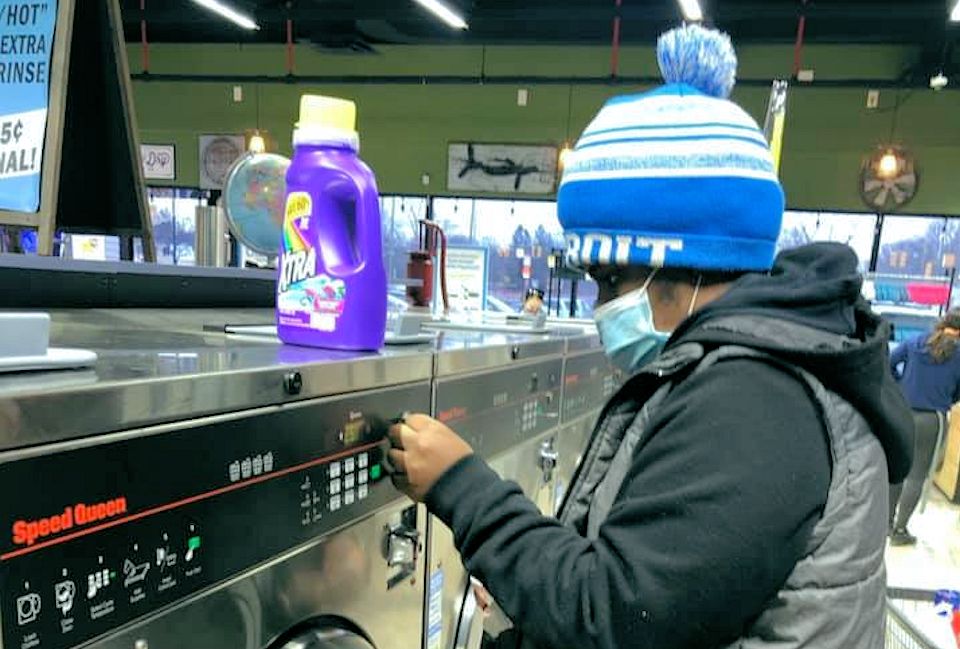 Hosted by two United Methodist congregations in a western community of Detroit, the Redford Brightmoor Initiative began with free stores and now serves many of their neighbors’ needs.

When a seed is planted and God aids the growth the gardener can give thanks for the harvest. In nine years since a ministry idea was planted, the Redford Brightmoor Initiative has blossomed on the northwest edge of Detroit into a vital ministry that is connecting church with community and helping neighbors meet real needs in the name of Christ.

In 2009 when the Rev. Jeff Nelson came to serve as pastor of the Aldersgate United Methodist Church in Redford, MI, he wanted to help the congregation establish a meaningful connection with the surrounding neighborhood.  The new ministry that Jeff and his congregation planted to connect with their neighbors was originally known as “Read, Seed, and Feed.” It was designed as a drop-in reading program that provided a snack and meeting opportunity for neighborhood elementary children and their families.

However, that attempt did not make the desired connections between the Brightmoor congregation and their neighbors. It missed the mark in meeting their immediate needs.

That first effort motivated church volunteers to take a road trip to Columbus, OH to learn about a thriving United Methodist community ministry in a similar neighborhood that was based around a free store. That Ohio free store ministry developed meaningful relationships by generously welcoming neighbors to meet their critical needs for clothing, food, and household goods donated by supporters and given away for free. Shopping that met primary needs of the cash-strapped and often hungry people in the area also provided space to grow trust and meaningful relationships between neighbors and church volunteers sharing a cup of coffee in the store.

That Ohio road trip to learn more about a successful neighborhood mission encouraged the Redford Aldersgate and West Outer Drive UMC congregations to try this new way for them to connect with their neighbors. The Redford Brightmoor Initiative (RBI) was launched in 2012 as a 501c3 non-profit organization that adopted the free store model as the initial way to connect in Christian love with neighbors in need. Both Redford Township and the immediately adjacent Brightmoor neighborhood are located northwest of downtown Detroit.

Brightmoor, a four-square-mile neighborhood on the edge of Detroit, was originally plotted in the 1920s with inexpensive housing for immigrants. Over the years, crime along with economic and population decline made Brightmoor one of the poorest neighborhoods in the country.

Since 2013, efforts to clean up trash and abandoned properties by organizations like Mitch Albom charities, the Detroit Rescue Mission, and the Detroit Blight Authority have created new hope, urban gardens, more livable homes, and recreational green space in Brightmoor. But the need for practical life-supporting ministry for many area residents remains.

RBI is a ministry hosted by Redford Aldersgate United Methodist Church and West Outer Drive UMC . The ministry began with free stores that operate in church space on both campuses.

The current director of RBI is Hilary Kristal. Kristal, a native of Detroit, received her college education at Wayne State University. Hilary taught overseas in Pusan, Korea, and Suzhou, China. Prior to that, she worked at a non-profit organization in Toronto, Ontario that offered support for the resettlement of Afghan refugees.

Hilary is glad to be back home in Michigan and is enthusiastic about the way RBI has been able to grow meaningful relationships with neighbors who also get involved in sharing their talents volunteering for the common good. The free stores still anchor RBI’s outreach but she also recognizes the blessings brought by the many ways RBI volunteers are extending ministry beyond the free stores to help meet basic human needs through other programs such as its emergency food pantries, the lunch program, a visiting nurse, a volunteer car mechanic, a community garden, a computer lab, a computer club for kids, a diaper bank, school supplies, and a furniture and appliance ministry. RBI partners with a local laundromat to offer up to $10 of free washing for neighbors on the second Wednesday of each month.

A mobile dental team serves the RBI ministry twice a year. RBI also hosts several mission teams each year who travel to Brightmoor from around the country to help with hands-on mission projects for the improvement of the neighborhood.

RBI depends on volunteers, the faithful and generous support from the host congregation, and many partnering Michigan United Methodist congregations.

The current senior pastor of Redford Aldersgate UMC, the Rev. Ben Bower, is President of the RBI Board of Directors. The  Rev. Nadine Johnson who primarily serves as pastor for the Brightmoor campus is a valued participant in the ministry. Hilary is especially grateful for the leadership and generous financial support from Birmingham First UMC that has been vital to RBI since its founding in 2012. She also is thankful to the many United Methodist Churches as well as individual donors who contribute to the ongoing support of the ministry. She is grateful for other volunteers such as area Boy Scout troops for their valued service. Hilary She notes that RBI has been able to provide assistance to 4,000 families since 2012.

Hilary mentions what a blessing the part-time volunteer auto mechanic has been. She says, “People who are cash-strapped and live in an area without reliable public transportation need functioning cars and can’t afford to keep them repaired. Their lives are crippled when their cars are sidelined by mechanical failure.” Hilary hopes to secure grants to expand this program. She also explains that a much-needed and thriving ministry of receiving and sharing donated furniture and appliances is currently hampered because RBI is in need of a storage space for donations and a truck to deliver them to needy residents.

Hilary Kristal is proud of the way RBI has continued to offer essential services even when the coronavirus pandemic forced the cancellation of the popular lunch program and indoor shopping at the free stores. Hilary noted, “We quickly pivoted with the circumstances and transformed the lunch program into carry-away lunches. We never missed a shopping day as the free stores moved outside into the church parking lots. Even in inclement weather, we continued to serve our neighbors.”

The Redford-Brightmoor Initiative has blossomed from its initial planting into life-giving outreach that is growing community for Christ.  The fruits of this significant healing tree are being shared and changing lives.

Hilary Kristal can be contacted for more information about how to get involved with this ministry and/or to arrange for her to speak about RBI at your church or group at  director@redfordbrightmoorinitiative.org.

~ Redford Brightmoor Initiative is an EngageMI ministry partner of The Michigan Conference.  Tax-deductible charitable donations to this ministry can be made online at https://rbidetroit.org/support-us/donate/