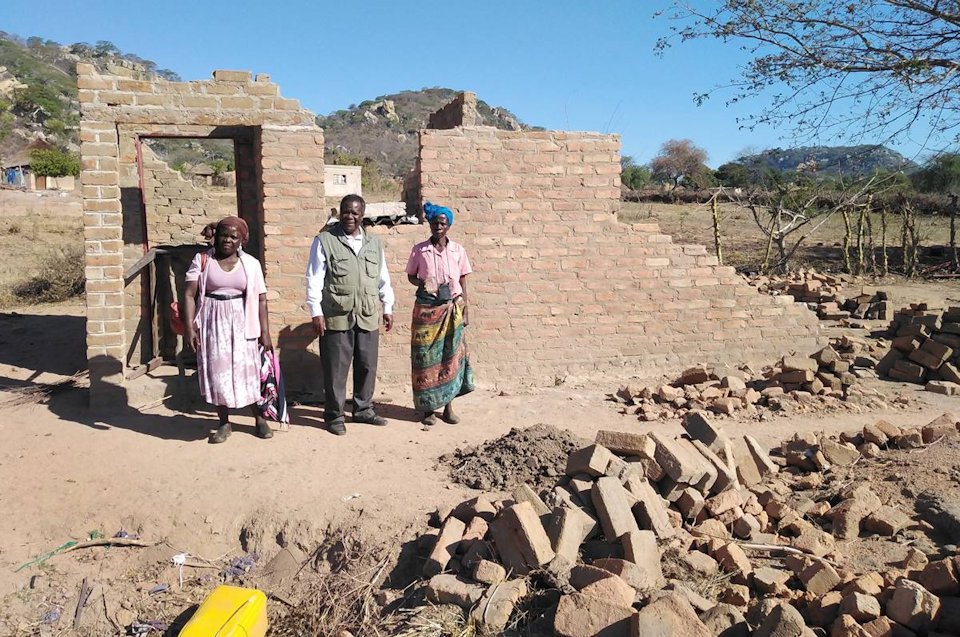 Vivian Chigweshe, right, stands in front of her home, which was destroyed by Cyclone Idai in March. She is among the survivors who will have a new house built with support from The United Methodist Church. Standing from left are lay leader Chirobwe Kupeti and the Rev. Jairos Mafondokoto, Masvingo District superintendent. ~ UM News/Chenayi Kumuterera

The most significant Christmas gifts don’t fit in a box. Please give to Bishop David Bard’s appeal for Disaster Recovery. Your gift will be the gift of new life.

November 6, 2019 | ZIMBABWE — United Methodists have rallied to help survivors of Cyclone Idai, continuing to provide aid for Zimbabwe’s affected families in the eastern districts of Manicaland and Masvingo.

The destructive March 15 cyclone-affected more than 250,000 people in the Chimanimani, Chipinge, Mutare, Buhera, Bikita, Zaka, Gutu and Chirumanzu districts with an estimated 340 people killed and more than 250 more reported missing, according to ReliefWeb.

Church leaders and survivors said they have been overwhelmed with the kind gesture of support from various partners in their time of need.

A $50,000 grant from the Baltimore-Washington Conference went toward infrastructural development, ensuring the construction of five new homes for families whose houses were destroyed by Cyclone Idai in the Bikita District. The funds were originally earmarked for a pastors’ school program but were redirected to Cyclone Idai aid.

Morgan Jeranyama, a humanitarian relief consultant who was hired by the church in Zimbabwe, said the support was essential.

“I undertook a trip to assess the request and verify the needs of targeted beneficiaries. Of the visited families, after the assessment, it is clear that these are genuine cases of need that deserve assistance,” he said.

“It was a kind gesture that this was approved,” he said.

Charlie Moore, project coordinator for Baltimore-Washington, said the partnership between the two conferences spans 20-plus years.

“One of the key components of this partnership has been sponsoring the pastors’ school that is held every two years at Africa University,” he explained. “In response to the humanitarian crisis that evolved from Cyclone Idai, Bishop Easterling and the Baltimore-Washington Conference leadership team … discussed the possibility of reallocating these budgeted funds … to cyclone relief.”

Moore said he facilitated communication with the Rev. Alan Masimba Gurupira, assistant to the bishop, who kept the conference informed about how the funds were allocated.

“Some of the initial funds were used to purchase three motorbikes for pastors in the affected areas of Ngangu in Chimanimani District,” Moore said.

The bishop also noted a strong partnership between the Zimbabwe Episcopal Area and the Western Pennsylvania Conference. The conference donated $18,000 for medicine that was sent to United Methodist Mutambara Mission Hospital, said Gurupira.

He said the episcopal area also has been in contact with the United Methodist Committee on Relief and has filed the required paperwork for additional assistance. In March, the relief agency allocated three $10,000 grants for immediate, emergency short-term funding to meet basic human needs in Zimbabwe, Mozambique and Malawi.

The church’s support has been greatly appreciated by survivors of the storm, some of whom shared their stories with UM News.

“Disaster struck when I was in the hospital,” said Elizabeth Watira, a mother who is pregnant with her fourth child. “The kitchen collapsed when there were children sleeping in it. Luckily, they escaped unhurt,” she said.

“After the collapse of the two structures (we) called home, my husband has never visited us. We have been sleeping at neighbors’ places until we had to go back and sleep in the destroyed structures,” Watira said.

The church is helping to build a new three-bedroom house for the Watira family.

Grandmother Vivian Chigweshe is sharing a damaged home with her two sons and two granddaughters.

“I have a kitchen only. The two-bedroom house we shared collapsed. Currently, my sons sleep in the kitchen and myself together with two young girls share a half-built, two-room structure we are trying to build,” Chigweshe said.

Jeranyama expressed concern about the safety of these families.

“Two roofing sheets have been hanged to provide the only cover. A piece of cloth is used to cover the door entrance,” he said regarding Chigweshe’s situation. “This is scary in an area where prowling hyenas are reported to be common.

“However, I am happy that two local builders who attend Chirorwe United Methodist Church are willing to assist by rebuilding houses as volunteers. This can be used as the basis for a community assistance initiative that can bring in wider community self-help support for the reconstruction efforts,” he said.

He said incentives could be considered where necessary to motivate community members willing to assist in the reconstruction project.

“This can be monetary or material rewards for those community members who will help the survivors in mobilizing local resources, e.g. crushing stones, carrying river sand and pit sand,” he said.

With assistance from the Baltimore-Washington Conference, Nhiwatiwa said, the church in Zimbabwe is making a difference in the lives of survivors.

“We were able to have a really big hand in a humanitarian sense of helping the affected people. We did not only manage to provide food and other needs, but those funds are going to be channeled to build some shelter houses to help those people who were left without any shelter at all … We are so thankful with that partnership,” he said.