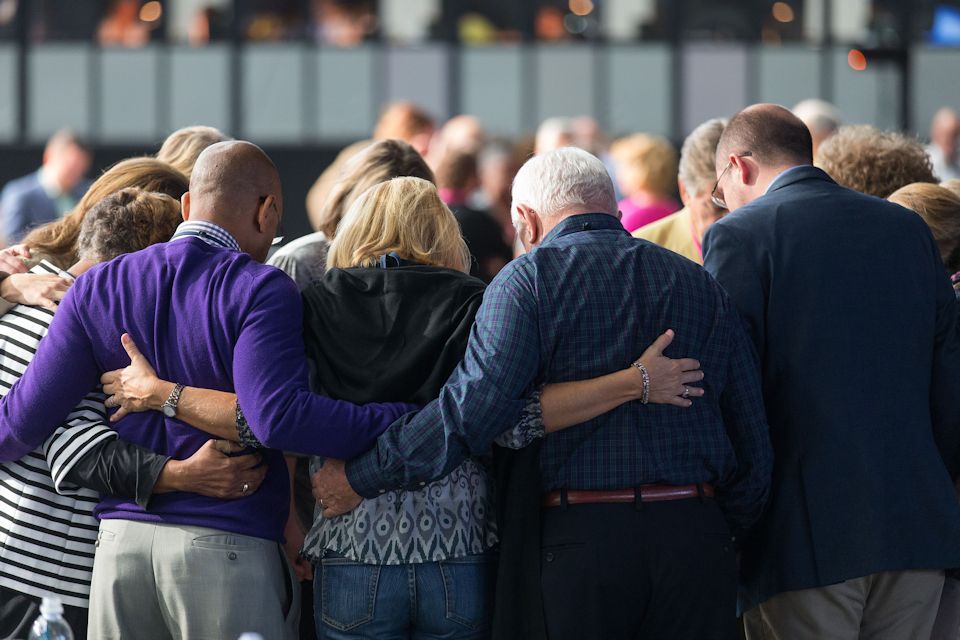 A moment of prayer during a contentious session of the 2016 General Conference in Portland,OR. ~ umns photo/Mike DuBose

The Rev. Dr. Charles Boayue, Jr., considers the possible schism in the denomination and concludes the best outcome is, “holding on to the hand of Jesus Christ.”

The 2020 General Conference should have been held in Minneapolis, MN in May 2020. But due to the coronavirus pandemic, it is still pending. There are significant questions about whether it can be held in August 2022, as presently scheduled, because of uncertainties the Omicron variant has brought.

In the meantime, there is emerging consensus that The United Methodist Church is going to split at the next General Conference, if not prior to it. This emerging consensus bothered me for many years. I did not want to see the United Methodist Church split. Some might say that I have been naïve, and they may have a point. However, naiveté is not always wrong. I want a unified Church. I want a strong Church. I want a Church that conveys the unity of the Holy Spirit. I want a global Church. I want a Church that reflects the diversity of the world while at the same time offering individuals hope, salvation, and justice.

I have been a General Conference delegate each quadrennium since 1996. I have been there for the past 24 years and witnessed the makings of what we now face. I was in Portland, OR in 2016 when the General Conference authorized the Commission on A Way Forward to help our Church find its way into the future. I was there in 2019 at the special called session of the General Conference when the “traditional plan” was approved instead of the One Church Plan which was the recommendation of the Commission. I saw the hurt, anguish, and pain of fellow progressive United Methodist clergy and laypersons who could not accept continuing ostracism of our LGBTQIA+ siblings. I saw them ask for consideration. I heard them plead for space to be part of a church that would allow differences of opinion and conviction on ordination and marriage for same-sex persons. I spoke with some of them and found myself wondering how I could help find a way forward.

“As our Church moves toward the next General Conference, regardless of when it might be held, I pray that we go there more humble than haughty, more compassionate than cantankerous, more open than hard-hearted, more receptive to the movement of God’s Holy Spirit than captive to our own opinions and personal agendas.”

Also, I saw the determination of fellow traditional United Methodist clergy and laypersons who believed that the Church should never allow same-sex marriage and the ordination of homosexuals. I saw, heard, and observed several of our fellow traditionalists dismiss the pleas of their progressive siblings. I observed how the majority too often moves to a vote instead of listening and considering the hurt of others. While Robert’s Rules of Order offer great parliamentary processes for decision-making, I think we fail to be the best we could be when we hide behind parliamentary maneuvers to disallow the hopes and aspirations of others. For those who have experienced racism, sexism, and other forms of dehumanization, the denial of people’s aspirations is a nagging misery. I left the special session of the General Conference in St. Louis, MO troubled at heart.

I have come to the belief that God’s grace will abound at the next General Conference regardless of what we do. The Church is of God and God will preserve it to the end of the age. We may have schism because we do not know how to avoid it, but God will have the final word.

After schism, then what? I believe that all future expressions of United Methodism emanating from the pending General Conference will likely end up approximately in the same place: holding on to the hand of Jesus Christ. Because we are one family, nothing we decide will ever separate us from the love of God. I hope progressives, traditionalists, liberationists, and all other groups of United Methodists will follow Jesus and offer salvation in His name to the world. Once we do this, despite our physical and theological separation, we will remain one in spirit and in truth. This is my hope for the Church and for its mission in the world.

As important and consequential as the next General Conference is, I have come to believe that taking the name of Jesus with us is far more important than the denominations that will form because of schism in the United Methodist Church. To God be the glory!