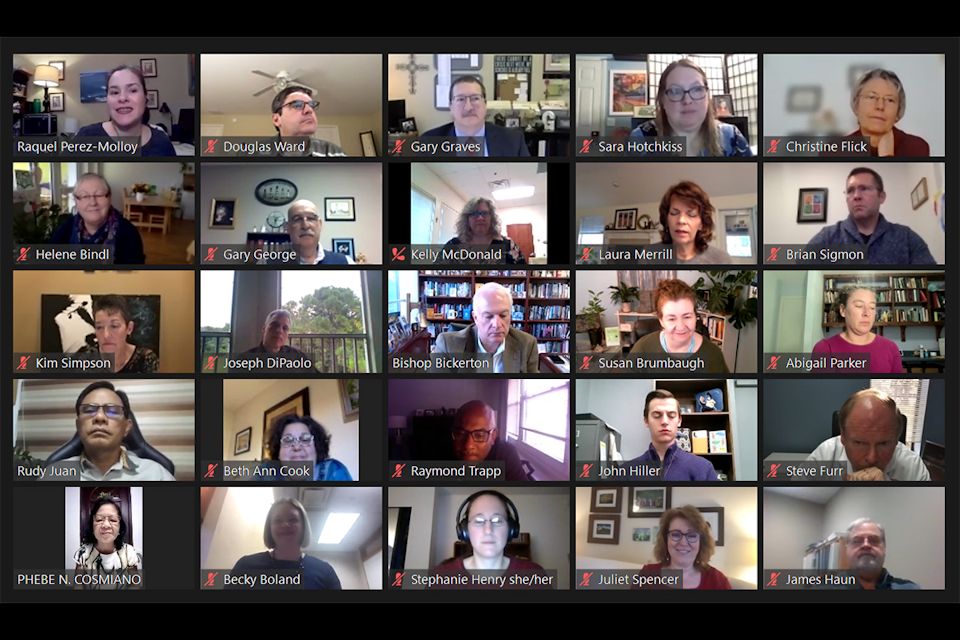 At a Nov. 18 online meeting, the Commission on the General Conference and staff pressed forward with planning for the postponed legislative assembly. Members expect to make a final decision in the first quarter of next year on whether General Conference can take place as scheduled August 29-September 6 in Minneapolis. ~ UM News screenshot via Zoom

Planners of the next General Conference stick to the goal of holding this pivotal legislative assembly in person with delegates from around the globe. Inclusion and health are top values.

Organizers are pressing forward with plans to hold what many expect to be a pivotal General Conference next year.

At the same time, they acknowledge that the pandemic may once again thwart those plans.

The Commission on the General Conference aims to decide in the first three months of next year whether The United Methodist Church’s top legislative assembly can go ahead as scheduled Aug. 29-Sept. 6 in Minneapolis.

In the meantime, the international elected body met online Nov. 18 to continue preparations. Commission members also unanimously approved a list of values that will guide their decision to go forward or delay once again.

The main obstacles to General Conference remain the availability of travel visas and vaccines.

The coronavirus already has twice forced postponements of the assembly originally set for May 2020. The bishops also found it impossible to hold a special one-day virtual General Conference earlier this year.

Kim Simpson, the commission’s chair and a veteran delegate from the Central Texas Conference, urged fellow members to make clear that the event will be “as inclusive as possible.”

“It will not be just U.S. delegates,” she stressed. “We as a commission are the ones that make the decision, so we as a commission need to make sure that we allay the fears that are out there.”

General Conference is the only body that can officially speak for the church. The coming gathering has 862 voting delegates — 55.9% come from the U.S., 32% from Africa, 6% from the Philippines, 4.6% from Europe, and the remainder from concordat churches that have close ties to The United Methodist Church. Half of those delegates are lay and half are clergy.

Bishops from around the globe as well as interpreters and other staff also play key roles in the proceedings. Bishops preside but do not have a vote.

It’s possible to have a quorum with just U.S. delegates, but commission members and General Conference staff agreed that is not good enough.

“The fact that we are an inclusive church means that we should be working tirelessly for getting as many people there as is possible — and not being content with just receiving the quorum,” said the New York Conference’s Bishop Thomas Bickerton, the Council of Bishops representative on the commission.

While the timing of General Conference remains a question mark, no one questions that the coming assembly will likely mark some kind of turning point.

After decades of intensifying debate over the status of LGBTQ people in the denomination, the coming General Conference faces multiple proposals to divide the global denomination along theological lines. All were drafted before COVID-19 became a household word.

The most endorsed of these proposals is the Protocol of Reconciliation and Grace Through Separation. If adopted, the protocol would allow traditionalist churches and conferences (those that support restrictions on gay marriage and ordination) to leave with church property and $25 million to start a new denomination. The proposal also sets aside $2 million for other groups of churches that might leave.

With the importance of this General Conference in mind, the commission approved the following values for consideration:

Marie Kuch-Stanovsky of the Pacific Northwest Conference added to the value of inclusion that the commission should consider the participation of young-adult delegates. The Rev. Beth Ann Cook of the Indiana Conference also reemphasized the value of not using only U.S. delegates to reach a quorum.

Commission members briefly debated whether it’s possible to hold a hybrid General Conference where most delegates meet in person while others meet online.

Last year, the commission named a technology study team to look into the possibilities of holding General Conference online. The team’s report outlined several obstacles in the way of such a conference.

Those hurdles include the multiple time zones between delegates who live in the Philippines and the U.S., the inequity of internet availability and the difficulty in safeguarding voting. After the special General Conference in 2019, the commission found evidence of four ineligible people casting votes using the credentials of delegates who were not present.

The Rev. Joe DiPaolo, a commission member from the Eastern Pennsylvania Conference, urged the commission not to completely rule out the possibility of holding a hybrid General Conference.

“Technology has been evolving,” he said.

He also pointed out that the African Methodist Episcopal Church held a hybrid General Conference earlier this year with most delegates meeting in Orlando, FL, and African delegates joining online.

The AME meeting lasted four days compared to the United Methodist General Conference’s nine-day schedule. The AME gathering also did not have delegates from as many countries as elected to the United Methodist gathering, nor were the AME delegates considering a denominational separation. The AME gathering did agree to begin a discernment process on the status of LGBTQ people in the denomination.

“I just think about the practical fact that legislative committees are already hard in person,” said the Rev. Laura Merrill, a commission member from the Rio Texas Conference. “It is really hard in person to make sure everyone is included in the conversation. … In this case, how does it work to have a delegation in one place when they’re on six different legislative committees?”

The Rev. Mujinga Kashala, the commission’s vice chair, said through an interpreter that internet connectivity remains a big challenge in her country of Congo.

“For instance, I missed the executive committee because, again, I had connectivity problems,” she said. “Sometimes we can connect for a little while but then we are cut off again.”

Ultimately, DiPaolo agreed that the commission “is working to try to have as much full participation in an in-person conference as possible.”

Bickerton said that the values the group adopted set “a very high bar.”

“I think the embracing of these values signals to the whole church that this commission is taking this work very seriously.”

The group next plans to meet in January, but it may take more than one meeting to decide whether the 2022 General Conference is a go.