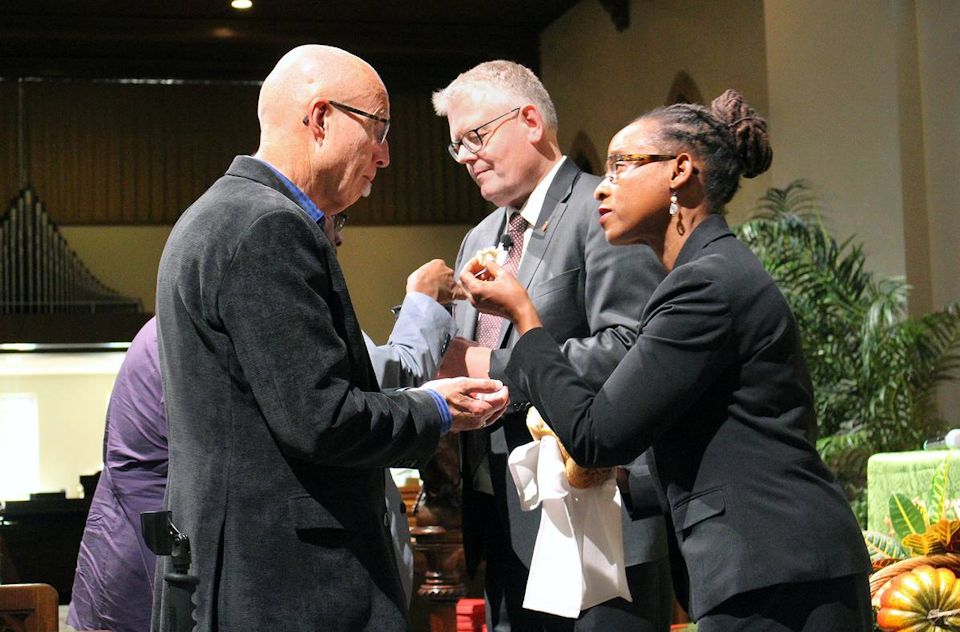 The Connectional Table hopes to restructure with a  goal is to become a body that serves the whole church rather than certain constituencies.

The United Methodist leadership body that coordinates the denomination’s mission and ministry is looking to become both smaller and more global.

Bottom line: The Connectional Table plans to have fewer seats at its table but a more diverse group of people in those seats.

“There’s a need for a strategic, holistic focus on the whole church — rather than members coming together to represent their own constituencies,” said the Rev. Amy Coles, co-leader of the group’s Membership Makeup Task Force.

Coles presented the task force’s initial proposal for a new structure at the Connectional Table’s online meeting Nov. 17. While the group’s members supported the proposal’s overall goal, many had some changes to suggest.

The task force plans to bring a refined version of its proposal to the Connectional Table’s next meeting in February.

The Connectional Table is focusing on changes to better serve the whole denomination even as leaders expect a coming separation along theological lines.

“We are laying the groundwork for the church as we move into the future.” ~ the Rev. Kennetha Bigham-Tsai

Nordic-Baltic Area Bishop Christian Alsted — Connectional Table chair — referenced the denomination’s internal strife in his opening devotion based on Romans 12:9-17. “I think this is a time to bless each other,” he preached.

The Rev. Kennetha Bigham-Tsai, the group’s chief connectional ministries officer, told United Methodist News that the Connectional Table’s goal is to create a more nimble body that is more representative of a denomination that stretches across four continents.

The group also hopes to focus more on the denomination’s vision and mission.

“We are laying the groundwork for the church as we move into the future,” Bigham-Tsai said.

The proposal removes presidents of general agencies from membership. Most of those presidents are bishops. It also makes other changes.

At present, the Connectional Table has 21 members elected by the five U.S. jurisdictions and seven elected by central conferences — one each from the church regions in Africa, Europe, and the Philippines.

Under the proposal, the four continents where the church is present would each send five voting members.

The proposal calls for these members with voice but not vote:

“At a minimum, this proposal increases the voting members coming from outside the U.S. to 18 voting members,” said Coles, who is also assistant to the bishop in the Western North Carolina Conference.

The proposal is still a work in progress. Connectional Table members discussed the possible new structure in an introductory session and in small groups. They then brought suggested changes to the wider body.

One suggested change would have the U.S. and Africa each send seven members, with the Philippines and Europe each sending three. Proponents of the change see it as better reflecting the balance of the denomination’s membership.

Another suggestion would keep the two executives who have a vote but also add the 11 other top agency executives with voice but not vote. The idea here is that nonvoting members would serve as resources when called upon by Connectional Table members.

Across the Connectional Table, members have expressed concern about the reduced representation from ethnic caucuses. Currently, each of the five U.S.-based ethnic caucuses has a voting member.

Coles told the group that the task force extensively discussed the issue of representation, coming to a consensus that representation of every group is not possible in a denomination of more than 12 million members.

She also noted that the proposal is in line with legislation already submitted by the Connectional Table to create a U.S. regional conference as well as the Christmas Covenant legislation, which expands regionalization to every continent. Both legislative proposals encourage more decision-making and diverse representation at the regional level. The Connectional Table also has endorsed the Christmas Covenant.

The Rev. Jerry DeVine, a Connectional Table member and district superintendent in the Michigan Conference, told UM News that the proposal will require a culture shift from representation of “my group” to a commitment to the whole.

The 2004 General Conference created the Connectional Table to be a visioning body for the denomination. The Book of Discipline, the denomination’s policy book, says the Connectional Table is to serve as “steward of the vision and resources for mission and ministry, provide fiscal responsibility, and establish policies and procedures to carry out the mission of the church.”

The leadership body coordinates ministries among the denomination’s general agencies, works with the General Council on Finance and Administration to develop a denomination-wide budget, and strives to tackle emerging issues. For example, the Connectional Table is working with the Council of Bishops and other ministries to promote global equity in COVID-19 vaccine distribution.

Since the Connectional Table’s formation, the preponderance of its members have come from the United States even as the church’s membership has grown more international. The denomination has seen most of its growth in Africa.

Any change to the Connectional Table’s makeup requires the approval of General Conference, the denomination’s top lawmaking assembly.

The Connectional Table hopes to bring its proposed new structure as legislation to the postponed General Conference, now scheduled for Aug. 29-Sept. 6, 2022, in Minneapolis.

However, General Conference organizers are not taking any additional legislation to the coming assembly, twice delayed by the pandemic.

Alsted told the group there may still be a way to get the new legislation before delegates.

“But, of course, there is no guarantee that it will get anywhere,” Alsted said. “But that is our avenue into the General Conference.”