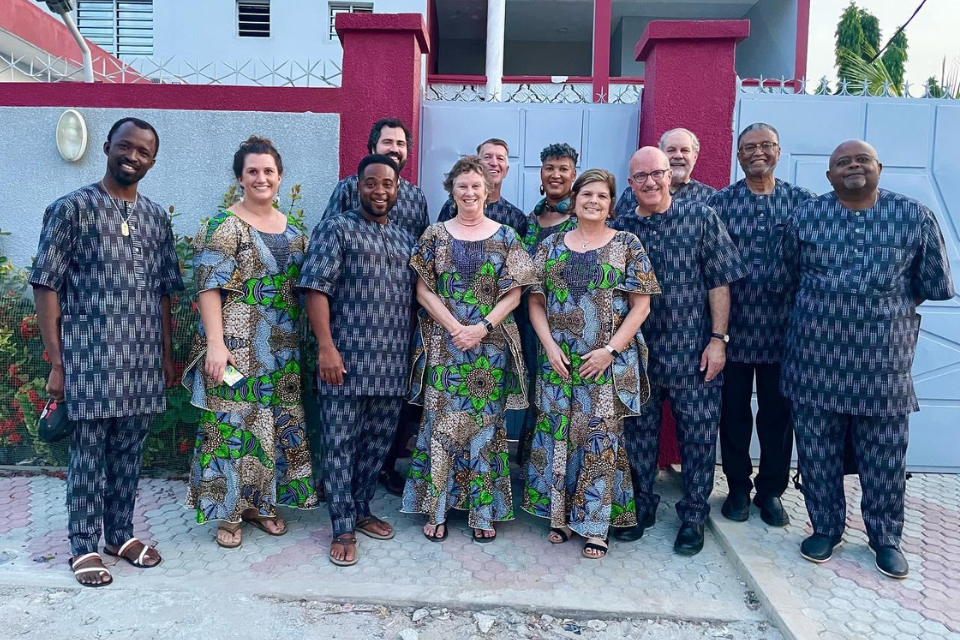 In November 2022, two Michigan United Methodist clergy joined a team of scholars on a trip of a lifetime to Benin to face the harsh truths of the transatlantic slave trade documented in a recently discovered abolitionist’s journal.

There it was. A forgotten journal discovered in a forgotten box tucked away in the back of a dusty closet. When the librarian at United Methodist-affiliated Adrian College found it, she called Rev. Chris Momany, chaplain and faculty member, because she knew of his interest in the abolitionist history of the college.

The little handwritten book dating from 1839-41 was the journal of David Ingraham, a student and protégé of Adrian’s founder, Rev. Asa Mahan. Almost 200 years later, that forgotten journal led to an unforgettable trip for Rev. Momany, now the pastor at First United Methodist Church in Dowagiac, MI, and a team of scholars.

In the early 1800s, David Ingraham was one of Mahan’s students at Lane Seminary in Southern Ohio. At Lane, some outspoken abolitionists argued that “persons are to be treated according to their intrinsic worth irrespective of color, shape, condition or what not.” An advocate of this doctrine, Mahan was clearly in line with John Wesley, who referred to American slavery as the vilest form of slavery ever to see the sun.

Mahan would carry his abolitionist beliefs with him to Oberlin College when he became its first president. Twenty years later, in 1859, Mahan came to Michigan to be Adrian College’s president with the same commitment to the intrinsic worth of all. It is assumed he brought the Ingraham journal with him.

The significance of the journal comes from Ingraham’s notes about the Ulysses. This slave ship was impounded by the British in Jamaica in 1839 because slavery had been outlawed in the British Empire in 1833. The freed slaves, many of whom were natives of Benin, settled in Jamaica.

The Unforgettable Trip to Benin

With the discovery of the journal, Rev. Momany began researching the ship with the idea of visiting Jamaica to see if he could locate descendants of the freed slaves. But instead, he and Dr. Doug Strong, a professor at Seattle Pacific University, formed a team to travel to Benin.

The team included Liz Momany, Chris’ spouse, and Michigan United Methodist clergy Rev. Joy Jittaun Moore, former chaplain at Adrian College and professor at Luther Seminary in Minnesota. In November 2022, they made their pilgrimage to West Africa. The team of 12 scholars from various disciplines and Wesleyan denominations forming a Dialogue on Race and Faith was supported by a grant from M.J. Murdock Charitable Trust, The Maclellan Foundation, and Seattle Pacific University.

One of the trip’s highlights was visiting the traditional center of the Dahomey kingdom, the ancient name for what is now Benin and the setting for the recent movie The Woman King.

Another significant site was the harbor at Ouidah, where over a million kidnapped people were loaded onto ships to be transported to the Americas. From the marketplace where human beings were bought and sold, the enslaved were marched three miles to the coast, then packed onto the crowded ships, never to see their homeland again.

Rev. Moore, who is African American, reflected on this powerful experience: “It was an emotional moment to stand where my ancestors had stood—at the point of no return—and to say to my ancestors, ‘I have returned, and I am free.’” Rev. Momany added, “It was so overwhelming to be in that place of horror and feel the weight of the history.”

In a day when the conversation about race is frequently shaped by political biases and framed in sound bites to hide some of the ugly truth, said Rev. Momany, “we need to walk through what actually happened in order to talk about where we need to go.” Rev. Moore expressed the same sentiment when she said, “We have to honestly face the past in order to change the future.” The team is currently preparing a book that will detail their research (the working title is A Prophetic Past: Abolitionist Christians Modeling Racial Justice).

For Michigan United Methodists, the story of Asa Mahan and David Ingraham’s forgotten journal connects our past with our present-day commitment to racial justice and human rights. It challenges us to treat each person with dignity based on their “intrinsic worth irrespective of color, shape, condition or what not.” It is a belief that is still held at Adrian College, and it is mirrored in our Social Principles, which call for United Methodists to “recognize racism as sin and affirm the ultimate and temporal worth of all persons” (¶162.A).

Going back to the journal which inspired the trip, Rev. Momany said, “To sit in a college library basement and hold in your hands a small, 200-year-old journal with the handsketched description of a crowded slave ship, then to stand in the harbor where it departed . . . well, then you can’t deny the history or its lessons for the present and the future.”