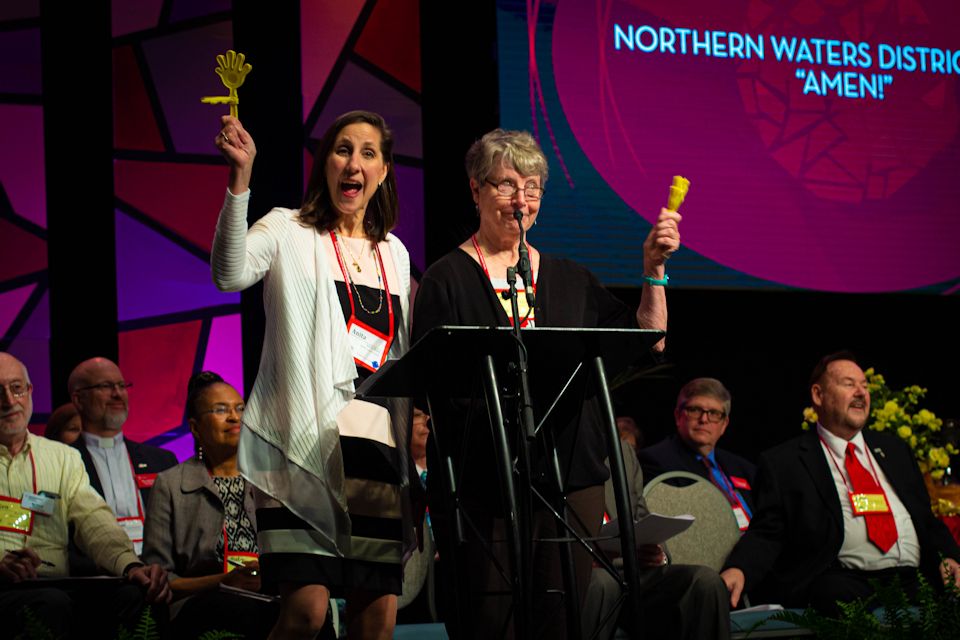 A light-hearted moment during the "fixing" of the appointments at the 2019 Michigan Annual Conference. Superintendent Anita Hahn and Lay Leader Anne Soles bring news from the Northern Waters District. ~ mic photo/Jonathan Trites

The Rev. John Harnish talks about his experience as an ordained elder and shares six trends in the United Methodist appointive system emerging over the past 50 years.

I was ordained as a Deacon in 1971, received my first appointment in 1972, and was ordained as an Elder in 1973. Time really does fly when you are having fun! My 50 years may not be all that significant in the grand scheme of Methodist history, but it does give me a bit of a perspective on Methodist itineracy. Though several excellent books have been written on the subject, here are the thoughts of one ordinary Traveling Preacher, reflecting on the changes of the past half a century.

One unchanging factor of Methodist itineracy is that pastors are sent, not called. Itinerant Elders are not hired by the local church, we are sent by the bishop on behalf of the annual conference.  Until the 1980s we were officially known as “Traveling Elders in Full Connection.” To be ordained and received into full membership means we are authorized to travel, to go wherever we are needed for the sake of the larger mission. While Ordained Deacons seek their own place of service and Lay Preachers/Local Pastors serve in local settings with their ministry limited to that congregation, the covenant of lifetime itineracy is unique to the Ordained Elder. Our only church membership is in the covenant community of the annual conference.

The original Methodist conference was comprised solely of the Traveling Preachers. Today the annual conference includes Deacons, Local Pastors, and often twice as many laity as clergy. Its nature has changed significantly, but for Ordained Elders, it is still our home base from which we are sent. Unfortunately, that sense of community and calling is weaker today, and attempts to create a meaningful “Order of Elders” have failed. We often feel more like free agents in the baseball draft, hoping to be assigned to a winning team. I am not sure the shared covenant and calling can be restored.

One of the positive additions in recent decades is Consultation, giving clergy and congregations a voice in the appointive process. Instead of appointments being made in some smoke-filled backroom or solely at the command of the bishop, consultation provides the possibility of more effectively matching the pastor’s skills with the needs of the local church. The annual written advisory from both pastor and congregation indicating the desire to either move or stay for another year gives transparency to the process. A pastor can no longer tell the congregation, “The bishop made me move”, when in fact he/she had been whispering to the superintendent, “Get me out of here!”

Another significant change is the invitation for clergy to indicate churches they might be interested in serving. What a radical departure from years past when even a hint of such a desire would be the kiss of death on the appointment! Allowing for the fact that the conference is a closed system—there are only so many pastors and so many churches and none of them are perfect—meaningful consultation helps the bishop and cabinet make the best possible appointments.

Introduction, not an interview

In most of my moves, I was blessed by being introduced to the Staff Parish Committee by the district superintendent early in the process. The superintendent made clear it was an introduction of the person the bishop intended to appoint, not an interview with a search committee. It was much better than my early days when I just showed up after a phone call between the superintendent and the SPRC chair saying, “Hi!  I’m your new pastor!”

My seminary graduating class included one woman who planned to be a pastor and my ordination classes were all men. Today about 50% of seminary students are women and women often comprise most of the ordination class. One of my early mentors, the Rev. Ray Lamb, ran into a brick wall when he tried to bring Beth Issacs, the first woman ordained in the Detroit Conference, to Lapeer as his associate. By contrast, today many of our major churches are led by women. I give thanks for the gifts of my sisters in the ministry who serve so effectively.

Also, in the last couple years, we have seen the appointment of associates as the senior pastor in the church where they serve, something that was never done in the past. The ability of the itinerant system to adapt to clergy couples and clergy spouse employment shows something of its resilience. The addition of the Order of Deacons has created new possibilities and demands on the appointive system, but my focus here is on the changes in itineracy for the Ordained Elder.

There was a time when clergy went to annual conference not knowing their appointment until the official Reading of the Appointments. If you were the pastor in Ann Arbor and heard someone else’s name read in your place, it might be a long wait until you knew where you were going, especially if it was Ypsilanti or Zeeland! Then there would be the mad dash to a payphone to call home and say, “Honey, start packing!” Today appointments are announced well in advance, giving time to prepare for the transition. I’ve experienced announcements as early as January/February and have found that to be incredibly helpful for my family and the congregation.

Fixed, for another year

We joke about clergy getting “fixed” at annual conference, but hearing the bishop say, “I announce these appointments fixed for another year” was always a powerful moment for me. In that word, I realized I was going out under the authority of the bishop as a representative of the annual conference. I left conference with a keen sense of being sent to my place of service for the sake of the mission of the church. The year I retired, when my name no longer appeared on the appointment list, I felt free but adrift, no longer “fixed.” Of course, as an Ordained Elder the annual conference will always be my covenant community until I make my final journey and my name appears on another list.

As the song says“…but when traveling days are over, not a shadow, not a sigh.” Giving thanks for 50 years as a Traveling Preacher.