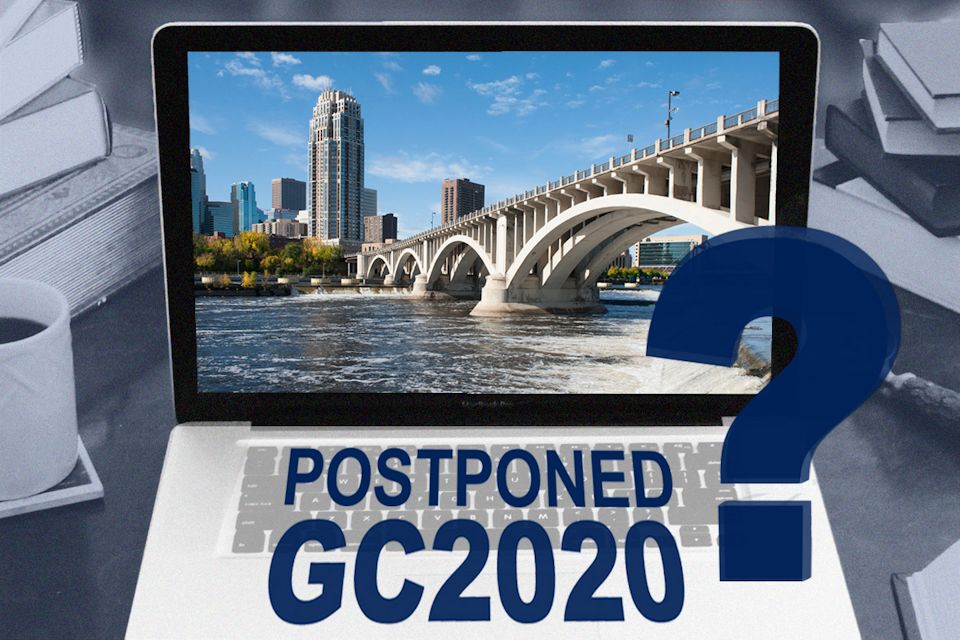 The General Conference of The United Methodist Church was originally scheduled to meet last year in Minneapolis. With COVID-19 still a threat, questions remain about whether General Conference can go forward as planned Aug. 29-Sept. 7, whether in Minneapolis or online. ~ photo by Krivit Photography, courtesy of Meet Minneapolis/image of laptop by Kathryn Price/United Methodist Communications/ graphic by Laurens Glass, UM News

Vaccines may not be enough to save an in-person General Conference this year — but virtual technology may not suffice either.

General Conference organizers have made no final decisions about whether The United Methodist Church’s top lawmaking assembly can go forward as planned on Aug. 29-Sept. 7 in Minneapolis.

However, the Commission on the General Conference chair recently outlined the challenges facing the group as it weighs options for the international gathering already postponed from 2020 by the COVID-19 pandemic.

Kim Simpson, the chair, spoke during the Feb. 4 online meeting of the Connectional Table, a church leadership body that coordinates ministry and resources for denomination-wide ministries.

“As you know, the commission is trying the best it can to make sure we can make best-informed decisions for all delegates and have equal opportunity for adequate information,” Simpson said.

The coming General Conference could be pivotal. Delegates face multiple proposals to resolve United Methodists’ intensifying debate over homosexuality by splitting the denomination along theological lines.

The commission plans to meet online Feb. 20 to review a report from its technology study team, appointed last fall to look at virtual options for the coming gathering.

The coming General Conference has 862 voting delegates — 55.9% come from the U.S., 32% from Africa, 6% from the Philippines, 4.6% from Europe, and the remainder from concordat churches that have close ties to The United Methodist Church. Also, the global gathering typically requires bishops and hundreds of staff and volunteers — including marshals, pages, interpreters, and translators — to function.

Meeting in person may be out of the question. COVID-19 vaccines are rolling out slowly worldwide, more contagious virus variants are emerging, and travel restrictions continue worldwide. At present, the state of Minnesota is limiting indoor gatherings to no more than 150 people.

Yet, in this time of Facebook Live worship and daily Zoom hangouts, taking the denomination’s biggest church meeting online is no simple task.

Simon Mafunda, a veteran delegate from Zimbabwe, also has raised concerns about connectivity and accessibility, especially for African delegates.

“I am happy that there has been a technology study team, which has looked at some of these issues,” he told United Methodist News. “The planners of GC need to come up with innovative ways to be able to go over these hurdles.”

He pointed out that General Conference has used technology before to increase accessibility. In 2016, General Conference organizers worked with United Methodist Communications to provide tablets and training to delegates from central conferences — church regions in Africa, Europe, and the Philippines.

Still, Mafunda also worries about fairness. “If GC goes virtual,” he said, “we will need an assurance or a way of making sure that delegates express themselves freely without any form of pressure around them.”

One option on the table is for delegates to meet together in different regional gatherings to share technological support.

The Rev. Ande Emmanuel, a delegate from Nigeria, said that would work for Nigerian delegates. He said a virtual General Conference is possible, but it would need a streamlined agenda.

With all the challenges, some United Methodists have raised the possibility that General Conference might need to be postponed again.

Among them is the Rev. Jeremy Smith, a frequent blogger on United Methodist issues who has written about barriers to a virtual General Conference.

“I sympathize with these hard choices, even as I think a virtual General Conference is too easily manipulated, lacks representation, and excludes too many people,” Smith, pastor of First United Methodist Church in Seattle, told UM News.

The denomination’s intensifying debate around the status of LGBTQ Christians — which has already led multiple congregations to disaffiliate — has many United Methodists arguing that General Conference must happen sooner rather than later.

Before COVID-19 caused shutdowns worldwide, a diverse group of United Methodists had negotiated the Protocol of Reconciliation & Grace Through Separation. The widely endorsed proposal would allow traditionalists to leave with church property and $25 million to form their own denomination, but it needs General Conference approval to take effect. The traditionalists want to maintain church restrictions related to marriage and ordination.

The Rev. Thomas Lambrecht, vice president and general manager of the traditionalist group Good News, has written a commentary arguing for a virtual General Conference. He plans to publish the second part of his case on Feb. 12 with a specific focus on how the meeting might work.

“My larger concern is that we will continue to be stuck in our current conflict in which no significant decisions can be made,” he told UM News. “There will be issues around the number of bishops, the budget, jurisdictional and annual conference boundaries, to name just a few. Until we know who will continue in the post-separation UM Church, none of those decisions can be made. We are paralyzed.”

Christine Schneider, a veteran delegate from Switzerland, echoed all the concerns about a virtual General Conference.

Still, she added, General Conference in normal times has its problems, including sometimes-poor translations, the difficulties of Robert’s Rules of Order, and frequent distrust about how presiders handle debate.

Schneider is part of an informal, international group of delegates trying to help the denomination focus on a shared vision rather than its divisions.

“However, we hold the next GC, guaranteeing fairness seems to be the main challenge,” she said. “Without fairness, we lose trust. And that would be disastrous at this critical time in the life of the UMC.”