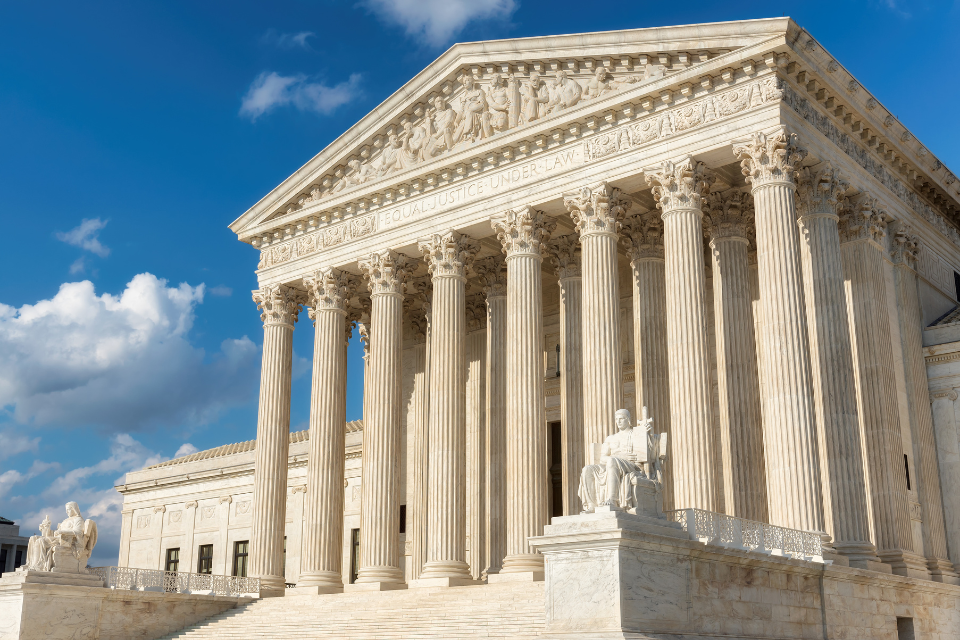 A view of the U.S. Supreme Court. United Methodists have varied reactions after the Supreme Court on June 24 overturned Roe v. Wade, holding that there is no longer a federal constitutional right to an abortion. ~ photo by lucky-photographer from Getty Images Pro

United Methodists with varied views on the abortion issue were alternately stunned and satisfied after word came down from the Supreme Court that Roe v. Wade would no longer be the law of the land.

“I think we’re in a very, very sad and difficult time,” said the Rev. Kennetha Bigham-Tsai, a veteran General Conference delegate from Michigan who is also candidate for bishop in the North Central Jurisdiction. “I know that some will be celebrating this. … We are already a fractured country; this is going to fracture us more.”

The Supreme Court released the 5-3-1 opinion on June 24, but a leaked version of the ruling in May had already made the likely decision apparent. The final opinion “hewed closely” to the leaked version, according to Politico. Justice Samuel Alito wrote the majority opinion.

The Dobbs v. Jackson Women’s Health Organization decision, which overturns the landmark Roe v. Wade ruling the high court made in 1973, gives the go-ahead to states to formulate their own policies on abortion. Some have already done so in anticipation of the ruling. Texas last year effectively outlawed abortion after the sixth week of pregnancy and allows almost any private citizen to sue anyone who helps a pregnant women terminate her pregnancy.

“Technically, somebody who rapes you could financially benefit from that (under the Texas law) … because of this ability for anyone to sue whoever might assist a woman in some way in seeking an abortion,” said the Rev. Rebecca David Hensley, a deacon in the North Texas Conference and a Ph.D candidate in religious studies in a joint program at Iliff School of Theology and the University of Denver. She also teaches as an adjunct professor at Iliff.

Hensley, who is 23 weeks pregnant, said she felt “numbness” when she heard about the ruling, along with anxiety, anger and heartbreak.

“My real immediate response for me was thinking about my own pregnancy, and that we’re bringing a baby girl into this world and that it’s becoming an ever more frightening place for girls and women.”

Harriett Jane Olson, top executive president of United Women of Faith, said “the banning of abortions will not end abortions.”

“Rather, women of financial means will travel to areas where abortion remains safe and legal,” she said, “while many poor and working-class women and girls will resort to unsafe procedures that could cost them their lives, which happened too often prior to the Roe decision.”

The Rev. David F. Watson, academic dean and vice president for academic affairs at United Theological Seminary in Dayton, Ohio, and an ordained elder in the West Ohio Conference, said that “regardless of what federal or state laws regarding abortion may be, the role of the church does not change. We are to protect life, stand up for the most vulnerable and care for those in need and support families.”

The United Methodist Church’s official position on abortion in the Book of Discipline states: “Our belief in the sanctity of unborn human life makes us reluctant to approve abortion. But we are equally bound to respect the sacredness of the life and well-being of the mother and the unborn child.”

The Book of Discipline’s Social Principles go on to assert, “We recognize tragic conflicts of life with life that may justify abortion, and in such cases we support the legal option of abortion under proper medical procedures by certified medical providers.”

In response to the decision, Bishop David Alan Bard encouraged those in The Michigan Conference to read the statements carefully and then act with good conscience. “I hope Michigan United Methodists will evaluate policy proposals in light of this statement,” Bard said. “Beyond that, we need to be asking about policies that help provide access to affordable contraception, affordable health care—particularly health care for pregnant persons. We need to ask how any policy proposal will affect persons who have historically had limited access to such health care resources. What will the impact of the Supreme Court decision and resultant state and national policies be on persons of color and on persons who struggle economically?”

The Supreme Court’s ruling is in harmony with The United Methodist Church’s historical values, said the Rev. Paul T. Stallsworth, pastor of Whiteville United Methodist Church in North Carolina and editor of Lifewatch, the newsletter of the Taskforce of United Methodists on Abortion and Sexuality. The organization is an unofficial advocacy group that has long organized a worship service to coincide with the annual March for Life that protests Roe v. Wade.

“Through the centuries, the church has taught that the least of these include the unborn child and the mother of the unborn child,” Stallsworth said. “These are folks who are very vulnerable, very open to manipulation, abuse and so on. … I think a part of this also has to do with the church being engaged in ministry towards those who are threatened by abortion.

“That would mean assisting the women themselves,” he said. “Also, it could mean being in assistance to crisis pregnancy centers that would help the women. I think that’s very important to do.”

A statement from United Methodist Board of Church and Society decried the high court’s decision and emphasized the church recognizes there are tragic situations that may necessitate abortions.

“Today’s decision unleashes severe consequences and threatens access to care for every community, and specifically Black, Brown, Indigenous and low-income communities,” it stated. “This decision comes at a time when many states are already moving to restrict access to quality care and comprehensive health care services like family planning, birth control and the expansion of Medicaid. These restrictions deny the basic right to lifesaving care that everybody has the right to access and receive.”

Likewise, a statement from the United Methodist Commission on the Status and Role of Women said that the ruling was likely to be more of a burden for less wealthy Americans and is also a setback for women’s equality.

“By reducing a woman’s rights, our class structure is further divided, contrary to our belief that all women and men are created equal,” said the statement. “We grieve this injustice.

Olson, of United Women in Faith, called on “federal and state legislators to act to protect the lives of women and girls by codifying their right to privacy, to legal and safe contraceptives, and, in tragic conflicts of life with life, to abortions. State-coerced motherhood — like state-coerced sterilization — undermines women’s ability to carefully discern and follow God’s calling in their lives.”

“As we look through the lens of Christ at the hurting world around us, we can’t help but to reflect on the heartfelt plea of John Wesley, ‘to do no harm,’” said Greg Arnold, top executive of the churchwide Commission on United Methodist Men. “While the Supreme Court’s decision to overturn Roe is lauded by many as an effort to honor the sanctity of life and therefore ‘reduce harm,’ the lives of so many women have been potentially placed into the path of harm.”

Arnold said United Methodist Men continues to support the Social Principles and to “stand firmly by ‘the well-being of both mother and unborn child.’ This includes the right of choice and equitable access to legal medical care when the sanctity of life is at risk for either mother or unborn child. We ask for God’s wisdom and His spirit who teaches how to pray in such challenging moments.”

Stallsworth believes the ruling signals “an increase in democracy.”

“States will now democratically decide their own laws on abortion,” he said.

“As those democratic discussions and debates unfold, the church will most certainly have a role to play, a witness to offer. All the while, the church will continue to strive to be the church — offering the Gospel of forgiveness to all, teaching and preaching the truth about life and abortion, and reaching out in mercy to those who are tempted to take innocent lives to solve pressing problems.”

Bishop Thomas J. Bickerton, speaking on behalf of the Council of Bishops in their joint statement, reiterated the spirit with which the church needs to continue to respond. Bickerton concluded, “I call all United Methodists to a time of deep reflection, prayer, and mobilization as we continue the struggle to stand in the gap with intercession, advocacy, support, and grace for such a time as this. In the midst of our diversity of opinion, may we be one in our response to those who are broken and to a world that is divided.”