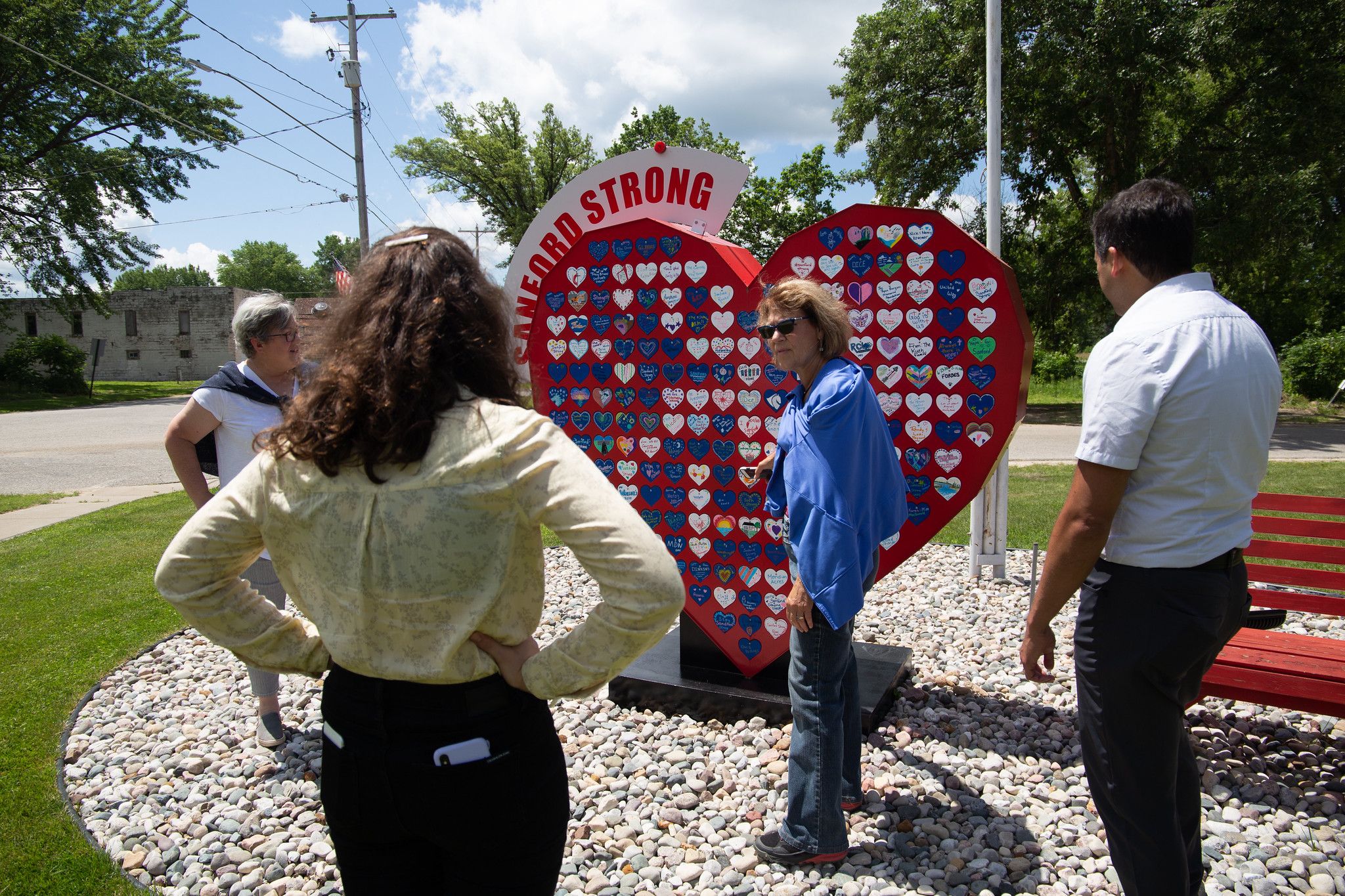 Paul Perez and Disaster Case Manager Regan Shultz look at the Sanford Strong sign in Sanford MI during a go-see tour of the flood recovery in June of 2021. A few months later, UMCOR issued a $600,000 grant to the Michigan Conference for direct assistance to those in Iosco and Arenac counties still working to recover from the flood. “This grant is life-changing for people in those counties,” said Nancy Money, Director of Community Impact for Midland County United Way. She added, “It will make a huge impact. These people’s needs would not be met if it wasn’t for these UMCOR dollars.” ~ MIphoto/Mark Doyal

UMCOR answered many appeals for help in 2021. Here are key responses and a few of the major grants awarded to help alleviate suffering worldwide, including Michigan.

In 2021, the United Methodist Committee on Relief (UMCOR) provided a caring presence and humanitarian aid for people impacted by severe weather, earthquakes and volcanoes, COVID-19 lockdowns, political unrest, and armed conflicts. It also provided shelter, comfort, and solutions for refugees, asylum seekers, and other migrants along their journeys. UMCOR was born in the throes of World War II. By God’s grace, United Methodists continue to support UMCOR today in response to many complicated disasters that severely affect individuals, families, and communities.

The 7.2 magnitude earthquake that struck Haiti on August 14, 2021, required both immediate relief and long-term recovery planning. The death toll was estimated at 2,200, while more than 12,200 people were injured, and hundreds remain missing. Official estimates indicate that 40% of Haiti’s total population still needs humanitarian assistance. The situation was exacerbated by Tropical Storm Grace, which struck the island two days later.

UMCOR has responded by coordinating efforts with ecumenical partners and various programs of Global Ministries, such as Global Health. Immediately following the quake, grants for emergency medical supplies to the Église Méthodiste d’Haiti (Methodist Church in Haiti) for two medical clinics and Service Chrétien d’Haiti for the Les Cayes General Hospital were awarded. In addition, UMCOR partnered with ACT Alliance of Geneva, Switzerland, and the Community Coalition of Haiti to meet basic humanitarian needs with cash assistance for families, food, hygiene, health, shelter, protection, and livelihoods support.

A grant of nearly $100,000 to the Methodist Church of Haiti will support a mobile clinic and a water purification project, helping to fill a gap left by the loss and damage of health facilities. This grant is funded significantly with a gift from First United Methodist Church in Roanoke Rapids, NC, in memory of the Rev. Sam Dixon, the former head of UMCOR and a former pastor of First UMC. Dixon perished in the 2010 Haiti earthquake along with another Global Ministries’ colleague, the Rev. Clint Rabb. UMCOR matched the gift from First UMC.

A second significant response for UMCOR in 2021 requiring multiple strategies and partners has been the unrest and uncertainty in Afghanistan and the evacuation of Afghans following the U.S. military withdrawal there. UMCOR is working with long-standing partners to provide humanitarian relief in Afghanistan. Grants support displaced families in the Kabul, Kunduz, and Mazar-i-Sharif areas.

In the U.S., UMCOR is urging congregations to partner with Church World Service (CWS) to resettle Afghan refugees. United Methodist churches can apply to UMCOR for up to $1,000 in reimbursement for costs associated with resettling families. CWS is one of nine resettlement agencies approved by the U.S. Department of State.

Relief and recovery efforts in the U.S.

In the United States, hurricane season has passed, and while most storms remained at sea, a few made landfall this year. UMCOR’s U.S. Disaster Response office connected with several conferences in the path of Hurricane Ida and earlier in the season with conferences affected by hurricanes Henri and Fred.

The California-Nevada and Oregon-Idaho conferences received grants, technical assistance, and training for response to the 2021 Dixie and Bootleg fires. It can take years, particularly for communities hard-hit, like Paradise, California, in 2018, to recover and rebuild after fire. The Pacific Northwest Conference received a grant in November 2020 to begin a recovery program for the Okanagan County fire in Washington state, which includes the Colville Reservation. In 2021, UMCOR continued accompaniment with the Pacific Northwest Conference with an additional fire recovery grant to help coordinate volunteer teams assisting at least 53 households with repair and reconstruction.

Emergency funds also aided the Texas, Central Texas, and North Texas disaster response efforts after the winter storm and flash snow event that disrupted the state’s infrastructure. The Rio Texas Conference received a grant for an April hailstorm that damaged the entire town of D’Hanis, and the Texas Conference received additional relief funds to continue plumbing repairs in homes and churches severely affected by the winter storms.

A recovery grant in March 2021 for the Louisiana Conference assists the conference’s disaster response program with ongoing coordination of volunteer teams to address damage incurred by hurricanes Laura and Delta in 2020.

Accompaniment for refugees and asylum seekers

An UMCOR, CWS, and National Justice for Our Neighbor’s partnership received an additional $1.1 million in 2021 to continue the Leading with Welcome programs in Jersey City, Miami, and Houston. Through this program, JFON provides legal assistance to asylees, and CWS provides critical case management that helps people seek psychosocial support, health care, and other vital services.

More than 30 U.S. churches received Mustard Seed Migration Grants from UMCOR for one-time community-based service projects. These projects are estimated to benefit over 5,000 individuals from the immigrant community.

UMCOR provided grants to shelter and service organizations, including churches, on both sides of the U.S.-Mexico border to address the needs of the large migrant population and the lack of services available for them. Grants also supported partner organizations serving refugees and asylum seekers in more than 20 other countries between the Global Migration and International Disaster Response programs.

~Christie R. House is a consultant writer and editor with Global Ministries and UMCOR.