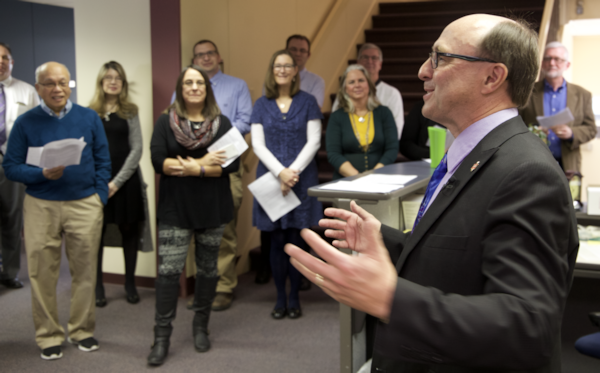 Bishop David Bard offers a blessing during the Service of Decommissioning held on November 29, 2017 at the West Michigan Conference Center in Grand Rapids. ~mic photo/Mark Doyal

Staff is now leaving the building that was a headquarters for the West Michigan Conference since 1968.

For almost 50 years the blond brick building bore the nickname, “11 Fuller.” Since the merger that created The United Methodist Church in 1968, the West Michigan Conference Center in southeast Grand Rapids knew no other home.

Thousands of volunteers, dozens of staff and nine Conference Council Directors (now Director of Connectional Ministries) from the Rev. Keith Avery to the Rev. Benton Heisler, worked within its cozy confines.

A number of those persons were present on November 29, 2017 as the building was decommissioned in preparation for relocation of operations to three sites: “Conference Center West” in downtown Grand Rapids, Conference Center North in Lansing, and the Michigan United Methodist Camp Office in St. Johns.

Memories were shared by those in attendance and through letters read by Benton Heisler. The current staff person with the longest tenure of service, Kathy Hippensteel, noted, “It’s been like my home nearly all of my adult years.” Kathy joined the staff in 1979. Other sample comments …

Relocation to new spaces is expected to be complete by December 15, 2017. There is an offer on the 11 Fuller building being considered at the present time.