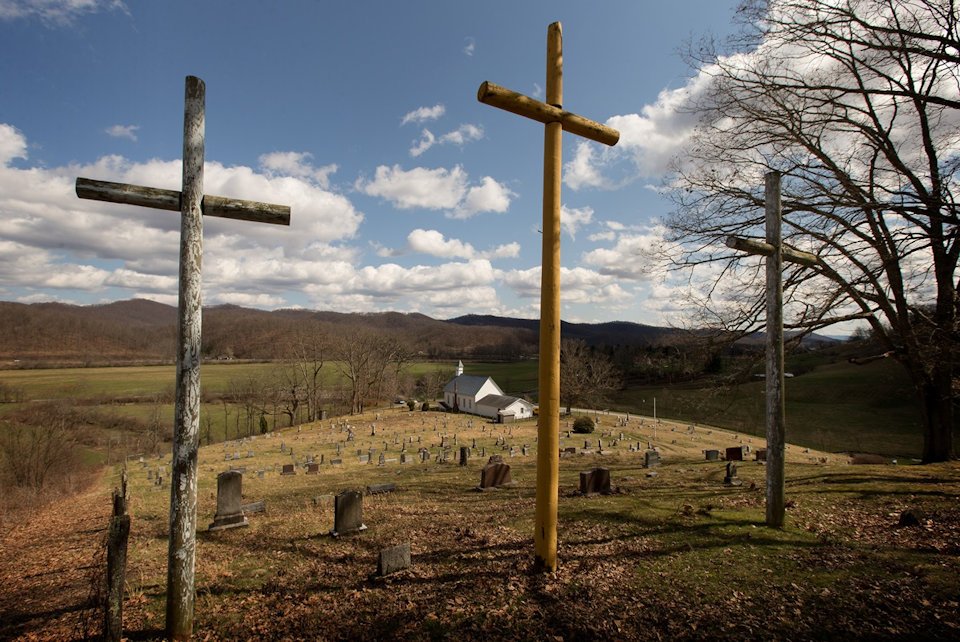 Three crosses stand above the cemetery at Israel United Methodist Church near Montrose, W.Va., in 2015. Leaders of rural churches have expressed concerns about the impact that decisions made at the special General Conferences could have on rural and small congregations. ~ umns/Mike DuBose

A group representing the interests of United Methodist rural congregations has sent a letter of concern to GC 2019 delegates.

A group representing the interests of United Methodist rural congregations has sent a letter of concern to delegates for the upcoming special General Conference.

The letter from United Methodist Rural Advocates asks the delegates to be aware of the “potential harms” for rural and town and country churches while considering plans for the denomination’s future.

The Rev. Randy Wall, the Rural Advocates chairperson, said its members had discussed the situation several years ago and acknowledged “that there were differing opinions about the issues that are before General Conference 2019.”

That legislative gathering, called by the United Methodist Council of Bishops to try to address the longstanding, schism-threatening division over homosexuality, is set for Feb. 23-26 in St. Louis.

While members of Rural Advocates “are not of the same mind” about the place of LGBTQ members in the church and issues of ordination, “we have continued to work together,” Wall said. The glue that has held the advocacy group together “has been its focus on rural churches and rural communities and rural people.”

The admonition to do no harm “is certainly part of our historical heritage as United Methodists,” explained Wall, a retired elder who still serves as a pastor in the Western North Carolina Conference. “I feel like whatever stance General Conference takes, there is the possibility of causing harm. We’ll mourn and lament that.”

Officers of the advocacy group point out that rural churches in the U.S. are diverse both theologically and geographically. But relationships are what hold them together.

Many of these churches have chosen not to focus on their differences, said the Rev. Roger Grace, immediate past president of Rural Advocates and a retired elder in the West Ohio Conference. “There are a lot of things that could divide us but there are more things that unite us,” he said.

Rural congregations do want to have a voice within the denomination, which is why the first Methodist Rural Fellowship formed in 1940. As has been the practice, the current organization does not take a stand on specific issues, but still promotes that voice.

At GC2019, Rural Advocates is concerned about any decision that will force rural congregations to vote on whether to leave or stay within the denomination. The letter to delegates points out that such action “may significantly diminish average attendance in those churches.”

When he served as a district superintendent, Grace became familiar with a country church of under 40 members that welcomed a gay couple with adopted children “with open arms.” Today, he worries about the effect of a vote on a congregation like that — or any church with a few dozen members or less.

“If you have to have a vote, it creates conflict,” Grace said. “It creates winners and losers.”

With her own small-church experience, Judy Hill — a lay member of the Mountain Sky Conference and the Rural Advocates treasurer — said she would not look forward to such a vote.

Her conference has grappled with the controversy that arose when Bishop Karen Oliveto, the denomination’s first openly lesbian bishop, was appointed as its episcopal leader in 2016. “We’ve already faced that with humility and with grace and that’s how we’ll go forward,” Hill said.

The letter to delegates also cautions that any outcome diminishing connectional support “will threaten the health of rural churches.” Hill, who lives in a Colorado county that borders the states of Kansas and Nebraska, agrees. In particular, it would be even more difficult to attract pastoral leadership to small congregations, she said.

A third concern about General Conference actions causing harm is that any significant disruption “distracts from our mission of Making Disciples of Jesus Christ, for the Transformation of the World,” the group said in its letter.

The work of Rural Advocates, Hill pointed out, is guided by a values statement that considers the health, vitality and sustainability of each local congregation “as the primary value” of the denomination while recognizing its global nature. Legislative change within The United Methodist Church, “should do all the good possible for the local church,” she said.

Rural communities provide “a context for mission, ministry and the making of new disciples for Christ,” often working in partnership. “We do not require agreement on all things to work together, whether within denominational processes, or with the poor, or for the transformation of our communities,” the values statement says.

Sorting out a new plan of denominational organization will take time, and probably enhance the feeling among rural congregations that they are overlooked, Wall said. That will make it even more difficult to offer ministry in places where the church may be the only institution left in the community, he added.

Grace believes that when the denomination is bogged down arguing over issues “we’re not doing the ministry that I think God has called us to do.”

Discussions over the denomination’s future do encourage local churches to examine their own commitments to ministry and mission, Hill noted.

“You have to take time to pray and look at what you’re there for,” she said. “What could be a negative may end up being a positive.”