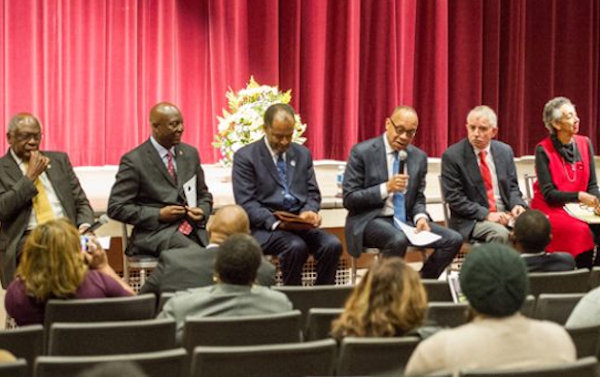 A panel discusses the past and  “really weird now” on the way to real equality and real economic justice.

ORANGEBURG—When it comes to race relations, the church has a big role to play in leading the conversation and speaking out about what is right.

That was the thrust behind a forum and panel discussion on “Race Relations and the Role of the Church: Then and Now,” held at Claflin University Jan. 28.

The forum, presented at Claflin by Trinity United Methodist Church in honor of its 150th anniversary last year, featured as moderator Orangeburg native Eugene Robinson, a Pulitzer Prize-winning journalist and associate editor of the Washington Post. Trinity had served as a meeting place for students to plan strategy for their demonstrations during the Civil Rights Movement, as well as meetings led by civil rights leaders such as Roy Wilkins, Jesse Jackson, Thurgood Marshall and Dr. Martin Luther King Jr.

Cecil Williams, an award-winning photographer and civil rights historian, also shared a special video presentation of his 1960s era photography prior to the discussion.

The room was rapt as Williams shared his photos through the video presentation.

“The church has always been the cornerstone of the community, where we could go and plan our marches and gatherings,” Williams told the crowd; he said people used lawsuits, challenges, marches and demonstrations to bring awareness to the need for civil rights.

He also shared photography and discussion about the Orangeburg Massacre of 1968, when three unarmed students were killed by police officers.

Claflin President Dr. Henry Tisdale welcomed the crowd to the forum, noting that Claflin, Trinity and nearby South Carolina State University have been at the forefront of the Civil Rights Movement.

“Dr. King said the real fight was going to be the fight for real equality and real economic justice. That’s the fight we’re in today,” Tisdale said, thanking those present for their role in making that happen.

Robinson began the panel discussion by noting “we are living in a really weird ‘now,’” and he said that during the election and for the last couple of years he has seen a “kind of old-school racism in some of the comments and remarks that I haven’t seen since the old days.”

This makes the day’s discussion all the more critical, Robinson noted.