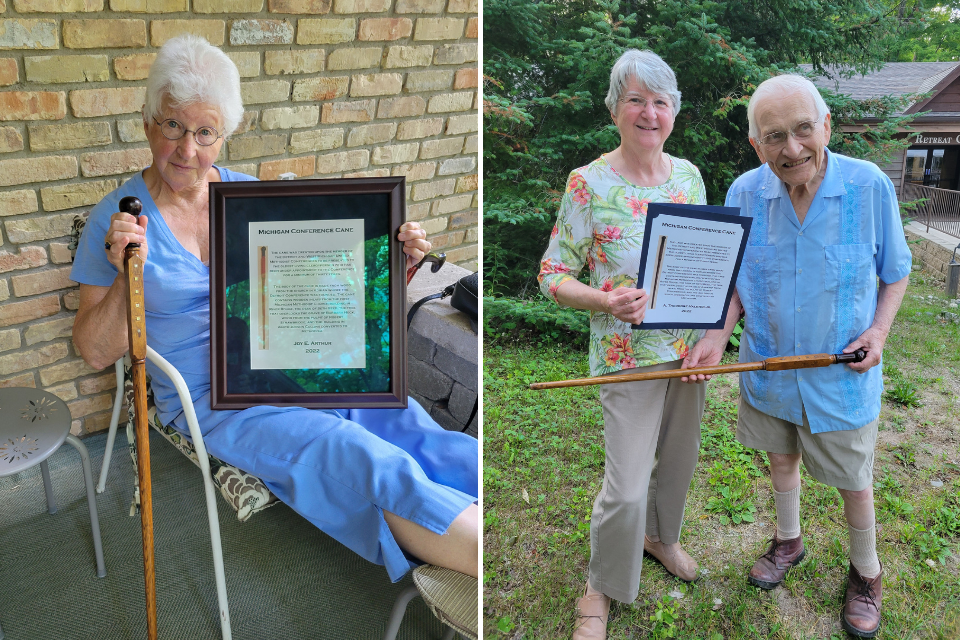 Rev. Joy Arthur was posthumously honored as the Holder of the Michigan Conference Cane when the cane was presented to his widow, Dorothy, on July 20, 2022 (left). Rev. Arthur passed away unexpectedly on July 18, less than two months after receiving the honor at this year's annual conference. On July 21, Diana Miller, Conference Cane Chair for the Commission on Archives and History, presented the cane to Rev. Ted Halsted, who is the oldest living clergymember of the conference (right). ~ photo courtesy of Diana Miller

Rev. Ted Halsted follows the death of Rev. Joy Arthur as the Holder of the Michigan Conference Cane, which honors the oldest clergy member of the conference and continues a long-standing tradition.

In quick succession, Halsted followed Rev. Joy Arthur, who was named the Holder of the Conference Cane at annual conference in May but died unexpectedly on July 18, 2022. He was posthumously honored when the cane was presented to his wife, Dorothy, on July 20 and remembered in a service at Midland United Methodist Church on July 31.

Following Rev. Arthur’s death, the cane was passed to Rev. Halsted. Diana Miller, representing the Commission on Archives and History, met him at Lake Louise Christian Community on July 20, where Ted has been a longtime cottage owner. He has written two books related to the property—Spring-Fed Waters and Grandfather Tales of Lake Louise, which includes stories he loves to share with campers at Lake Louise Camp. Rev. Halsted said, “There’s nothing like activity with youth to keep you young in spirit.”

“The phone call telling me I would receive the Conference Cane was a complete surprise,” he admitted. “It seems unreal that at 95 with no aches or pains and swimming laps in the Earlham College pool, I am the oldest long-serving United Methodist pastor in Michigan. Yet the reality is that my first pastoral appointment was seventy-four years ago while I was a student at DePauw University.”

In 1949, Rev. Halsted went to India as a missionary and was received as a Probationary Member of the Southern India Annual Conference. It was there he met his wife of 52 years, Marceline. She was a Methodist missionary nurse and died in 2005. Ted’s father and mother had been Methodist missionaries in France at the end World War I, and when Ted left for India shortly after World War II, he took the same steamer trunk they had taken to France.

Returning to the United States, he graduated from Yale Divinity School and was ordained as an Elder in Full Connection in the Detroit Conference in 1956. He served churches in Dixboro; Dexter; Hemlock, Nelson; Marlette; Lincoln Park: First; and Redford. In 1986, he was appointed as the District Superintendent of the Marquette District and retired in 1992, having served a total of 43 years in the ordained ministry. Ted has recently finished writing his memoirs entitled Trail Marks and resides in Indiana, near his family.

The tradition of the Conference Cane stretches back into Methodist lore and history. In 1904, when Michigan Methodists celebrated the centennial of the arrival of the first Methodist preachers in the state, the two annual conferences looked for ways to honor retired ministers. Donors in each conference provided the canes and the tradition was started.

The West Michigan cane is elegant with a gold head. The Detroit Conference cane is made of wood from the original Methodist Episcopal church in Adrian where the Detroit Conference was organized in 1856. It includes inserts of wood from the first Methodist log church on the River Rouge, the bookcase of Seth Reed, and a tree near the grave of early Methodist Barbara Heck. There is an insert of wood from the Ann Arbor church where Judson Collins, the first Methodist missionary to China, was converted in 1837 and from the pulpit of Lovely Lane Meeting House in Baltimore, Maryland, the birthplace of the Methodist Episcopal Church in 1784.

When the two conferences merged in 2019, the Commission on Archives and History retired both canes and replaced them with a new one. It is presented to the oldest clergy member of the conference who has been under appointment for at least 30 years. The cane is preserved by the Commission on Archives and History and a plaque is given to each holder at the time of their recognition.

Passing the cane symbolizes the long tradition of Methodist ordained ministry. Joy Arthur and Ted Halsted represent a quickly passing generation of United Methodist clergy who have served with distinction and now entrust the ministry of the church to others. “We have a wonderful heritage,” Halsted said, “and my hope is that younger generations of clergy will realize that The United Methodist Church is so much more than just the local church. We have shared the gospel and put it into practice all around the world.”

May succeeding generations carry on this faithful legacy in ministry for the sake of Jesus Christ.