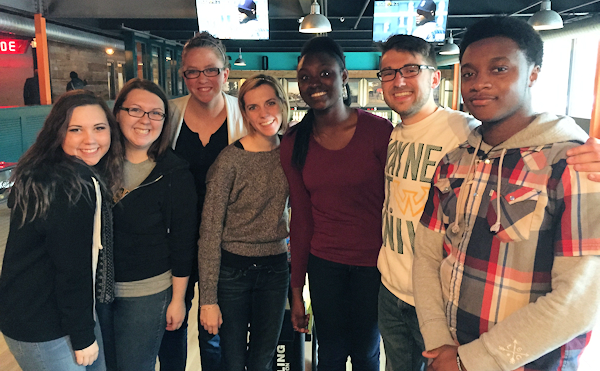 The Motor City Wesley Foundation is experiencing new areas of growth as they pursue ministries that encourage diversity and cultural exchange.

For two semesters Charles Boayue III was active at Motor City as an International Student Outreach Intern through Encounter My Call. He worked to form a small group among international students.

As a senior at Wayne State University, Boayue is studying psychology as a major with minor focus in business. He aspires to find a career in Health Care Administration and intends to move towards an MBA.

Boayue participates in leadership at United Methodist Urban Youth Alliance, where he designs recreational events in that ministry context.

Carl Gladstone, Director of the Motor City Wesley Foundation, stated that by striving to connect with international students, Boayue attempted to create a alternative experience of Christianity than others available on campus. Boayue’s efforts were steeped in “rich Wesleyan tradition,” honoring the people he encounters as being partners in conversation rather than souls to proselytize. “There’s a certain style [of ministry] on campus that tries to find the already-Christians,” Gladstone said, while not placing priority on relationships with people who are not Christian.

“It was an opportunity,” Gladstone said, “to share boldly as Wesleyan Christians. We want to provide a compliment to the other campus ministries by providing a perspective of deep questioning and careful listening.”

“This was an opportunity to share boldly as Wesleyan Christians.”

Boayue said that he saw God working in the internship through the conversations he had with different international students. Boayue’s group began as a Bible study, but he found it difficult for people to relate to one another because of the variety of background and faiths. This pushed him to think of different ways to engage with people. Despite these differences in culture and religions, Boayue saw God working through himself and the students by revealing that despite their differences all were “spiritually in one accord.” “Muslims, Buddhists, Atheists, and others,” Boayue said, “it didn’t matter— we were all on the same page.” He continued, “The most important thing is learning how to appreciate different cultures and perspectives and being comfortable with them.”

A similar ministry was developed at Metropolitan UMC in the early 1990’s to try and develop relationships between internationals and the congregation. Gladstone believes that Boayue’s program connecting to international students on Wayne State University’s campus will encourage Metropolitan UMC to revisit their heritage. The church may reclaim that ministry by supporting Boayue in his efforts. “Metropolitan would have had to start from scratch to develop this kind of ministry,” Gladstone said. Instead, Motor City Wesley is able to supply an intern that do that. “They have been able to celebrate Charles as a young person able to encourage this new ministry,” Gladstone said.

Currently, Boayue is looking to develop a new study that focuses on intentionally bringing in people of different faiths for the sake of discussion and to see what “rings a bell” with everyone in the group. The structure would be the shape of a “bold forum,” where people are encouraged to challenge one another in their understanding while being allowed o grapple with each other and each other’s ideas.

“The idea is not about winning, but about understanding” said Gladstone.

Although admittedly difficult, Boayue’s hope is to bring the successes of his previous small group experience with him as he builds this “bold forum.” Being able to break down walls between people to enable conversations and understanding the dynamics of international students are some of these insights. He has also learned that it is possible to nurture people toward positive change.

Moving forward, Boayue and Motor City Wesley are meeting people where they are and who they are, blurring the lines between different cultures and different faiths for the sake of relationship.