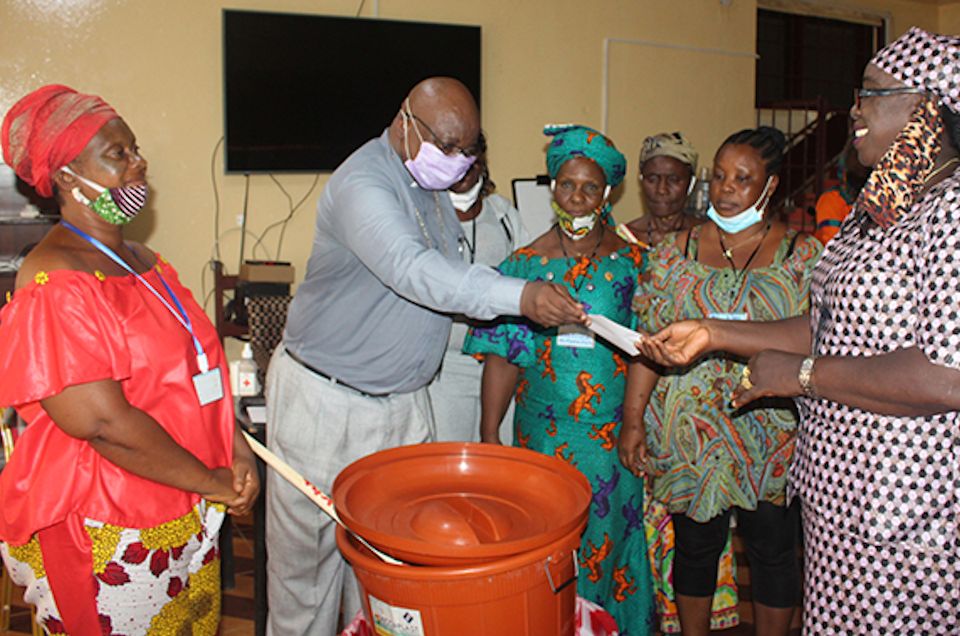 The Rev. Dr. Matthew A. Jaiah of S.T. Nagbe United Methodist Church presents a voucher of $350 to women of the Monrovia District on behalf of the leadership of United Methodist Women in Liberia. The seed money will help the women kick off the Village Saving Scheme in their area. ~ UM News/E Julu Swen

UMW in Liberia is training women to make soaps and sanitary pads to generate income and provide needed products in rural villages.

United Methodist Women in Liberia rolled out a quick impact project intended to help women of the church deal with the financial hardships brought on by the COVID-19 pandemic.

“While we are waiting for the government and other partners to intervene in our situation, we want to help ourselves in facing the challenge head-on,” said Muriel V. Nelson, president of the women’s group in Liberia.

Fifteen women, five from each of three districts (Monrovia, Kakata, and St. Paul), participated in the initial weeklong training to prepare them to implement the “Village Saving Scheme” project at the local level.

Each group will work together to make soap, detergent, and sanitary pads for women and girls. Nelson said the products would be sold at a very reasonable cost to ensure that people in rural areas can afford them.

“We understand the economic hardship in our country. That is why we are using our own members to make these products right where the people can reach them and buy them,” Nelson said.

She said UMW would provide the training and raw materials to make the products, with funding from Methodist Women in Britain. The group provided about 1,500 British pounds (nearly $2,000 U.S.) as seed money for the project.

Each group received $350 to start the process. Nelson said the leadership of the three participating districts signed for the initial money, which they are expected to return after six months.

“They will keep the profit generated from their investment for the onward continuation of the project,” she said, noting that once the initial seed money is returned, it will be given to other districts to implement the empowerment program.

Nelson told United Methodist News that the money was the first of its kind from the Methodist Women in Britain.

“We will ensure that this money is properly invested and the returns will help us with most of our ministries,” she said, adding that some of the funds raised will go toward the construction of women’s villages in the three regions of the conference.

“(The facilities) will house a national women’s office, a rehabilitation center for abused women and girls, and a skills training center for women. United Methodist Women in Liberia have secured a total of 90 acres of land around the country,” she said.

Dede Dolopei, one of the facilitators and a trainee in soap making, said her skills are saving her money that she can now spend on other family matters. “I make my own soap for home use, and I am not spending money for soap since the training,” she said.

Already, the St. Paul River District women are implementing the project in three counties where they have a local church presence. District UMW president Josephine Snorton and lead training officer Oretha Goyanvator have rolled out the Village Saving Scheme in Bomi, Cape Mount, and Montserrado counties.

Snorton said the trainers help the local women to make the products, which include liquid and powder soap and detergent during the training week.

“We leave the products with them to sell, keep the profit and return the invested money to the district for onward transmission to the leadership of the United Methodist Women in Liberia,” she said.

The project is expected to be rolled out in waves in the rest of the 18 districts of the Liberia Conference.

~ The Liberia Conference of The United Methodist Church is a covenant partner of The Michigan Conference.