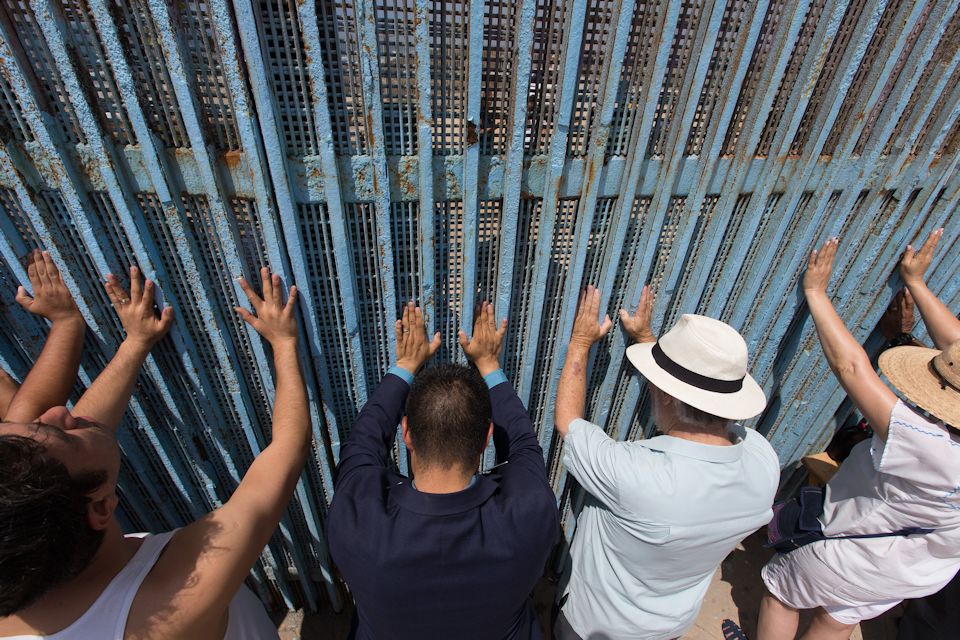 The Revs. Joel Hortiales (center, in blue blazer) and David Farley (to Hortiales' right) join parishioners of the Border Church in Tijuana, Mexico, as they lift their arms skyward beneath the fence that marks the border with the U.S. ~ UM News photo/Mike DuBose

The current public discussion of racism toward Black people in the United States is much welcomed. However, other people of color must not be overlooked.

Latinos are among those who have been largely ignored. Yet, Latinos are also subject to the pain and consequences of racism, systemic racism, and dark history of marginalization and violence. The El Paso massacre at a Walmart store last year is an example of the violence that has brought fear to the hearts of Latinos across the nation.

The border wall, promoted and endorsed by many, cuts deeper than simply serving as a national boundary. It is more than a physical wall between the United States, Mexico, and the rest of Latin America. The wall reflects and is symbolic of the fear many white Americans have toward Latino immigrants, and by extension, other Latinos living in the United States.

The accompanying public disdain and negative attitudes toward Latino immigrants affect the Latino population across our nation. Latino immigrants have gone into hiding once again, and the other Latinos who are not hiding experience suspicion and are often perceived and treated as unwelcome immigrants.

At the core of the anti-immigrant attitude and treatment is the sense of white superiority, fear of the foreigner, and how immigrants will change the culture of this nation. In other words, the fear of the minority becoming the ethnic majority fuels much of the actions and attitudes against immigrants and Latinos who bring with them their language and cultures. The wall symbolizes fear and separation, a physical barrier that speaks volumes about how Latinos are perceived and treated. They are viewed as foreigners and, therefore, different; they do not belong here. The fear is that Latinos will change our communities and nation.

Such broad fear and pushback toward Latinos is an injustice, and it challenges the core values and beliefs of our Christian foundations.

Such attitudes and actions are not new. History reminds us of Manifest Destiny and how it led to the conquest of the Southwest and the grabbing of territory along the way, both Native and Hispanic, imposing white American culture, religion, and social /political structures. Manifest Destiny is solidly founded on the notion that the white American population was God’s chosen people, called to conquer, populate, and control the continent. Historically, Hispanics experienced lynching, racial oppression, segregation, and social/political marginalization.

The church was an integral part of Manifest Destiny as it bought into the notion that the populations encountered along the way were not only racially inferior, but their religions and cultures were as well. Roman Catholicism was defined as an inferior and ignorant religion, and thus it was important to convert the Latino population to Protestantism. Protestantism was brought into the conquered territories, first as a service to the Anglo population, and then later as a mission to populations already here. Missionary work was meant to convert Hispanics and as a means of acculturation.

As The United Methodist Church, we are challenged by our history of racial and ethnic separation. Although language played an important role in developing separate structures and congregations, the church has been an integral player in white flight, as Anglos and congregations fled their old neighborhoods, resulting in those neighborhoods becoming poor barrios.

Rather than embracing the new Latino arrivals, many churches simply ran away from the new population seeking whiter areas in the suburbs. Instead of adjusting to the new realities of urban neighborhoods transitioning to more diversity, the church abandoned these areas and sought more compatible white areas.

Some suggest that such church action was not racist, nor were its members racists, but that the church was simply following the next generation of people moving to the suburbs. It was reconnecting families as an effort to survive. Conversion was perceived and promoted as part of the evangelization mandate.

Our church has indeed taken steps to respond to racial issues by establishing agencies and integrating staff at the national level. At both the conference level and in local churches, the church has initiated “Hispanic ministries.” However, many of these initiatives continue the separation of our past. And the church has dragged its feet.

Addressing racism requires more than resolutions and specialized minority ministries. Overcoming the sense of white superiority will require the broader United Methodist Church to look inwardly as congregations and as connectional structures. This is not a simple call for statements of repentance but a call to take intentional steps of fully embracing the Hispanic population — especially the immigrant.

The church must go beyond public statements of support and justice, given what is happening in our streets today. The church cannot live in blind denial. The church should not go from the assumption of white superiority to white dominance. It must enthusiastically embrace God’s diverse creation and our human community as one family as its guiding theological and social principles.

This will require a new heart and a renewed spirit, rejecting the past and embracing the present and future reality in which God’s diverse creation will be celebrated and lived daily.

~ Maldonado is a retired elder from the former Rio Grande Conference and Perkins School of Theology. He and his spouse, Charlotte, live in Albuquerque, NM.