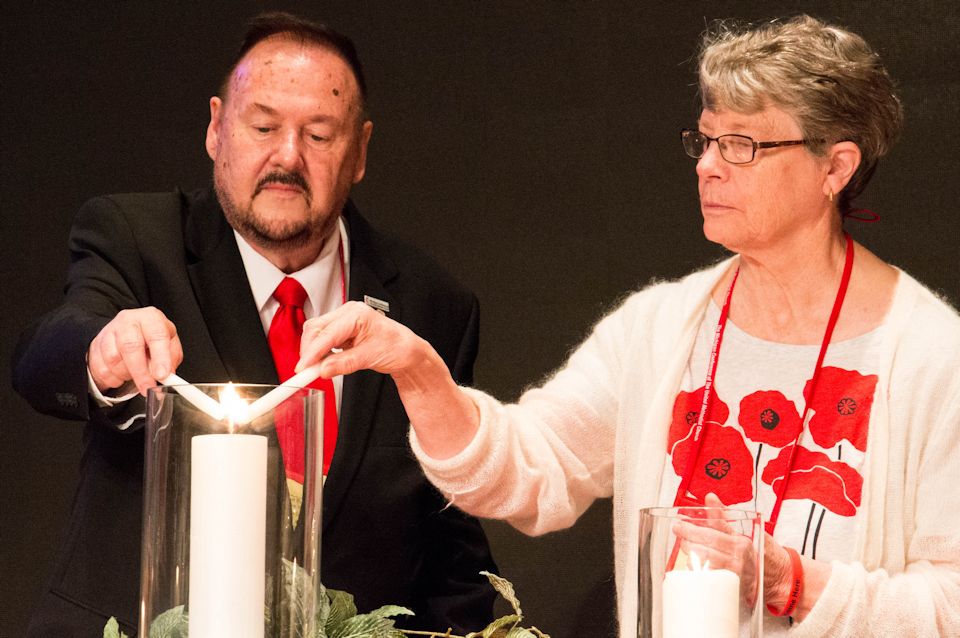 Anne Soles and John Wharton, lay leaders for the West Michigan and Detroit conferences, participate in a uniting ceremony at the close of the 2018 Michigan Annual Conference. ~ mic photo/Hannah Hazen

“We bicycle forward. Nothing is standing still,” says Michigan Lay Leader Anne Soles. She surveys the changes taking place in the church and the nation.

Last week’s windstorm sent a 75-year-old white pine in our front yard into the arms of white oak twice its age. We picked up branches and talked with neighbors and others out to see the damage –all at a social distance, of course. Then, we looked up.  Once you planted your feet, craned your neck, and looked straight up, it looked like someone had thrown the pine like a javelin. The oak had caught the toss before it hit the front porch.

We dubbed it the “widowmaker” and added it to the list of risks and crazy actions that have been coming at us for the last three months.  Water over the seawalls, restaurants closed, a teacher as one of the first COVID cases, masks at the post office, nursing homes closed, sheltering in place. You know the litany. That morning on the street, a neighbor –a kind of occasional Christian—asked where in the Bible do we find the plagues. Which brought a laugh, until another neighbor in the truck that had stopped noted that he did have fish stranded on his dock, if that counted.

I reached my “sell-by” date as Michigan Conference Lay Leader this month. Bishop Keaton, West Michigan Conference, Fuller Avenue Conference Center or conversely, Adrian College, meetings in Flint and the Detroit Conference with special emphasis on the Upper Peninsula. You remember. Or maybe you don’t. We bicycle forward after all. Nothing is standing still.

As changes come – and come they have, they will, and they do—it is best to be in motion, legs flexed and ready to move. Bishop Kiesey assembled leadership from both halves of her two-point charge, West Michigan and Detroit Conference, to a day-long meeting to talk about creating a new conference. On the day after the meeting, she invited a smaller group to talk over the session. Coming a few minutes early, I found Twyla, the facilitator from Iowa, starring at the large laminated map of Michigan in the cabinet room. “I don’t think it is going to work!” she said. “For one thing (and gesturing with both hands to make a map of Michigan), I didn’t realize the Upper Peninsula ran so far west! (and she pulled the UP hand back into position directly over the Straits).  Iowa is just a box!”

It did work, and it was work. We have been living into the need for change ever since. The ending point was just a beginning.

General Conference 2019, a Special Annual Conference in March 2020, and now floods in Midland, Black Lives Matter, and COVID-19 changed the agenda again. Virtual worship, mask making, unemployment, and the drumbeat of the nightly news urge us on. As my neighbor noted, there are larger forces at work in our society. We are finding fish on the dock and trees in the trees. We know way too much about ventilators, vaccines, and tasers.

While we have social distancing, we can feel a tightening of the social fabric. My teenage grandchildren went to a protest, feeling pulled away from their I-pads and into the community. If you had raised that hope a year ago, parents and educators would have simply rolled their eyes.

At the same time, nursing homes are helping residents with Skype, ZOOM, and Facetime while grandchildren help parents (and pastors) connect. Not long ago this generation bridge would have been dubbed “a bridge too far.”

John Wesley talked about private acts of mercy and public acts of justice as the General Rule of Discipleship. Lay members watch as private mercy moves toward public justice. Naomi Garcia, a leader in congregational vibrancy, introduced me to the Coaching project this week, including a text, “The Next Great Awakening” by J. Val Hastings. Throughout the session, we worked on listening and empowering.  Here were the skills of mercy and the acts of connection. I came away thinking that this person-to-person work was the granular base of our charge “make disciples for Jesus Christ for the transformation of the world.” This is the person-to-person work of the laity that creates and repairs the fabric of the community.

In the Second Great Awakening, my 3rd great grandfather as a twenty-something in Upstate New York, “investigated” the Fox Sisters who were holding the first Spiritualist meetings near his home. Turns out the sisters could make spiritual “signs” by thumping loose floorboards and cracking their joints under those long 1850’s skirts. In times of change, his neighbors and his country by 1860 were desperate for meaning and hope. The Methodist movement multiplied by building community fabric, class by class on the circuit. No fakes allowed; how is it with your soul?

In our own times of change, the challenge to the clergy and especially to the laity is to make these same connections in mercy and repair the fabric of the community in justice. We can find the isolated, bring food, flood buckets, and internet connections to our neighbors. We can seek out injustice, stand and be counted, and call out those who are just cracking their toes under their skirts (or misusing Facebook, dividing us into tribes and bulldozing the load-bearing walls). Discipleship has its clear challenges. Every lay member comes with a toolbox to be used.

It has been an honor to be a part of this journey of adaptive change as your Conference Lay Leader. Wrong turns, blind alleys, and occasionally we did not stop for directions. (There’s a saying inWest Michigan: You can tell a four-wheel drive. It’s gone further into the cornfield in a snowstorm.)

My grandfather moved to Michigan and brought his talents with him.  I was lucky; I am already here.