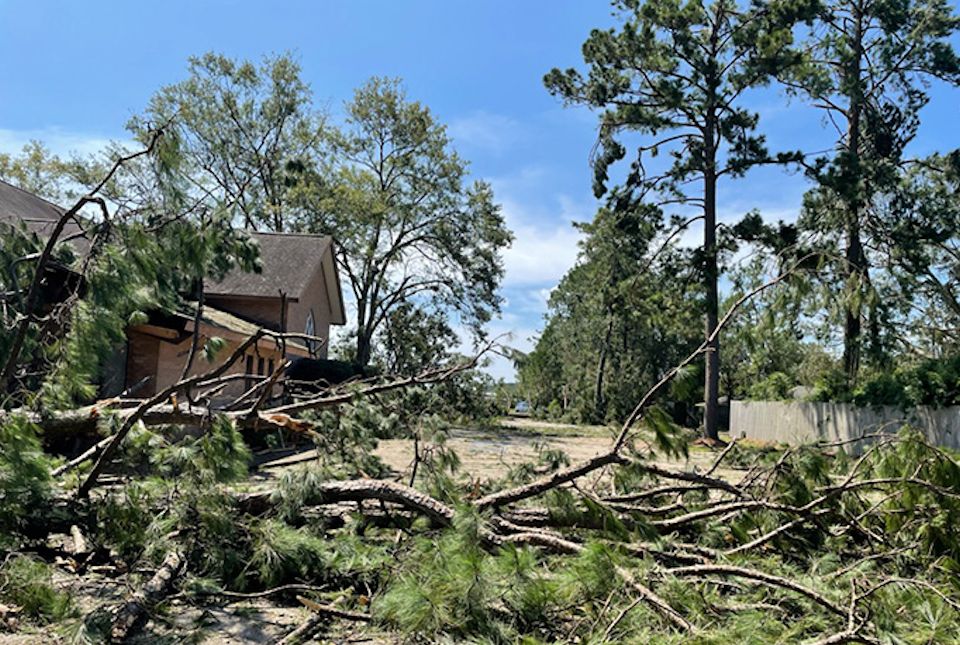 Bishops Cynthia Fierro Harvey has been without electricity or internet since the storm. But she’s had enough reports to know that United Methodist structures in southeast Louisiana took a hit from Ida.

The Revs. Michelle and Jason Harris, a clergy couple, serve United Methodist churches that took a direct hit from Hurricane Ida as it moved with devastating force through southeast Louisiana earlier this week.

St. Charles United Methodist, in Destrehan, had three buildings before the storm. It’s pretty much down to two.

“The Sunday school building — it’s a total loss,” said Michelle Harris, St. Charles’ pastor. “The roof blew off. We’ll lose everything in that building, and the whole building will go.”

At least she knows her church’s story. Jason Harris was still trying to get a report on his church, First United Methodist in LaPlace, where flooding was severe and many roads remain impassable.

“I’m hoping in the next day or so I’ll be able to get to the church, or somewhat near, to try to assess,” the LaPlace pastor said.

At her episcopal residence in Baton Rouge, Louisiana Conference Bishop Cynthia Fierro Harvey has had to rely on a generator for electricity and has made do with spotty to nonexistent Wi-Fi and internet.

But she’s had enough reports to know that United Methodist structures in southeast Louisiana took a hit from Ida.

“Quite a few churches, parsonages and homes owned by pastors,” Harvey said of the storm’s toll. “We’ve got a spreadsheet working of where all those are. We do see extensive damage.”

Harvey and other conference officials are unaware of any United Methodists who were killed or injured. But in LaPlace and some other heavily flooded areas, search and rescue work continued.

For now, there’s a misery factor that’s impeding a full damage report and any moves toward recovery.

Power outages are widespread, even as the late summer heat and humidity linger. Many people don’t have cell service or internet. Gasoline is scarce.

“You have to make some tough decisions,” Harvey said. “We want to get out to those (hard-hit) areas, but I don’t want to take fuel from responders.”

The Rev. Drew Sutton and his family evacuated from Hammond, Louisiana, just northwest of New Orleans, to Baton Rouge. But he kept in touch with members of First United Methodist Church in Hammond who rode out the hurricane as it passed through late on Aug. 29 and into the next morning.

“From about 12 to about four in the morning, from what I heard from many people, it was the worst night of their lives,” said Sutton, pastor of the Hammond church.

The church members he’s talked to all had house damage, and the church itself will be unable to meet inside for a long while.

“We have over 10 trees down, with four of them hitting the building,” Sutton said.

The Rev. Colleen Bookter also evacuated farther north in Louisiana, at the conference’s urging. But she’s been checking on the church she leads, St. Luke’s United Methodist Church in New Orleans’ Lakeview neighborhood.

“The church is faring much better than in (Hurricane) Katrina, which is wonderful,” said Bookter.

But St. Charles does have water damage from leaky ceilings and leaky stained-glass windows. That was reported to Bookter by 80-year-old church member Bonnie Johnston.

Bookter expects power will be out for some time in her part of New Orleans.

“We have a courtyard we can worship in,” she said. “We’re going to be OK.”

First United Methodist Church in Long Beach, Mississippi, on the Gulf Coast, came through with minimal damage and has been handing out roof tarps, including for houses nearby that still had tarps from a previous storm but lost them to Ida, said the Rev. Jon Kaufman.

His church is eager to help southeast Louisiana.

“We’re going to be asking our people to donate water, Gatorade, food and cleaning supplies, which we will take over as soon as possible,” Kaufman said. “We’re organizing work teams as well.”

Harvey and Mississippi Conference Bishop James Swanson Sr. both stressed that it’s too early for response teams to begin helping churches and communities, given that damage assessment and prioritizing continue — and that traveling conditions and overall living conditions are tough.

The Louisiana Conference has a disaster response fund. The United Methodist Committee on Relief helps with long-term recovery after disasters and accepts donations for its work.

“UMCOR is currently assessing Hurricane Ida’s impact and widespread damage in coordination with the conference disaster response coordinators and has awarded a grant to the Louisiana Conference to support initial relief efforts,” the agency said in a statement.

UMCOR’s Sager Brown Depot in Baldwin, Louisiana, a hub for supplies for relief operations, appears to have come through the hurricane OK, the agency reported.

The Alabama-West Florida Conference announced that it has early response teams ready to help with debris removal in southeast Louisiana, including mucking out houses and applying tarps — as soon as the green light comes.

Though St. Charles United Methodist in Destrehan lost one building to Ida, Michelle Harris wants the church to be a base for recovery work.

“Our biggest hope is that we’re able to get our two larger church buildings up and running so that teams can come in and help the people in the area,” she said. “We’re very well-positioned.”

Louisiana has had a ruinous stretch of natural disasters, including Hurricane Laura, which hit last August.

“These folks here are resilient,” Harvey said. “They have a lot of experience. They know how to care for one another. But, I will say, we are weary.”