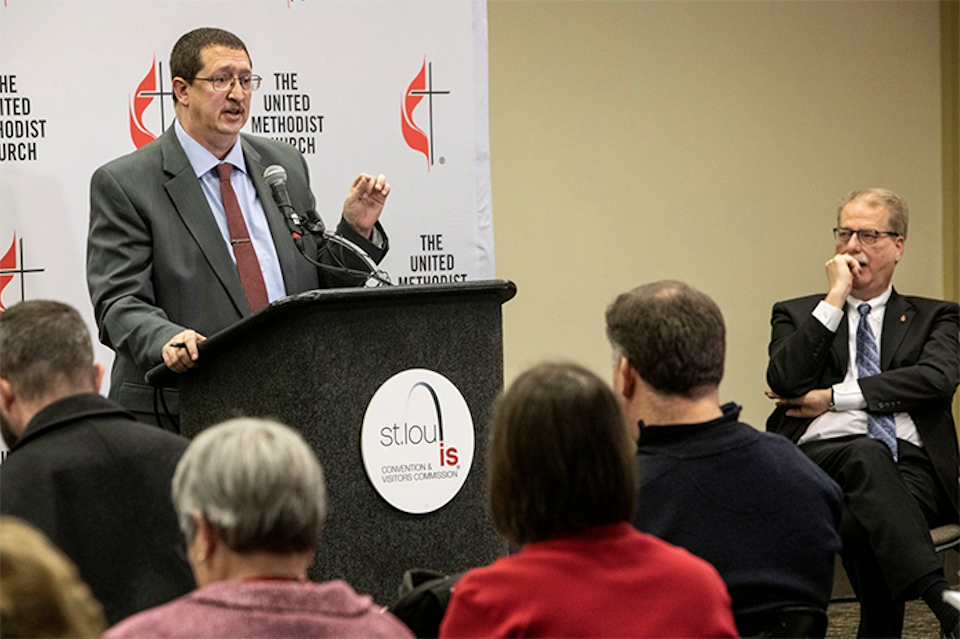 The Rev. Gary Graves, General Conference Secretary, is shown here at the close of the 2019 assembly in St. Louis. Looking ahead to 2022, Graves now says, "

The Commission on the General Conference is monitoring vaccinations, VISA availability, and virus related travel restrictions around the world as they continue plans for a 2022 meeting of the law-making body.

Whether General Conference can go forward next year as scheduled remains a big question mark.

With the more contagious delta variant of the coronavirus surging around the globe, some governments are reinstating lockdowns, and many travel restrictions to the U.S. remain in place. Vaccination efforts also face plenty of obstacles.

However, organizers of The United Methodist Church’s top lawmaking assembly continue to move forward with plans.

The General Council on Finance and Administration board heard an update at its Aug. 20 online meeting about the assembly now scheduled about a year from now.

Sara Hotchkiss, General Conference business manager, told the board in a report that staff members continue to plan logistics to hold the event Aug. 29-Sept. 6, 2022, in Minneapolis.

The business office staff “understands the importance of meeting in 2022 to the denomination,” Hotchkiss reported.

After decades of intensifying debate over the status of LGBTQ people in the church, the coming General Conference faces multiple proposals to divide the denomination along theological lines. All were drafted before COVID-19 became a household word.

The most endorsed of these proposals is the Protocol of Reconciliation and Grace Through Separation. If adopted, the protocol would allow traditionalist churches and conferences (those that support restrictions on gay marriage and ordination) to leave with church property and $25 million. The proposal also sets aside $2 million for other groups of churches that might leave.

All seemed set for delegates to take up the protocol at the coming General Conference, originally set for May 2020. But then the COVID-19 pandemic shut down international travel and shuttered meeting venues.

Closures at the Minnesota Convention Center initially forced the Commission on the General Conference to postpone the big meeting to late August this year.

In the meantime, the commission named a technology team to investigate virtual meeting options. However, the team’s report identified several challenges to such a conference, including a 16-hour time difference among delegates, unequal internet availability and the difficulty in safeguarding voting.

The continuing COVID-19 menace led the commission to postpone a second time until 2022.

In the meantime, the Wesleyan Covenant Association — a traditionalist group — is moving forward with plans to form a new denomination, the Global Methodist Church. Congregations on both sides of the theological spectrum also have disaffiliated from The United Methodist Church.

The General Conference commission has not met since February, when it postponed the big meeting a second time. Nevertheless, the work is ongoing.

“We continue to monitor the COVID numbers as well as vaccines in the areas of the world our delegates live,” Hotchkiss told United Methodist News in an email after the meeting.

“We are also monitoring the U.S. embassy availabilities for visa appointments.”

The coming General Conference has 862 voting delegates — 55.9% come from the U.S., 32% from Africa, 6% from the Philippines, 4.6% from Europe and the remainder from concordat churches that have close ties to The United Methodist Church.

At present, the U.S. is still suspending most travel from 33 countries including much of Europe, the United Kingdom and South Africa — which all send voting delegates to General Conference.

Per-Endre Bjørnevik, a GCFA board member from Norway, told the board that those current travel restrictions give him pause. He is chair of the board’s Connectional Outreach Committee that works with the General Conference staff.

“I don’t know if it would be possible for Europeans to meet at General Conference face to face,” Bjørnevik told the board. “That remains to be seen.”

The U.S. is seeing high transmission of the delta variant across the country and death tolls again averaging about 1,000 people a day.

While vaccines have proven effective in reducing the spread and preventing serious illness, distribution has varied widely between rich and poor countries. Vaccine hesitancy also remains a problem.

“There is a great deal of misinformation about the side effects of the vaccine all over the world,” Hotchkiss told UM News. “While there are supply concerns in some areas, there are also places that are throwing away vaccines because they cannot get enough people to get a vaccine.”

Many hope the Food and Drug Administration’s full approval of Pfizer-BioNTech’s COVID-19 vaccine on Aug. 23 will lead to fewer holdouts in the U.S.

The Rev. Anthony Tang, a GCFA board member and reserve delegate from the Desert Southwest Conference, asked whether it was possible for The United Methodist Church to provide all delegates around the world with vaccine access.

The Rev. Gary W. Graves, the General Conference secretary, told the board that organizers are considering how to ensure delegates’ access to the vaccines, among other matters.

“But there are many limitations, and we are exploring what they are,” Graves said.

The late summer 2022 schedule eliminates the day off delegates usually get between legislative committee work and plenary time. The new schedule also has one less day of meeting time.

“More information will be available about the agenda after the commission sets the agenda in early 2022,” Hotchkiss told UM News.

At its Aug. 20 online meeting, the General Council on Finance and Administration board also:

In addition, the board disposed of residual assets from the General Church Retirement Plan. The benefits plan, established to support the spouses of employees in the former Evangelical United Brethren Church, has fulfilled its obligations and has $81,988.74 remaining.

The board voted to distribute those remaining funds to the Oklahoma Indian Missionary Conference for support of their salary, pension and benefit costs. The missionary conference receives support from the denomination’s General Administration Fund and faces a decline of $302,000 or 18% in the proposed budget going before General Conference.

“We are so thankful to the General Council on Finance and Administration for the generous donation to the Oklahoma Indian Missionary Conference,” the Rev. David Wilson, assistant to the bishop in the conference, said in a statement after the board meeting. “These funds will further the work of the dedicated clergy of our conference who serve God and the people of OIMC with great love and service.”

Read previous coverage on the state of the Episcopal Fund that supports the work of bishops.