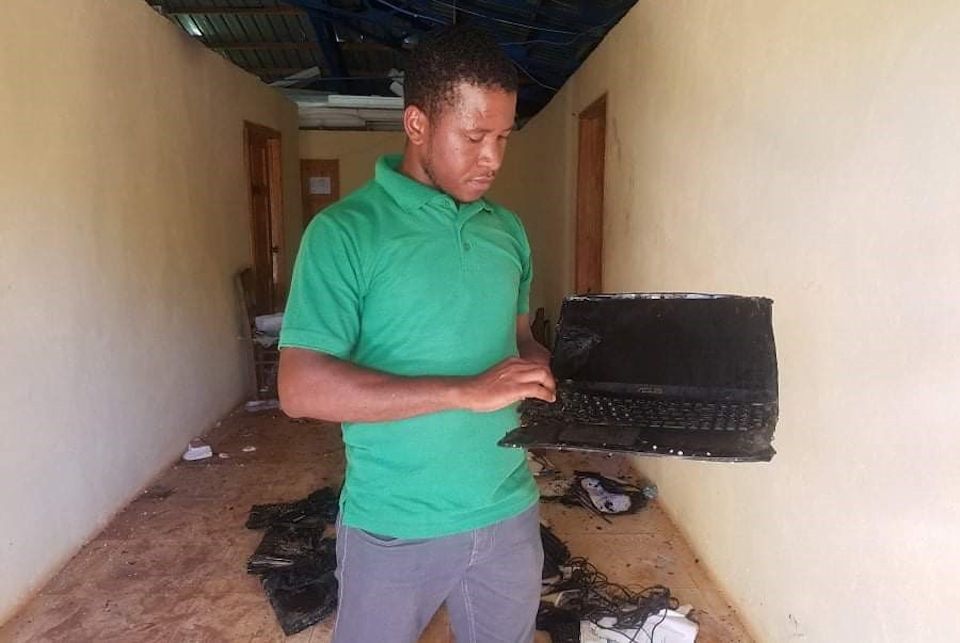 Mario Damis, Coordinator of HAPITech, the vocational training center of Haitian Assets for Peace International, surveys the pile of 15 laptops destroyed when their safe storage room burned in the early morning of July 6. His first priority is restoration of HAPI's internet to aid communication during this troubled time. ~ photo courtesy Valerie Mossman-Celestin

Michigan Conference Covenant Partners in Haiti need our prayers as the country faces uncertainty after the assassination of President Jovenel Moïse on July 7. This follows a fire at HAPI the day before.

Tropical Storm Elsa hit the southern coast of Haiti on July 3, downing trees and tearing roofs from buildings on its way across the Caribbean. Inland at Mizak, home of Haitian Assets for Peace International, Elsa knocked out the wifi. Residents considered themselves fortunate in comparison to hurricanes past. Their relief was short-lived.

Within a 24-hour period starting July 6, a fire destroyed resources used by HAPITech’ computer lab. As the damage was being assessed and a plan for recovery put in place, news then broke of the assassination of President Jovenel Moïse. In recent months, unrest in the nation had driven persons to the mountain-top community of Mizak, seeking training, health care, and safety from violence in the population centers. Those in Mizak are now fearful of what happens next.

A fire in the early morning of July 6, 2021, destroyed a portion of the Merlet Center in Mizak. Valerie Mossman-Celestin, U.S. Executive Director of HAPI, received a phone call at her home in Michigan, reporting on the blaze. At 4:30 am, a guard discovered the upper portion of the building was burning while preparing to start the generator for the day’s operation of the Felisane Health Clinic and HAPITech training center.

When he raised the alarm, neighbors formed a bucket brigade, and the flames were put out before the entire structure could be destroyed. The secure storage area, containing 15 laptops, two routers, and other computer components, was a total loss. Also lost was a cash box containing over $5,300 USD, mostly pharmacy money and some operating funds. Several computers were used by staff, but most were used by students enrolled in the HAPITech computer course. Losses in cash and equipment are estimated at $15,000.

The cause of the fire remains unknown at this time. However, the power array is suspect. “We have been struggling with an aging energy system for some time, “Celestin said. She explained that solar energy collected during the day is designed to power the center 24/7. However, the batteries died, and it has been impossible to secure new ones. “Replacement batteries are available in the city, but gangs have erected roadblocks and they confiscate all supplies being transported anywhere,” Celestin explained. “We simply could not risk transporting $10,000 in batteries.” HAPI has been relying on a propane-run generator. “We are lucky the propane tank did not blow in the fire,” she added. “Thank goodness there were no injuries and the whole building was not destroyed.”

Clean-up of the destruction was delayed until a judge could investigate the incident during the afternoon of July 6. The judge asked if arson is suspected but those on the scene said that it is not. The judge requested that the area remain intact until the issuing of his report.

An engineer also did a preliminary inspection of the building but said no testing could be done on the electrical system until further clean-up of debris was done. He was unable to ascertain the structural integrity of the building. Celestin said power will be left off until everything is tested.

Celestin has made the restoration of the internet a priority to facilitate communication. “Text messaging with random availability across two languages is difficult,” she commented, “but we are glad to have that moving forward.”

At the present time, the clinic is continuing to receive patients. Resident physician, Dr. Lauture, said, “The fire is a great loss to HAPI.” Almost half of the money consumed in the fire was to be used to provide lab tests, pay the lab technician, and stock the pharmacy with medications and consumable supplies. “Moms coming to us receive free medications as part of their participation in Start Right,” Celestin shared.

Mario Damis, Coordinator of HAPITech said, “HAPITech is the only place in Mizak that offers a computer course of world-class quality because of our computer lab. Unfortunately, this incident burned all our resources. Our laptops and network equipment are gone.” He added, “This will profoundly impact the students who have already started the program. They are really motivated.” Celestin added, “Those students could seek training elsewhere. But gas prices are $12 a gallon and they would be at great physical risk traveling to the city.”

Turmoil in Haiti has grown in recent months. Gang violence has displaced many. That instability has created movement of people away from the cities and into the rural areas to escape the attacks. During this time HAPI has seen an increase in those seeking training and health services. “We had 35 students at HAPITech,” Celestin reported, “and that number jumped to 100 a year ago, because of fear of going to Port- au-Prince.” She said the number of women coming to the maternity clinic is “snowballing.”

“Ironically, the gang warfare that is driving demand to our doors is the same force that is paralyzing our efforts to replace the power bank and other critical supplies that serve our growing population,” Valerie stated. “With the news of the presidential assassination, my fear is a bloodbath between opposing gangs in this power void. This will place additional stress on scarce resources as it further disrupts the flow of food and fuel.”
She describes the interplay of recent developments. “Rural communities in Haiti rely on not only the diaspora to wire funds but also on family members who work in Port-au-Prince in the formal economy. Haitians rely on gardens, which were just flattened in Hurricane Elsa’s winds. These ‘channels’ for cash flow are collapsing. As more individuals flee the city for refuge from violence, the economic condition worsens. We are seeing physical evidence of this in higher rates of malnourished children and pregnant women. Then the fire just wiped out our pharmacy fund, technology, and compromised our ability to respond rapidly.”
Haitian Assets for Peace International is an Advance Special of the Board of Global Ministries of The United Methodist Church and an Engage MI ministry partner of The Michigan Conference. United Methodists are in prayer for the Methodist Church of Haiti, the country, and Haitian brothers and sisters in Christ.
The Michigan Conference