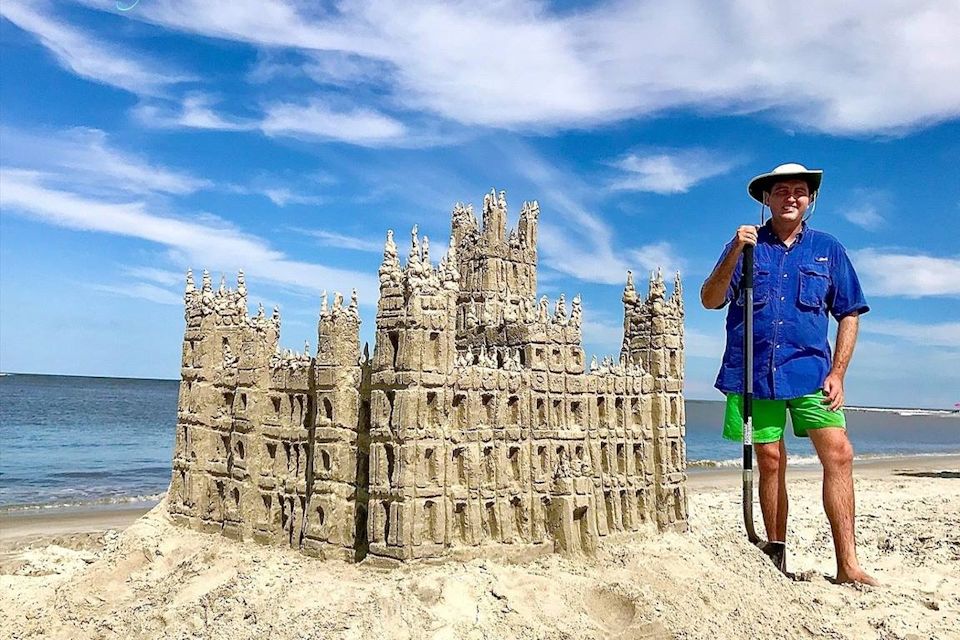 Dylan Mulligan, the Georgia Sandman, built a replica of Highclere Castle, known to the world as Downton Abbey. This creation, built at Gould's Inlet on Saint Simons Island, GA, took a total of seven hours and contains over 100 gallons of water. ~ photo courtesy of Dylan Mulligan

Dylan Mulligan loves to build sandcastles. For this Georgia Sandman, his handiwork is “more than an activity I enjoyed. It became about taking that talent to glorify God.”

Most weekends, Dylan Mulligan can be found surrounded by skies and sea, relishing in all that God’s Hand has wrought, whistling his favorite hymn, “This Is My Father’s World.”

Mulligan builds sandcastles, a hobby the lifelong United Methodist has pursued for more than three decades. Through the years, Mulligan has come to realize that what some might call child’s play is his God-given gift.

“The Lord gives everyone talents,” Mulligan says. “When I realized how much people enjoyed my creations, building sandcastles became about something more than an activity I enjoyed. It became about taking that talent to glorify Him.”

Hours spent building sand structures present opportunities to talk about his faith, as admirers often question Mulligan on how he can build the intricate castles.

“It’s nothing but the Good Lord’s blessing,” Mulligan always replies. “A human being could not take a pile of sand and turn it into something like that.”

Mulligan has been mixing piles of sand with buckets of water since he was four. Back then, he built drip castles. “The mud drips out of your hands and gradually builds,” he explains. The youngster graduated to small hand stacked towers and walls and, as a young adult, learned to build larger towers and walls.

Claiming he’s no professional, he says he occasionally watches videos of professional sandcastle builders. Mainly, though, trial and error were his teachers. “I figured out what worked for me,” adding that his instruments involve water buckets, shovels, PVC pipe to shape towers, and carving tools.

Mulligan’s creations have included replicas from around the world, including well-known Georgia structures, such as The Cathedral of Saint John the Baptist in Savannah, GA, and the University of Georgia School of Law, where Mulligan, an attorney, attended. In addition, he recently built Highclere Castle, known to the world as Downton Abbey, from the popular TV series of the same name. 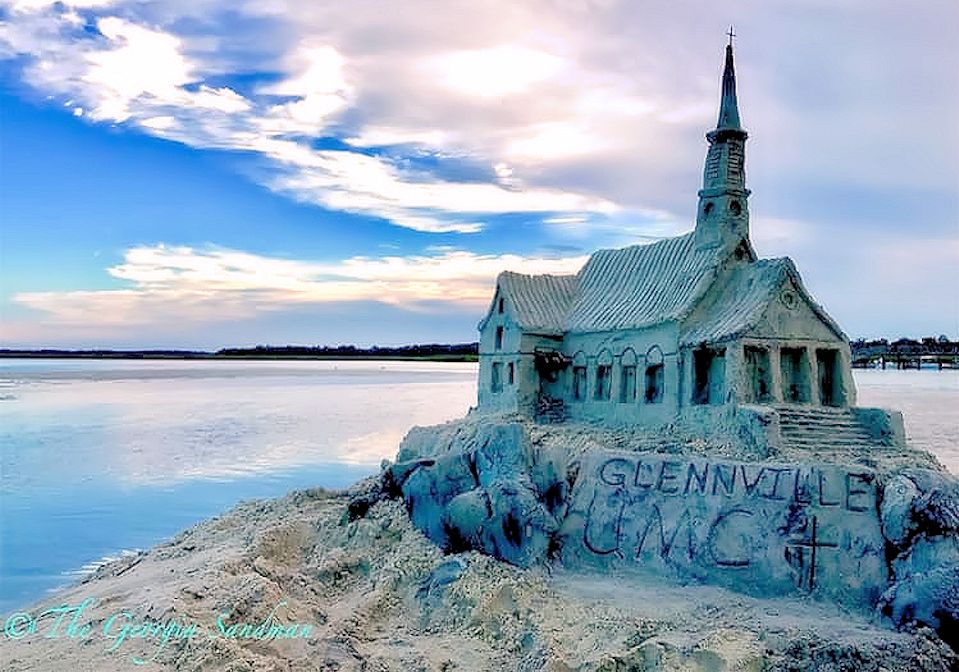 On the day Mulligan planned to build his beloved church, he headed to Contentment Sandbar on the Julienton River in Shellman Bluff, GA, where his family has a vacation home. After four hours, Mulligan was admiring his newly-finished creation, one in which he spent time getting the steeple just right and hand fashioning the cross out of marsh grass. Then the weather changed.

“All of a sudden, the sky got black, and the wind kicked up and snatched my bucket and hat down the sandbar,” he says. “About that time, the wind knocked the steeple down. I was heartbroken.”

As he headed to the boat, it began to rain. “Rain is just like pouring a bucket of water on the sandcastle,” he explained. “I knew when I left the sandbar nothing would be left of the sandcastle when I got back.”

Thirty minutes later, the storm passed, and Mulligan returned to survey the damage.

“Lo and behold, it was still standing,” he exclaimed. “The direction of the storm and the way the wind was blowing, the rain all hit the backside of the church. However, the side that people saw and all the details were untouched. No damage to it at all.

“To come back after a massive storm and find that it was standing perfectly,” Mulligan marvels, “that sandcastle took on a special meaning.”

Mulligan rebuilt the steeple and made a few repairs before taking photos of the sand version of his home church, which he posted on The Georgia Sandman Facebook page.

“This house built of sand, unfortunately, would not last long,” he wrote on Facebook. “However, that wonderful, beautiful Methodist church built on South Caswell Street in Glennville, GA, still stands upon Christ, the solid Rock, and will never sink beneath the waves.”

Relinquishing his sandcastles to the inevitable tides each day has taught Mulligan an important spiritual lesson.

“Nothing on earth is permanent, especially if you’re building on sand,” he says, referencing Jesus’ parable of building on rock and not sand (Matthew 7:24-27). “When I started making that biblical analogy, it changed my outlook. I’ve come to the point now when I build it, and I just enjoy it. I know the tide is going to destroy it. There’s no point to try to protect worldly things.”