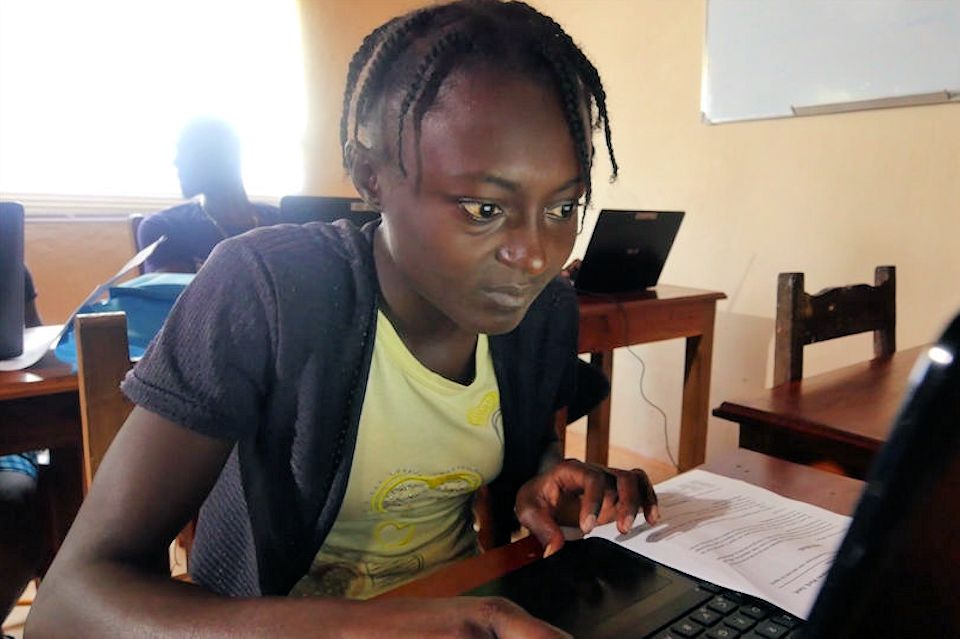 HAPITech provides training for young people in Mizak, Haiti. It is part of the vision of empowerment, peace, and hope offered by Haitian Assets for Peace International.

Haitian Artisans for Peace International began in 2007 as a women’s handcraft collective. Today HAPI stands for Haitian Assets for Peace International, reflecting the growing number of ways that the organization has grown to meet the needs of women, men, and children in the community of Mizak. The first expansion involved healthcare—the most recent, job training.

An article appeared in the February 9, 2021 edition of The Haitian Times titled, “What Vocational Schools are Accomplishing in Haiti.” Writer J. O. Haselhouf features two of the nation’s schools, one of which was HAPITech.

Haselhoef quotes HAPITech Coordinator Mario Damis on the prospects for a well-run, efficient college. “Folks will come. HAPITech may deal with 500 students.” If funding for scholars could be found, Damis said, “I can make it happen.”

After describing the programs at HAPITech and L’Ecole Vocationelle de Duchity, the author notes, “If the need in Haiti is to train workers, these two schools are fine examples. They offer classes to meet the perceived needs of the job market and graduate students, adding to the number of trained people in Haiti.” She then adds, “If the need, however, is to immediately employ graduated students in their field of training, success is difficult to evaluate … The Haitian economy shrank in 2020, and foreign investors continue to shy away.”

Since the article’s publication, Valerie Mossman-Celestin, U.S. Executive Director of HAPI, addresses that concern. “Mario is starting a tracking program,” she said. “We do know that some students have found at least contract jobs or incorporated their new skills into existing jobs.”

Capacity building is at the heart of HAPI and HAPITech. What is capacity? Valerie defines it this way. “Capacity development is the process by which individuals are helped to gain skills, knowledge, tools, equipment, and resources to become more able and effective in life.”

Valerie explains, “The seed for HAPITech was planted in 2011 when I traveled to Haiti to do a documentary on girls in the country. One of the recurring themes from our interviews was that families were willing to sacrifice to send a boy for education beyond high school but that girls were ‘a burden.’” Girls were expected to “get a job or get a husband,” as expressed by one father.

Because of the high expense for travel from Mizak to university options in Port-au-Prince or Jacmel, HAPI decided to add a vocational school with a preference for women students. “We floundered the first few years trying to adhere to a strict 50% ratio of women to men. Local jobs are skilled trades that don’t fit traditional gender roles and norms for women.”Today HAPITech enrollment stands at 30% girls, including a few studying ceramic tiling. HAPI offers scholarships based on financial need, not gender.

Valerie emphasizes that HAPITech is no hand-out. “We expect any student who can contribute to contribute.” Many HAPITech scholars pay 50% of the fees. “We really try to emphasize that we –international donors, local staff, students — all do our part. HAPI does not want to reinforce a dependency, charity mindset.”

Two hundred Mizak residents will take a survey this summer to help with future curriculum development. “People are usually interested in more vocational skills like plumbing or window installation,” Valerie says. “We must also weigh the needs of young women into any new course offerings.” She shares that “Mario works hard at educating young people on the value of technology to drive interest in expanding IT courses. But it’s a difficult sell as most local young people can’t see that as a tangible option for them living on a mountainside in rural Haiti.”

Valerie describes the original hope for HAPITech. “We wanted to teach business and prepare future leaders for all sectors of Haiti, but it has been hard to generate interest. Business administration or entrepreneurship do not pay a quick return like learning electrical installation or tiling floors and showers.”

To illustrate the need for a business curriculum, Valerie states that non-Haitian internationals lead all 11,000 NGOs in Haiti. Further, 0% of foreign aid in the first year following the 2010 earthquake went to a Haitian-led organization. “Haitians need solid business skills in project management and best accounting practices,” she says. “But it’s tough to shift from the need to survive to a vision of long-term sustainability in a climate of economic crisis, gang violence, and political instability,” she reflects.

A significant component in a business course involves language. “ESL was originally intended to be a step on the ladder to offering courses in business,” Valerie remembers. So, she invited two Michigan professors to help, Mike Pisani (Central Michigan University) and Paul Hillman (Grand Valley State University).

Valerie recalls, “Mike Pisani first came to Haiti as part of a VIM team out of Big Rapids United Methodist Church. He has a background in international business and microcredit.” Back home in Michigan, Pisani developed a curriculum for International Business students at CMU that assisted HAPI artisans with marketing their products. A second course offered in Mt. Pleasant was titled “Managing Cultural Differences and Diversity in a Global Economy.” The focus was not products but communication. Michigan students would learn cultural agility, and Haitian students would learn English.

Pisani says, “We have partnered for three years now, and Valerie Mossman-Celestin and Mario Damis have been instrumental in making the connection and offering this opportunity for cross-cultural understanding.”

“In 2013, I invited Paul Hillman to participate in a committee to develop a technology plan to support classes at HAPITech,” Valerie states. “It was Paul that assisted in establishing HAPITech’s computer lab.” Upon retirement, Paul traveled to Haiti and became a mentor for Mario Damis.

“Learning English is incredibly important to these young people,” Hillman says, “and they are MOTIVATED.” Paul and others from Grand Rapids: Trinity UMC spent time in the English class in Mizak. “The Haitian students realize speaking English opens up a wider range of opportunities. It was a pleasure to talk with them as they worked on their conversational skills.”

Hillman reports that he recently used Zoom to connect with a two-hour class on business ethics led by Mario. “It’s one of the subjects I teach at GVSU. It covered three items at once. We conducted the entire class in English, as I don’t speak French or Creole. Second, we discussed ethics and its application to real life. Finally, we applied ethical concepts to business situations.”

Paul Hillman says with enthusiasm, “Whenever I teach in Haiti, the students are fully and completely engaged.  They are animated, fun to be around, inquisitive, and curious. Despite any language and cultural differences, they are focused on learning and acquiring new skills.”

In the article in Haitian Times, J. O. Haselhoef concludes, “HAPITech staff may have the logical next step towards improving employability. It wants to offer business classes, hoping its students will begin the new ventures that hire other students. However long that process may take, it moves the thinking and the learning in the right direction.”

That long process will no doubt unfold, one relationship at a time between Haitian students and others in the caring family known as HAPI.