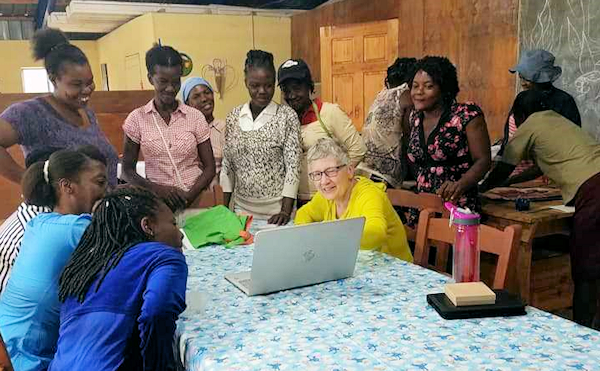 A college professor had an idea. That idea grew into a project that stretches from Michigan to Haiti and back.

It’s a long way between Mt. Pleasant and Mizak. But the miles don’t matter when one travels the internet. Online communication has facilitated a partnership between Haitians at HAPI (Haitian Artisans for Peace international) and students at Central Michigan University.

The relationships began with Mike Pisani, Professor of International Business at CMU. Mike, a member of Big Rapids: First United Methodist Church, is a non-voting member of the HAPI Board of Directors. He also has first-hand experience in Haiti, having been part of two mission teams sent there by Big Rapids: First United Methodist Church. “I had an idea and because I’d been to HAPI and because I know the Director, Valerie Mossman-Celestin, I knew the idea would work,” Mike said.

Together, Mike and Valerie designed projects to engage two of Mike’s classes.

The 16 graduating seniors in Pisani’s International Business Class paired with artisans in a practical, hands-on learning experience. The focus was the product mix; how marketable and profitable were the 20 most popular craft items sold by HAPI?

Teams of CMU students analyzed the break-even points for the items and suggested possibilities for expanding the market. For instance, photos—of products and the artists who made them—were uploaded to Etsy, an e-commerce website specializing in handmade and vintage items. Logistics is another challenge; how do you get products from Haiti to the U.S. other than inside a suitcase of a volunteer traveling to HAPI and back? Mike summed it up: “We took a deeper dive at the products they were creating in order to move from a wholesale to a retail market where they could sell on a piece-by-piece basis.”

Cecelia Kassak was a team leader for the International Business Class relationship with HAPI. She explains, “We separated into over 15 positions and my task was to create the positions, update the group on new information, check in with each position holder to ensure that we were on track with developing our project and updating each individual’s progress.”  She lists an understanding of other cultures, strong communication and a non-judgmental approach as keys to such an undertaking. “Preconceived notions and negativity must be set aside when working with other individuals,” Cecelia adds. “This is how trust and relationships are built between countries.”

Taylor Turnbull was assigned to the Marketing Team. He developed a survey to assess the target audience, considered advertising opportunities, and generally focused on generation of new sales to a larger customer base. Taylor concludes, “HAPI has done an amazing job of training the artisans and paying them well in comparison to normal wages in Haiti. This is impressive even if the project is not totally self-sustaining yet.” Before his classwork Taylor was skeptical that HAPI could become self-sustaining. His opinion changed. “With a little work, HAPI could grow and provide more opportunities to a section of society where the chances to rise out of poverty are few and far between.” Taylor now “believes in HAPI so much” that he applied to continue to help grow the business side as an investment in the artisans’ futures.

Professor Pisani has another class of 20 students titled, “Managing Cultural Differences and Diversity in a Global Economy,” required for those majoring in management or international business. This class’s approach to HAPI was not product-focused but communication-focused. “We thought,” said Pisani, “that we could provide a service for those ESL students at HAPI (English as a Second Language) to practice their English.” CMU students were teamed up with Haitians and challenged with creating and using a virtual platform. Haitians would learn language; CMU students would learn cultural agility. Students were divided into three groups that met with their Haitian counterparts for one hour a week from January to April. “I was hoping that students who went in thinking they would provide a service to the Haitians would actually come to learn more about another culture through 10-15 weeks of exposure without being face to face,” Pisani reports.

While the International Business Class is offered annually, Cultural Differences is offered every semester. Pisani expects to repeat the class, building relationships not only with Haiti but with different cultures.

Student Brandon June describes how interaction took place on his team. “We would talk with Skype in rooms that had big screen computers.” That was not without complications, however. “Most of their meetings we spent the first half hour trying to get them to hear us or for us to hear them.” But Brandon deems the effort worthwhile. “Haitians like to play sports. They love to be in community and hang out. Religion is very important to them,” he describes. “But really, the Haitians are just great people who I loved to talk to every week.”

“Towards the end of the semester it didn’t feel like an assignment…it felt like something with a greater purpose than school,” said Joshua Scramlin. Language practice was only the half of it. “The biggest challenge,” says Joshua, “was to wrap my mind around the idea that most of the things that occur in my everyday life are foreign to the people I was speaking to. It could be anything as innocuous as a parking ticket, seeing a movie in a theater, or ordering a pizza delivered to my house.” He told how the awareness of extreme poverty in Haiti initially provoked guilt. “But we worked past that and looked at these people as just that: people.”

Joshua remembers a personal moment in which he realized barriers had come down. “The Central Michigan University community endured a shooting on campus and a manhunt that lasted almost a day.” One of the Haitian students that Joshua had friended on Facebook heard about the CMU shooting. “The student contacted me to see if I was okay. The Haitians are not as disconnected from the world as one might think,” Joshua remarks.

Mario Damis, HAPI’s Information Technology Director and Education Coordinator is impressed with the progress of ESL students resulting from the Skype interactions with the students in Mt. Pleasant. He writes, “This partnership was a good opportunity for students to improve their English skills while learning more about American culture and sharing their own.” Mario has invited Professor Pisani to send a CMU team to HAPI for future face-to-face encounter. Damis adds, “The exchange program was such an encouragement. Friendship is the most powerful force.”

Valerie Mossman-Celestin, Co-Director of Haitian Artisans for Peace International, explains that the artisan aspect of HAPI is very complex. She says, “I am grateful for the hours of work the CMU students invested in bringing this project to fruition.” What the students began – an Etsy storefront, a Quickbook interface and a new website – will now be developed further and maintained by Haitian staff and United Methodist Mission Volunteer, Kathy Martin. Kathy was an important bridge in the project, spending part of the semester with students at CMU and part of the semester with artisans in Haiti.

Valerie appreciates the enthusiasm and business skills that the CMU project has contributed. “Profit margins on hand-made products at fair wages which require international shipping of raw inputs and finished goods are slim,” she notes. “With these new sales portals HAPI hopes to encourage greater sales volume to fair trade retail outlets as well as open up retail sales through Etsy.”

The students echo Valerie’s appreciation. “I truly enjoyed my position as team leader and felt that I was able to see everyone’s work come together to make change,” says Cecelia Kassak. “We all expanded our perceptions and tried to imagine ourselves in the shoes of the artisans and what we can do to help alleviate the poverty cycle in Haiti.” Joshua Scramlin sums the experience up like this. “We did not define the Haitians by their culture’s hardships and we hope they did not define us by our culture either.” And he concludes, “I can honestly say that in my four years on campus, I had never encountered a project as interesting and challenging as I did in Dr. Pisani’s course.”

As he looks ahead to future partnerships that cross boundaries and generate hope, Professor Mike Pisani says, “I didn’t do anything. It’s all the students. I just was a bridge that brought people together.”